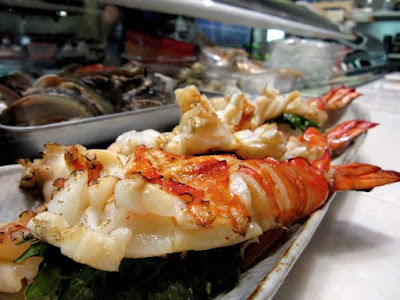 Nadine Kam photos
Black tiger prawns were torched and served in that perfect crunchy/sweet state between being sashimi and fully cooked.

Sushi Murayama is one of the few restaurants lately, to open as an instant hit, thanks to chef/owner Ryuji Murayama’s sterling reputation at Tokkuri-Tei. His first solo restaurant is therefore packed, so don’t expect to get a reservation right away.

The biggest draw may very well be the chef himself. Born in Japan and raised here since 3, he’s more local than Japanese so you don’t have to worry about any language barriers. He spent three-and-a-half years honing his sushi skills in Japan, but in another life, he could have been a comedian as he keeps jokes coming, while welcoming each guest as a long-time friend.

In the age of the celebrity chef, he brings the one thing to the table that others have forgotten in recent years, hospitality. He leaves guests feeling good, and that positive vibe carries over to the entire experience. 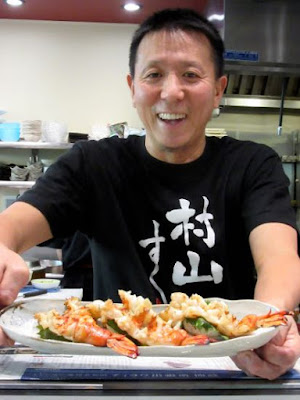 Chef Murayama presents the prawns at the sushi counter.

The restaurant has a decent sized izakaya menu, but it’s the sushi that stands out, and the chef’s $75 per person omakase menu is a good place to start for those game to try anything. At any rate, it will lift you out of ahi mode to try many other types of fish.

Considering that, squeezing in between others’ reservations, I had an hour to complete this menu of chef’s selections, Murayama put out 10 selections at a rate of one selection about every 6 minutes. That’s some speedy work. The type and number of selections vary with availability of fish and shellfish, and perhaps your enthusiasm level. If you’re gushing over every dish, chef may just want to keep the praise coming. 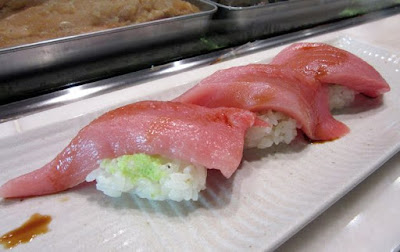 The presentation is more fish market vendor than artisan, but few would complain about the huge slabs of fish Murayama layers over rice, including a generous cut of premium chutoro, the tuna’s fatty underbelly, the starting dish of the day’s omakase. 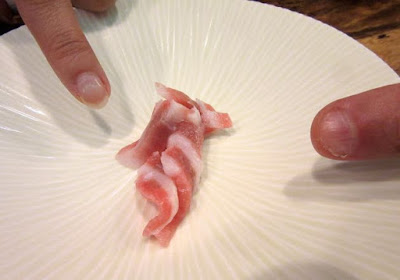 It was the opposite of my first experience with this chef and chutoro, ordered as sashimi. When he presented a plate with just a pinky finger size portion of fish, my friends and I were like, “What the …?” before realizing he was just toying with us. 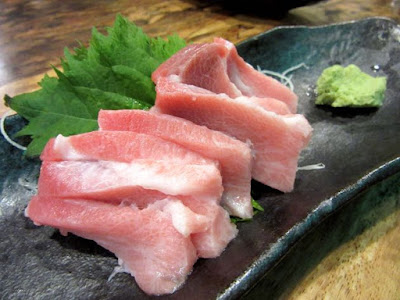 The full-size serving chutoro sashimi, part of another dinner exploring the izakaya menu. 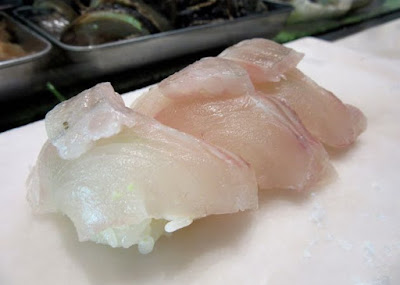 Next up on our omakase was hirame, or fluke, topped with crunchy engawa, or fluke fin, for extra texture. It isn’t often that engawa shows up on the table, so I felt very privileged. Murayama dusted the serving tray with snow-mimicking salt, a reminder that winter fish from Japan are at their most voluptuous state of fattiness, prompting us to try to get in as many visits as we can before warmer weather sets in. That little touch of salt was all this fish needed. 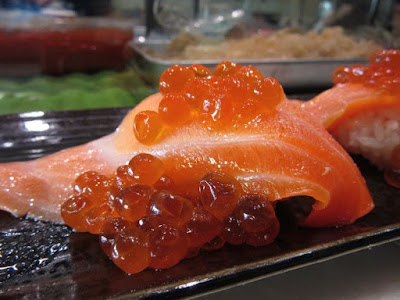 A perfect marriage of sake, or salmon, and ikura. Not a single morsel of the pearl-size roe went to waste. 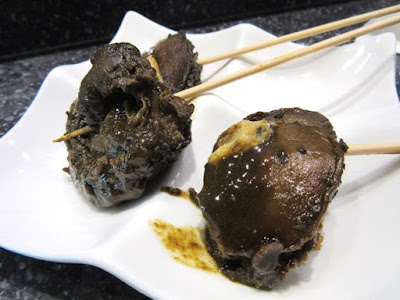 For a change of pace, Murayama next introduced skewered abalone that had been marinated four hours in a secret sauce that likely included soy sauce, mirin and awabi kimo, or abalone liver for the stinky brininess prized by true seafood afficionados. 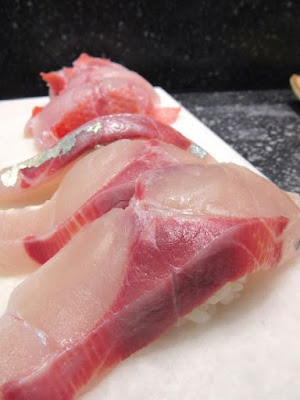 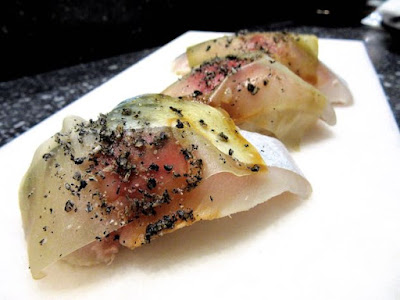 Vinegared saba was presented kobujime style, layered with a thin sheet of translucent kelp for its umami properties, then dotted with sesame seeds. This was my favorite selection of the evening. 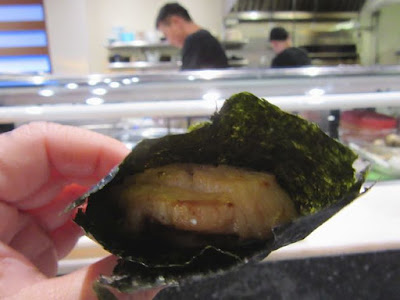 I spy hotate. Last to arrive were the handrolls, one a grilled scallop simply wrapped in nori, followed by a cone of rice, negitori and minced takuan that brightened the fish. 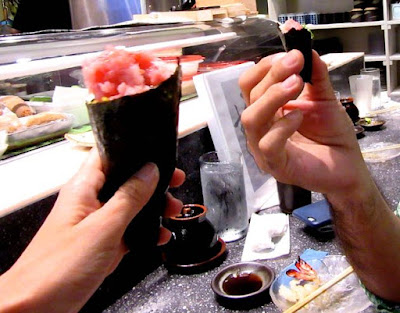 That negitoro roll could be big or small, depending on whether the chef likes you. Haha! 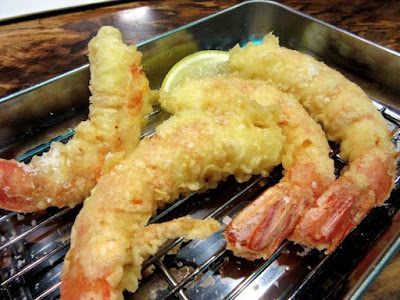 I left more impressed than on a first visit going the izakaya route and learning fried is not a forte. Shrimp used in tempura ($13.50) is plump and sweet, but more flaccid than crisp. Next time I’ll try the smaller koebi ($7.50). 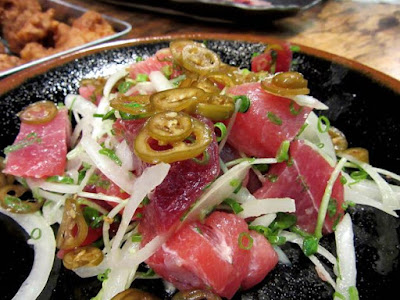 And for $16.50, serrano poke was no revelation. It was just standard poke sprinkled with the sliced peppers. 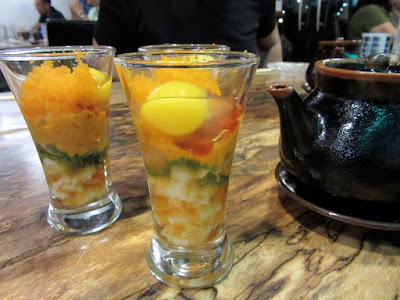 Whet your appetite with an uni shooter that’s almost too much to take in with one gulp, with its layers of fish, negi, ikura and quail egg. At any rate, I prefer to pluck at the morsels one by one for full value, rather than chugging without tasting them. 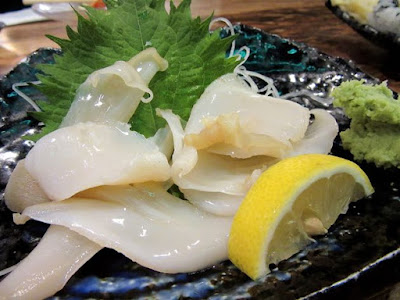 I did enjoy mirugai (geoduck or giant clam) prepared two ways, sashimi style ($30), above, and sautéed in butter ($15), below. The former is briny and crunchy, the latter sweet and chewy. Again, true shellfish afficionados will prefer the sashimi. The latter I could keep shoveling in my mouth like popcorn or candy. 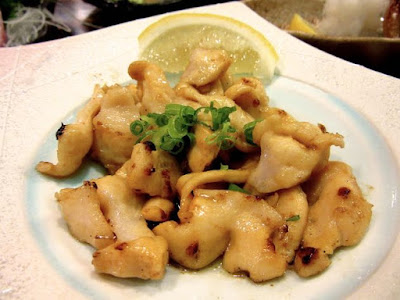 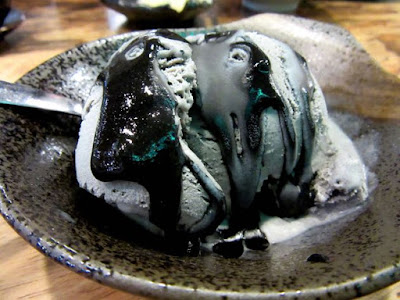 —————
Nadine Kam is Style Editor and staff restaurant critic at the Honolulu Star-Advertiser; her coverage is in print on Wednesdays and Thursdays. Contact her via email at nkam@staradvertiser.com and follow her on Twitter, Instagram and Rebel Mouse.
Posted by Nadine Kam at 2:05 PM