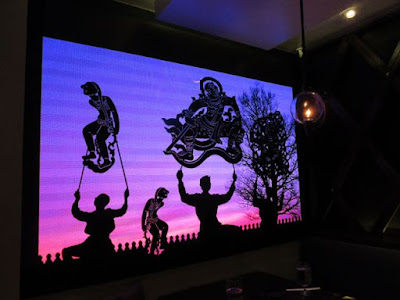 Nadine Kam photos
Imagery of Thai shadow puppets line the space designated as the “inner palace” at Noi Thai Cuisine, with an interior modeled on the concept of the Thai royal palace.

It was a fun evening if you consider there was plenty of food and drink to go around in the beautiful space, Thai music and dance, and interactive puppetry, even if one puppet got a little out of hand in feeling up the guests. Naughty!

Ten percent of all proceeds from meals through Jan. 29 will be donated to Kapiolani. Then from 5 to 9 p.m. Jan. 30, local celebs will be the servers, with all gratuities turned over to Kapiolani. 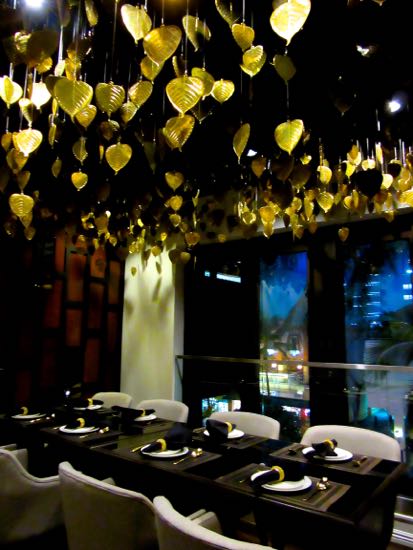 The restaurant is the first upscale establishment from the Bai Tong family of six restaurants in the Pacific Northwest. The original Bai Tong in Seattle was a favorite stop for Thai Airways crews at Sea-Tac airport.

During a trip to Hawaii, co-owner Chadillada “Noi” Lapangkura fell in love with the islands and longed to bring her family’s Thai dishes here, envisioning a royal experience. The restaurant is build with the idea of the Thai palace in mind. The space is divided into outer, central and inner palace spaces, including a protected “War Room,” which serves as a private dining/meeting room, as well as a Pavilion Room festooned with golden bo leaves symbolic of the Bodhi tree under which the Buddha found enlightenment.

Minimums apply for meals in two private rooms, the Golden Pavilion and the War Room, accommodating eight to 10 people, with advance reservations

Among Thai specialties offered during the grand opening were egg yolk sweets tong yod (golden drops) and foy tong (golden threads). Their golden color symbolizes wealth, fame and fortune. Those flowers are carved from vegetables, by the way. And the sweets look a lot like those I saw when I was in Bangkok. 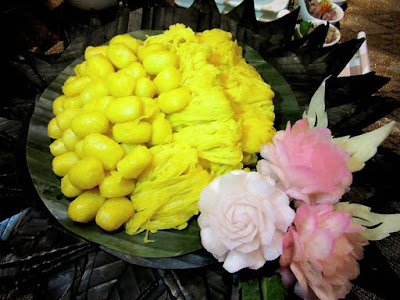 Among Thai specialties offered during the grand opening were egg yolk sweets tong yod (golden drops) and foy tong (golden threads). Their golden color symbolizes wealth, fame and fortune. Those flowers are carved from vegetables, by the way. And the sweets look a lot like those I saw when I was in Bangkok. A little peek here.

There is also a chef’s table that offers an up-close view of the kitchen, where co-owner/executive chef Settapong “Pag” Nilket, head chef Jutamas Kanjanamai and sous chef Jamrus Singduang aim to present cuisine worthy of Thailand’s royal family, for whom they have cooked. Those who request this glass-enclosed private room will enjoy a special off-the-menu meal prepared for up to six guests.

Since testing the Noi Thai concept in Hawaii beginning with its soft opening in October, the family is proceeding to open next month in Downtown Seattle, near Pike Place Market, and a third is planned for San Francisco later this year. 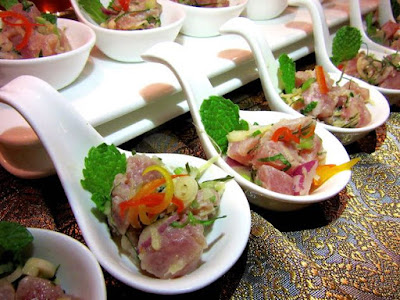 Food for the event was presented in pupu form, such as this ahi salad. Below is salad as presented when I first visited in November. 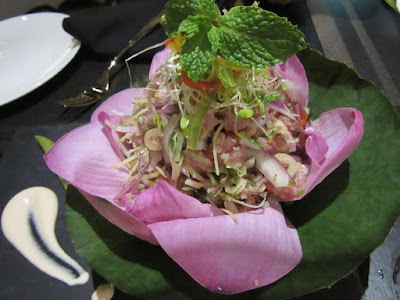 During regular dinner service, the ahi salad is presented on a lotus leaf and lotus petals, which are edible. 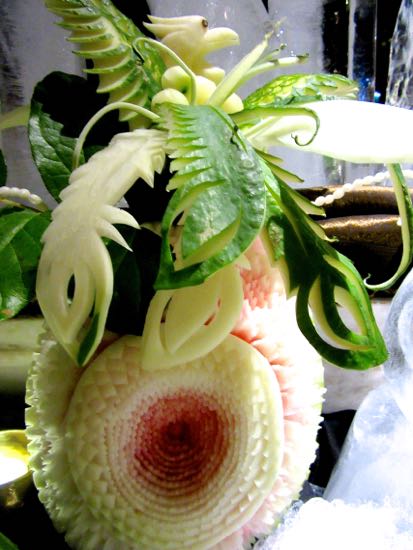 The room was filled with examples of their vegetable- and fruit-carving skills. 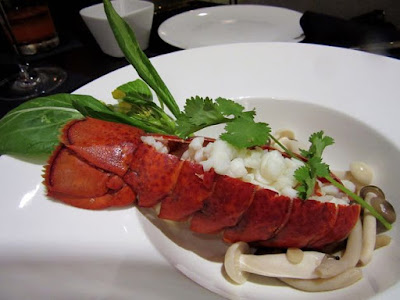 Presentation here is elaborate. This is the first look at a dish of tom yum lobster; $32. Where's the soup, you ask? ... 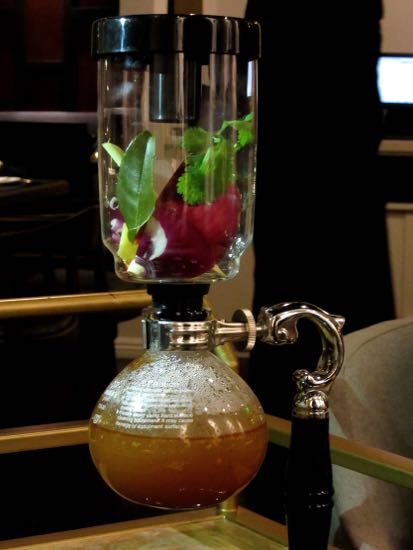 … The spicy sour soup is presented in this device that sends the steaming broth up to meet the mixture of kaffir lime leaf, lemongrass, cilantro and onion for infused flavors eventually poured over the lobster. 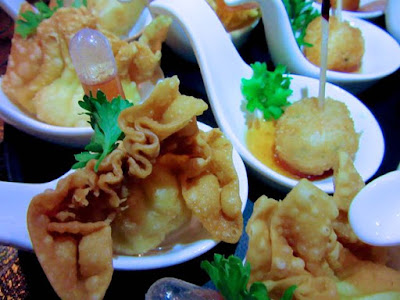 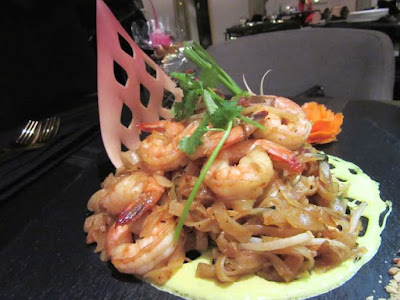 Prawn pad Thai is $29 on the regular menu. 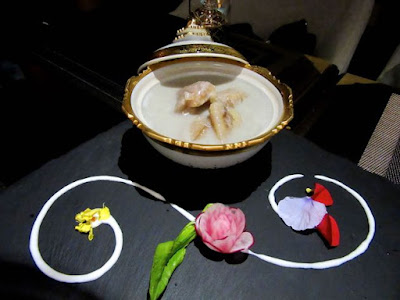 A regular dessert of green banana simmered in coconut milk. 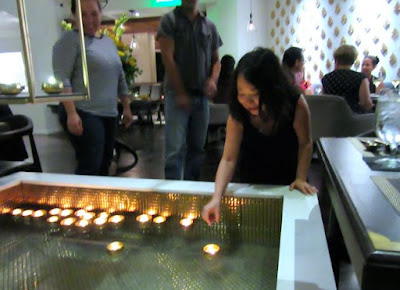 If you wish, you may ask to light a candle, symbolic of letting go of transgressions and negative thoughts, and opening oneself up to wishes coming true, as I am trying to do here. 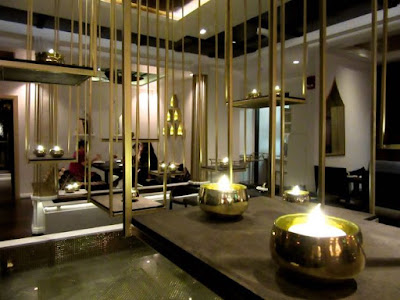 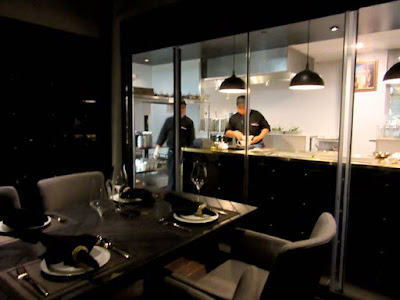 The private chef’s table overlooking the kitchen, where you can arrange for a special feast of dishes that aren’t on the regular menu.