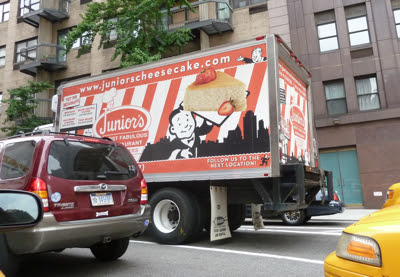 Nadine Kam photos
Spied the Junior's Most Fabulous Cheesecake & Desserts truck on my way into New York, sparking a quest to devour that slice of heaven.

We see thousands if not millions of things a day—from insects to leaves on trees—but we're so accustomed to the daily visuals and inconsequentials like our regular tube of toothpaste or the alarm clock that gets us up—that few of the daily objects that surround us actually register in our brains.

Upon my bleary eyed 11 a.m. arrival (5 a.m. Hawaii time) in New York June 21, of course I took stock of the yellow cabs and buildings en route from La Guardia to The Plaza, but the one thing that registered most strongly was the cool retro Junior's truck over in the next lane.

It was pure 1950 visuals, appearing to date to the year Junior's Most Fabulous Cheesecake & Desserts was founded by Harry Rosen at Flatbush and Dekalb aves. in Brooklyn.

I wasn't hungry when I spotted the truck, but of course that put the idea of cheesecake in my head, and when it comes to food, I tend to get obsessed by the chase. It was just a matter of time before I would be sitting at a table with a piece of Junior's cheesecake in front of me. 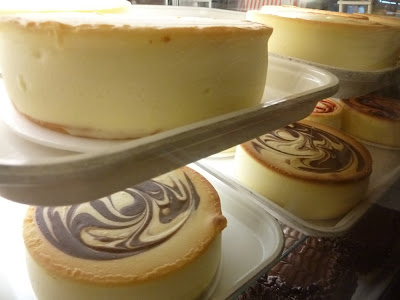 Heading for Connecticut via train, I had a chance to get a bite of the cheesecake at Grand Central Terminal, where I was also hoping to pick up a pastrami sandwich. I remember the layers of pastrami being three to four inches thick last time I was there. It's something I always dream of because the typical Hawaii pastrami sandwich is very slim. Alas, there was no pastrami to be had on a Saturday! So I settled for a delicious corn chowder from Hale and Hearty Soups, which left plenty of room for dessert!

Junior's has two locations within the Terminal, on the lower Dining Concourse, and in the Grand Central Market, where you can pick up anything you could want for a trip into or out of the city, whether for snacking en route, omiyage, or bringing home to your fridge, including beautiful produce, chocolates, jams, breads, pastries, cold cuts and cheese.

I took a chance ordering the single-portion cupcake size Little Fella, wondering if it would be as good as a full-size cake, or somehow dry around the edges. It was fabulous, moist and fluffy, the amount of raspberry swirl just right. I plan to try the chocolate when I return to the city.

You can order a cheesecake online: www.juniorscheesecake.com It's an expensive proposition, since the cheesecakes will cost you about $33 to $37 without even adding postage! If it's just a slice you want, I believe Wolfgang's Steakhouse by Wolfgang Zweiner, in Royal Hawaiian Center, serves Junior's cheesecake for dessert! You can pick up a slice of Cheesecake Factory cheesecake while you're at it and do a side-by-side comparison. 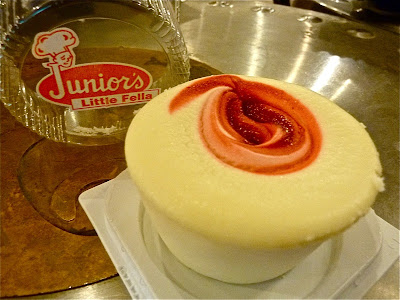 A little cheesecake goes a long way, so if you're not sharing, a cupcake-size Little Fella portion, about $4.95, is just the right size.
Posted by Nadine Kam at 8:16 PM No comments: