Through the years, I've heard people complain about the dearth of authentic Mexican fare in Hawaii. Well, they can now put their money where their mouths are. All of a sudden there are two new entries to the scene, both authentic and rather equal in scope. The one you gravitate to comes down to a matter of style and/or geography, with the glitzier Pablo's Cantina in Ward Centre, and the other, El Charro Mexicano in the Aiea Shopping Center.
I love that at both restaurants you'll find nothing generic, but sauces rich with the flavor of toasted chile peppers, everything made from scratch. 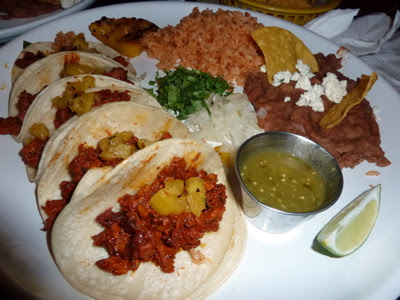 A year ago I learned of plans for a Pablo McGinty's Mexican-Irish restaurant to open on the site of the former Compadres at Ward Centre. It sounded dreadful.
The deadline for the restaurant's arrival came and went, and by the time the restaurant finally opened a few weeks ago, it had undergone a name change to the less questionable Pablo's Cantina. Even so, its menu and signs still refers to a namesake character, Pablo McGinty.
They didn't have to try quite so hard when at its heart, Pablo's cuisine is as authentic as it gets. In the past, that would have been all the selling point needed to draw a crowd, but given the size of this restaurant and the reality that people are not dining out as much as they once did, it's going to be more difficult filling this space than it was in Compadres' day. The result is a restaurant with a split personality, and it'll be tricky trying to bridge the gap between the slow pace of authentic cuisine and the fast demands of the Taco Tuesday set.
Beyond mere tacos and burritos, the restaurant -- with a casita-inspired setting full of pottery from various regions of Mexico -- pays homage to Mexico's diverse food culture, featuring regional specialties from around the country, with everything prepared fresh daily on the premises by chef Mario Lopez (not the actor), who hails from Mexico City.
For starters there is queso fundido chorizo, melted Jack cheese layered with spicy chorizo sausage and served with pico de gallo and flour tortillas ($9.95). Who doesn't love cheese? Try to balance that with the better-for-your-health ceviche de la casa ($10.95), the marinated fish strong on lime with a little kick from cilantro and serrano peppers.
If dishes are not spicy enough, take your pick of hot sauces from the restaurant's wall of flame. And if that's not enough, the kitchen staff can also whip up a batch of chopped habanero to add at your own risk. 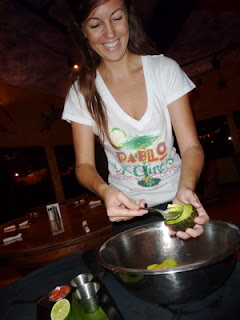 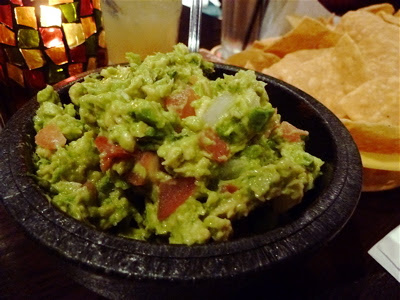 If you like pork, look no  further than to an entree of Jalisco-style, fork-tender roast carnitas ($13.95), better than our state favorite of kalua pork. Cubes of pork also figures in chile verde ($13.95), in a rich, pleasantly tart tomatillo-chili sauce.
Chiles rellenos ($13.95) in a red chile sauce is another highlight. It comes stuffed with your choice of spicy beef, shredded chicken or cheddar/Monterey Jack. Even so, there can be inconsistencies. The first time I had it, it arrived hot and plump; the second time it arrived cool and deflated.
Speed is an issue with dishes cooked from scratch. On a second visit it took a good 15 to 20 minutes for any food to arrive, and when it did, two appetizers and two entrees arrived at the same time. At a Mexican restaurant, you don't want that much food in front of you at once. Also, during the wait you can easily fill up on chips and salsa, which defeats the purpose of ordering appetizers in the first place.appetizers in the first place.


If you're really hungry or are in the mood to share, steak a la Tampiqueria ($24.95) is a platter the size of a banana leaf laden with about six ounces of grilled Angus steak, a chicken enchilada, a cheese chile relleno, grilled nopale cactus (a little similar in flavor to cooked green bell pepper with a more rubbery texture) and all the usual sides of Mexican rice, refried beans, guacamole, sour cream and tortillas.
Similarly, for those who like pupu-style grazing, the molcajete ($24.95) is something I would have loved to try. They weren't serving it because the proper bowl hadn't arrived. It would have been filled with green sauce for dipping its other contents of grilled beef, chicken, chorizo, green onion and cactus, served with avocado, cheese and tortillas.
Of interest to bar hoppers, star mixologist Joey Gottesman had a hand in developing Pablo's bar concept. Continued heat in winter months calls for the refreshment of Roasted Pineapple Margarita made with fresh roasted and caramelized pineapple, and the Chipotle with roasted jalapeno, tequila, triple sec, house-made sweet-and-sour, and fresh orange and lime juices.
Chase straight shots of tequila with the traditional Guadalajara sangrita, a tomato-based nonalcoholic shot with the flavor of a Bloody Mary, meant to complement the pepper and citrus flavors of agave tequila.
"Taco Tuesdays," initially established by Compadres, returns next Tuesday. Other specials include "Monday Madness" happy hour with beer, drink and appetizer specials coinciding with football night, pau hana happy-hour drink specials from 4 to 7 p.m. and 10 p.m. to 1 a.m. Friday nights, and "Sunday is Fun Day," during which kids under 12 eat for $5. 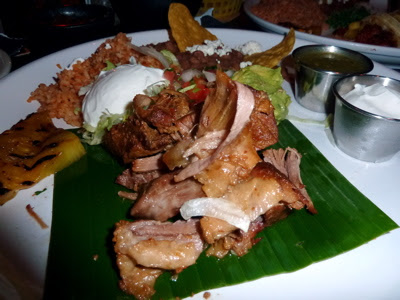 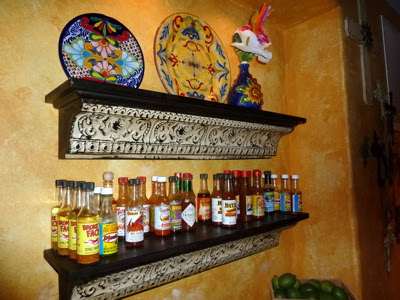 The wall of flame. 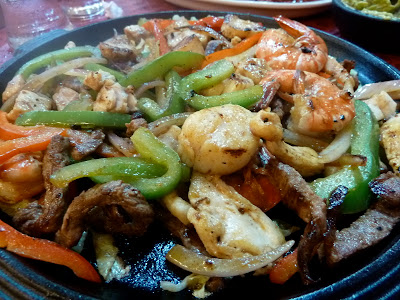 Hours: 11 a.m. to 9 p.m. Mondays to Thursdays, 11 a.m. to 10 p.m. Fridays and Saturdays, and 11 a.m. to 8 p.m. Sundays Cost: About $25 for two
At El Charro, whose owner comes from Mexico City, English is a second language. This requires patrons proficient in understanding a menu because it may be difficult to get servers to answer questions.
Aside from that, I enjoyed the food here immensely, though the ambience is strictly understated mall.
Just as at Pablo's, you'll find a starter of queso fundido of melted jack and mozzarella cheese ($5.50), with chorizo ($6), shrimp ($8) and scallops ($9) as topping options. Again, it's easy to polish this off while waiting for your entrees, but try to resist or you won't be hungry when your entree arrives.
Similarly, ceviche ($8.99) also comes with shrimp or mahi options.
Pork lovers have the option of chile verde or chile rojo ($10.99). The pork flavor comes out stronger with the green tomatillo sauce than the red, in which the flavor of Anaheim chiles dominates. More of the character of Mexican cuisine is revealed in the depth of chocolate, chiles and spices that go into the chicken mole sauce ($10.99).
It's not just the entrees to get the attention. The Mexican rice accompanying entrees is perfumed with garlic, and guacamole and pico de gallo is always fresh and vibrant to the eye and palate.
One of the major dishes, for those who find ease in communal dining, is the Parrillada ($21.50), a platter that easily feeds three adults or perhaps a family of four (two adults and two young children). The menu described grilled chicken, steak and chorizo, which is quite different from what it really is, more like a glorified fajita platter, with chopped steak sauteed with shrimp, scallops, bell peppers, onions and mushrooms, all intended to be wrapped with accompanying rice, guacamole, pico de gallo, refried beans and sour cream on corn or flour tortillas.
It wasn't as great as the smaller a la carte plates, but if you're on a budget, it's quick and easy, and the sizzling platter is dramatic.
Nadine Kam's restaurant reviews are conducted anonymously and paid for by the Star-Advertiser. E-mail nkam@staradvertiser.com.

Posted by Nadine Kam at 1:30 AM No comments: