Set your own price at Fatboy's 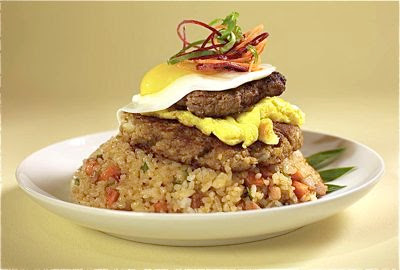 Fatboy photo
Fatboy’s Ali’i Fried Rice is a take on the Loco Moco, featuring fried rice topped with homemade corned beef hash, hamburger patty and eggs. How much would you pay for this baby? Well, for two days, you can set your own price.

Fatboy’s restaurants islandwide are erasing all prices from their menus March 26 and 31, and are letting customers set their own prices on the two days. Stores are located in Kailua, Kalihi, Keeaumoku, Waipahu and at Pali Golf Course.

The “No Prices for Hawaii’s Keiki” promotion is a fundraiser for the Kapi‘olani Health Foundation in support of its Campaign for Hawai‘i’s Children, to rebuild Kapi‘olani Medical Center for Women & Children. All proceeds over cost will be matched by Fatboy’s and donated directly to the foundation.

The promotion is the brainchild of Fatboy’s owner Carroll Ung and his wife Rariyo, whose daughter Leah was born at Kapi‘olani. Shortly after her birth, a blood test showed that Leah’s platelet count was critically low at only 10,000 (normal is 150,000).

Leah is now a thriving 2 year old and her first few weeks are a distant memory, but the care the family received at Kapi‘olani inspired Ung to create the “No Prices” fundraiser.

Carroll and his father founded the first Fatboy’s—Caroll's childhood nickname—in Kalihi in 1999 with a goal to serve a higher-end plate lunch with fresh local ingredients and gourmet sauces. They have since expanded to five restaurants on Oahu.
Posted by Nadine Kam at 5:01 PM No comments: 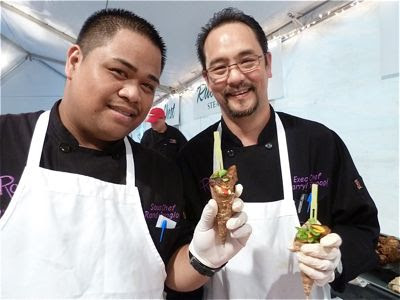 The Hawaii Foodbank was host to "Great Chefs Fight Hunger," an event that brought together 33 restaurant and beverage companies, and hundreds of foodies to raise funds to feed the hungry.

The event took place March 23 at the Hawaii Foodbank Warehouse at 2611 Kilihau St., where guests got to see where the work of preventing more than 183,000 of Hawaii's population from going hungry continues throughout the year.

In addition to providing food for the event, 12 of the food and beverage purveyors, along with businesses and organizations including Bishop Museum, Hilo Hattie, Maui Divers Jewelry, Paul Brown Salon and Reyn Spooner, also donated culinary experiences during a silent auction that added to Hawaii Foodbank's coffers.

Here's a look at some of the dishes presented during the event: 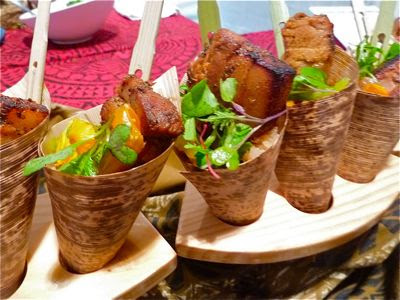 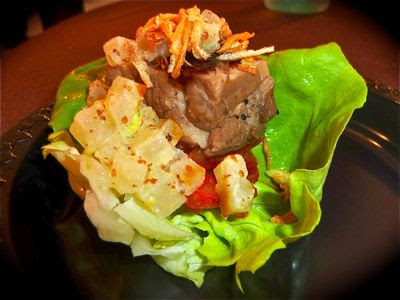 We can usually expect a fish dish from Morimoto but a Korean-style pork belly lettuce wrap from Andy Reagan was a nice departure. With papaya and cabbage kim chee, apple mustard relish and fried gobo. 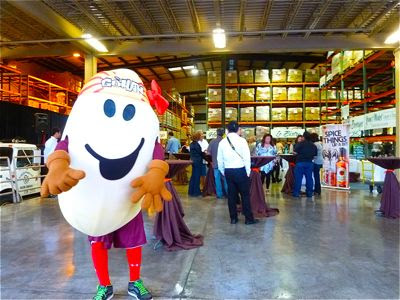 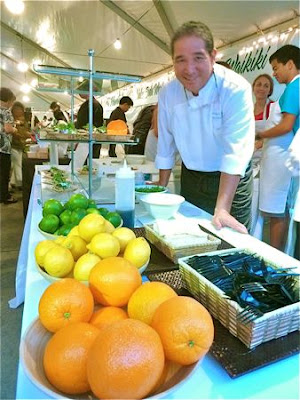 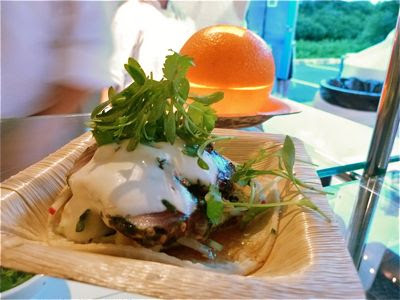 With all the meat in evidence, Vigilla's offering was a refreshingly light furikake seared ahi taco with edamame hummus, pineapple Asian slaw and spicy chili pepper aioli. Very yum. And the lamp is an eco-friendly halved orange. 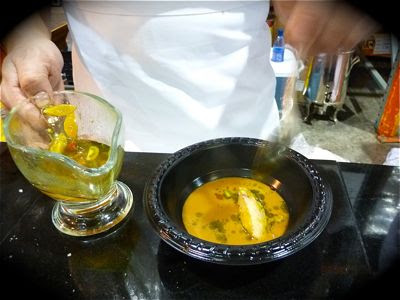 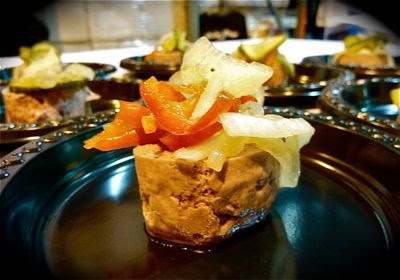 Independents like the Whole Ox and Pili Hawaii were right there with the big institutions. This is Whole Ox chef Robert McGee's bacon braunschweiger with whole grain aioli and house pickles. 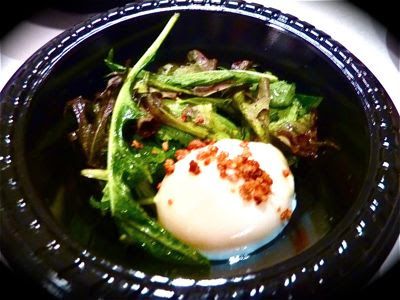 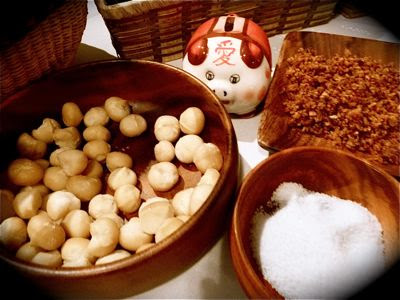 Pili Hawaii's display of whole mac nuts and the toasted ground nuts that went into the salad dressing. 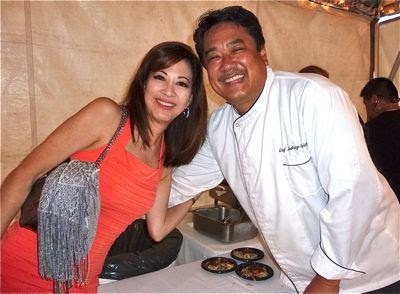 Chef Rodney Uyehara of HASR Bistro with one of his fans, Kat Oshima. 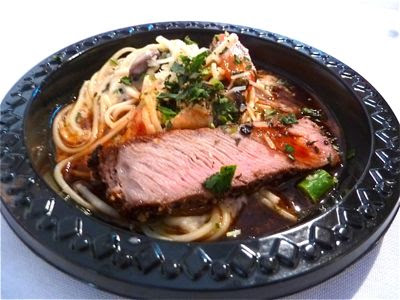 Uyehara's contribution to the event, Harris Ranch Steak #11, over stroganoff egg noodles with brandy cream sauce. In this grab-and-go setting, he was trying to accommodate requests for doneness. Here, a perfect medium. 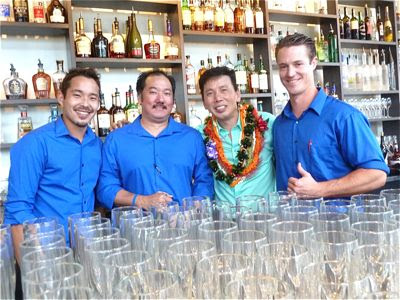 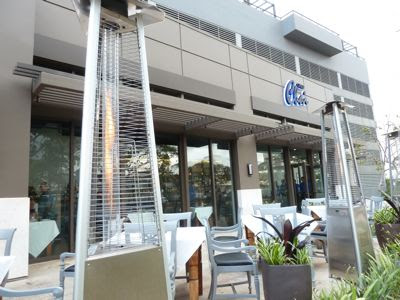 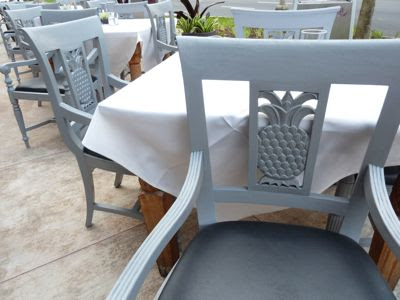 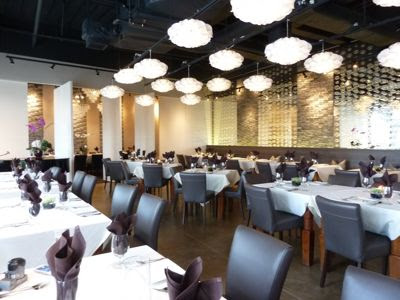 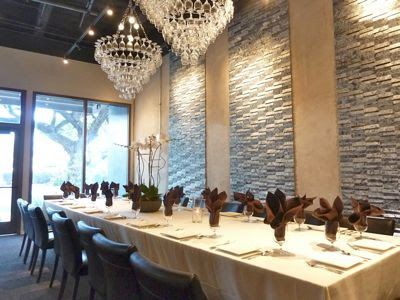 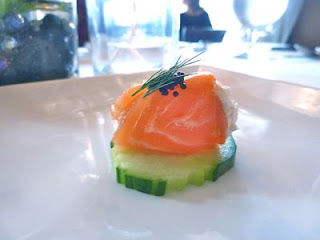 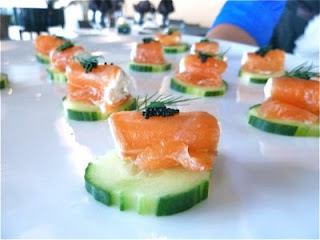 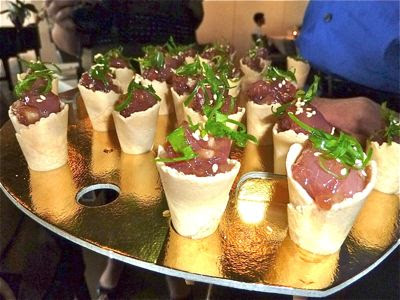 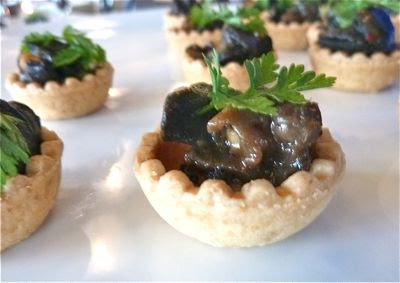 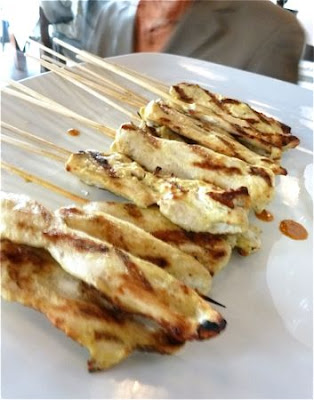 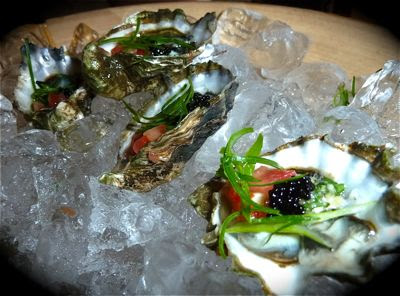