Go Italian to feed a kid 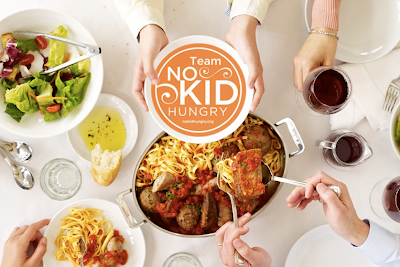 To counter all the effects of dining out for a living, I try to be kind to my body on "off" days, sparing myself from salt, sugar and fat overloading.

I could never do all the work involved in going as far as making the mac nut ricotta in the raw vegan Living Lasagna at Licious Dishes, but I really love Sylvia Thompson's lasagna and it inspired me to sub the usual layers of pasta with layers of sliced zucchini. To make the slicing task easier, you can use a mandoline, but I find it just as easy to use a knife for a small quantity.

My husband sounded leery about the idea and likes the pasta, so in a first pass, we compromised. I did the bottom layer with pasta, and middle and top tiers with zucchini, and neither of us missed a thing.

The beauty of any lasagna recipe is that they're quite forgiving, and this doesn't have to be vegetarian at all. You can muse a meat filling if you want, but you an feel a little better knowing you've included more vegetable than you would have otherwise.

I'm sharing this recipe after being invited by Romano's Macaroni Grill to share an Italian recipe toward a goal of ending childhood hunger.

The restaurant partnered with Share Our Strength’s No Kid Hungry campaign to connect kids to 1 Million Meals, 500 meals per post. According to Share our Strength, one in five, or 16 million children, go hungry in America on a regular basis.

The long-term cost to society are:

>> Nationally: According to a report by the Center for American Progress and Brandeis University, “hunger costs our nation at least $167.5 billion due to the combination of lost economic productivity per year, more expensive public education because of the rising costs of poor education outcomes, avoidable health care costs, and the cost of charity to keep families fed.”

>> Individually: The center also calculated that “the impact of being held back a grade or more in school resulting from hunger and its threat resulted in $6.9 billion in lost income for 2009 dropouts in 2010 and that high school absenteeism led to a loss of $5.8 billion, also in 2010. In total, food insecurity led to a loss of $19.2 billion in (lifetime) earnings in 2010.”

>> Your cost: “it cost every citizen $542 due to the far-reaching consequences of hunger in our nation.” If the number of hungry Americans remains constant, “each individual’s bill for hunger in our nation will amount to about $42,400” on a lifetime basis.

Readers can also visit the restaurant and donate $2 to receive $5 off their next meal. For more information, visit http://www.1millionmeals.com/

Boil the pasta; remove to a plate. Spread about 2 tablespoons of sauce in a 13-by-9 Pyrex baking dish. Spread pasta on dish
Saute the onion and garlic in olive oil. When caramelized, add the spinach. Season to taste.
Layer one-half of filling over pasta. Beat eggs wih ricotta, and layer half of this mixture over vegetables, followed by a layer of one-third of the sauce.
Layer half of zucchini strips.
Create another layer of filling, ricotta, sauce and zucchini.
Cover zucchini with remaining sauce and sprinkle Parmesan over all.
Bake at 350 degrees for 40 minutes. Allow to rest 15 minutes before serving.
Makes 8 servings.
Posted by Nadine Kam at 12:30 PM No comments: 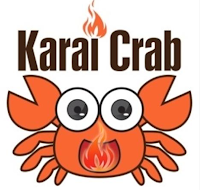 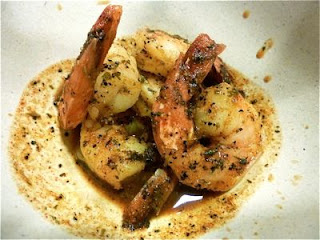 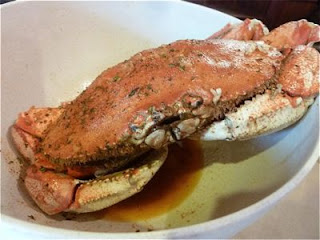 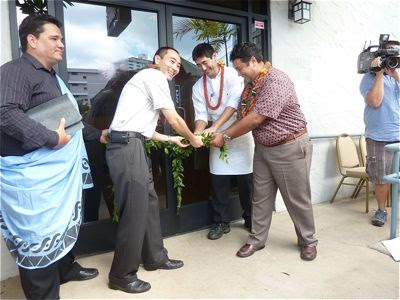 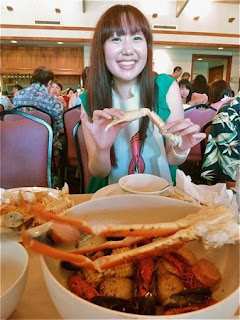 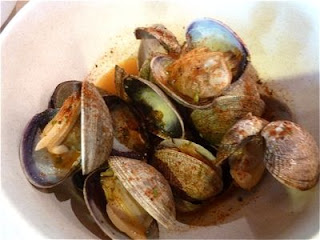 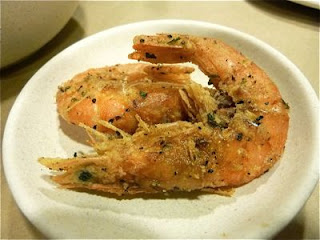 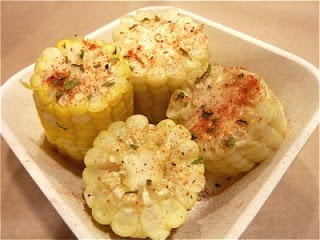 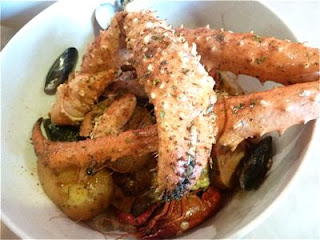 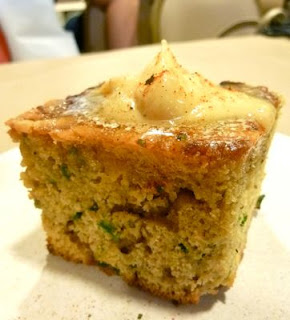 Bacon-jalapeno cornbread is good for cutting the heat of the chilies.
————
Karai Crab is at The Willows, with separate makai building and entrance, 901 Hausten St. Call 952-6990.
Posted by Nadine Kam at 7:19 PM No comments: 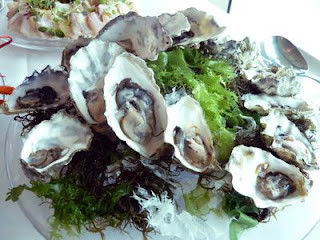 Nadine Kam photos
Oysters that are part of the 53 Seafood Showcase platter. This was the grand opening selection. The actual $30 seafood platter will be portioned for two.

Now open on the site of the former John Dominis restaurant is 53 By the Sea, Honolulu's latest Italian restaurant helmed in the kitchen by a Japanese chef, Hiroshi Hayakawa.

No one who's ever been to John Dominis will see a trace of the former restaurant here. It's given way to a $16 million Mediterranean-style chapel-looking building that will also serve as a wedding venue marketed to Japanese lovebirds.

The 200-seat Italian restaurant is on the ground floor, and a ballroom staircase will lead to the Terrace by the Sea. The two-story, 18,825-square-foot building features two wedding chapels and six banquet rooms in an unbeatable setting right on the water's edge in Kakaako, with a straight-ahead view of Diamond Head.

Whereas the former restaurant was built close to the water, with waves splashing against glass walls, the new restaurant is raised, with glass doors and outdoor seating for those who want to actually feel the ocean breeze and take unobstructed photos.

The restaurant is open for dinner, and lunch service is set to begin around Sept. 26. During a media reception this morning, the restaurant offered a sampling of its menu, with entree prices ranging from $18 for spaghetti Bolgonese, to $42 for grilled Maine lobster with fried island vegetables.

*Note that the dishes below were presented in group portions, and not the actual individual portions. 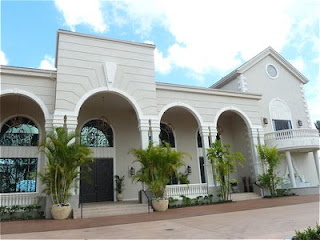 The exterior of the new 53 By the Sea restaurant built on the site of the former John Dominis restaurant. 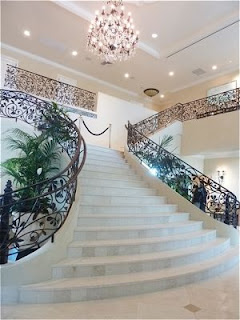 The ballroom staircase leading to the wedding chapels. 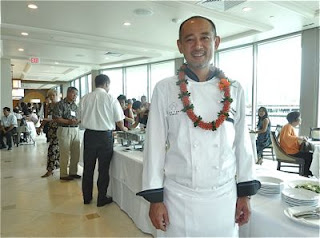 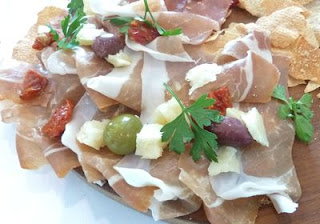 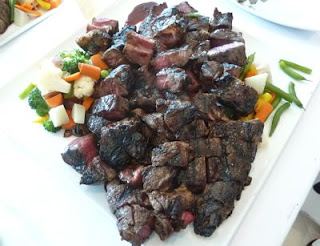 Among the beef offerings is grilled Black Angus filet mignon. 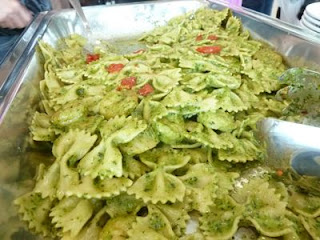 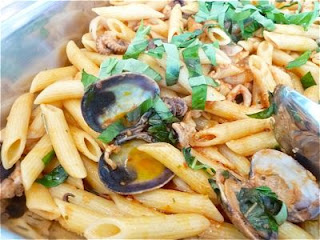 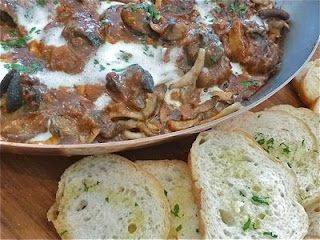 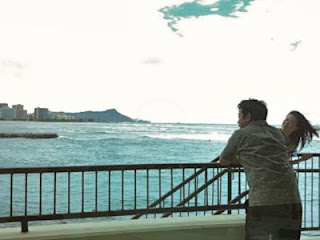