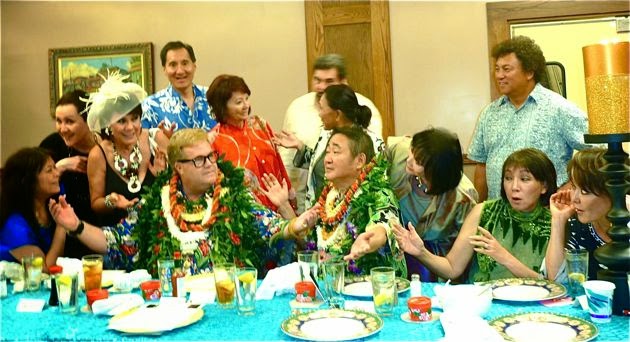 Nadine Kam photos
Designers Eric Chandler and Takeo, center, gathered a few friends for a last supper May 22 at Likelike Drive-Inn, with apologies to Da Vinci. They are retiring to Washington.

Where would you go for a last supper if you were leaving town for good or for an extended period of time?

For designers Eric Chandler and Takeo, who are retiring to Buckley, Wash., they could have gone to any of their upscale haunts. But their destination of choice was Likelike Drive-Inn, site for a last supper with friends that took place May 22.

It was a logical choice for the designers, who recalled many a late-night strategy meeting held over roast pork or oxtail soup, with Miss Hawaii USA hopefuls. Their frequent mantra was, "Life is short, eat dessert first," when it came to Likelike's hot fudge sundae, custard and lemon chiffon pies.

On the menu created by chefs Kenny Tateyama and Chris Okuhara were some Likelike classics, such as corn chowder and fried rice—served for the occasion with an over-medium egg on top—and specialties such as baked short ribs with Spanish sauce and steamed opelu served whole local-style in a soy-sesame sauce and topped with slivered carrots, shiitake, ginger and green onions. 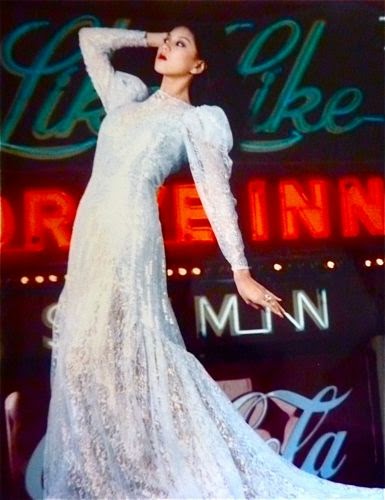 Likelike Drive-Inn's famous neon sign was the backdrop for this photo of Nadine Tanega when she was Miss Hawaii USA 1994.

Pamela Young compiled a video of some of the footage of the designers she'd put together through the years, mentioning that she must have worked on well over two dozen stories about their work and projects over the years for television, just as I had done in print.

In the last formal story I wrote on April 10 about their imminent departure, I mentioned that over 40 years time, they had helped more than 50 community groups—from the Chinese Chamber of Hawaii's Narcissus Festival, the Chinese Women's Club of Honolulu, Cherry Blossom Festival, Travel Women Hawaii—produce annual fashion shows. Their expertise will definitely be missed in the fashion community.

At any rate, even in retirement, the two can't survive not working, so were already talking about plans to collaborate with Seattle-area schools, indigenous tribes and the Seattle Museum, as well as try their hand at farming Washington apples. I expect one day I'll be writing here about their organic cider and apple sauce!
———————
Likelike Drive-Inn is at 745 Keeaumoku St., and has been a Honolulu fixture since 1953. 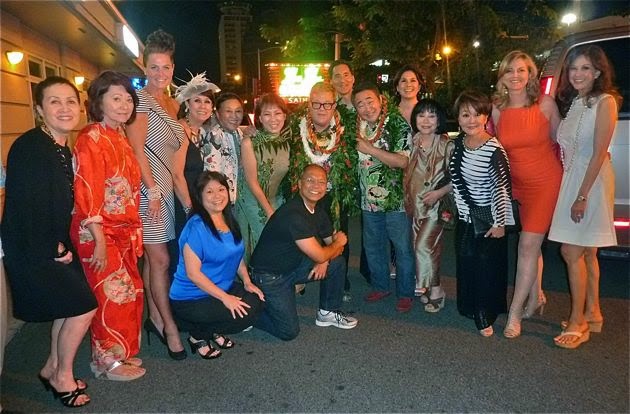 The group gathered for a last photo with the neon sign in the background. 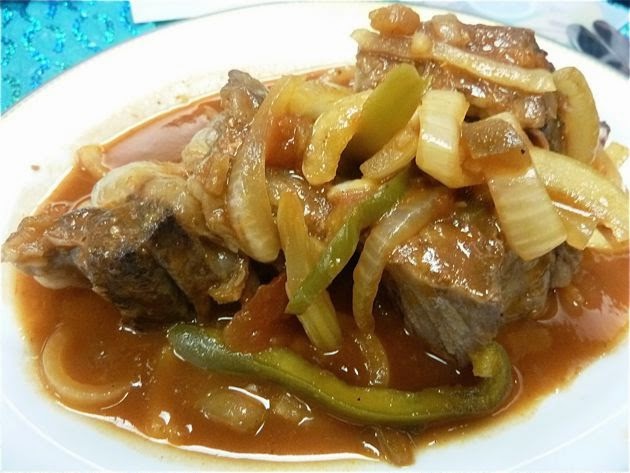 On the menu, following corn chowder and a tossed salad, was baked shortribs. 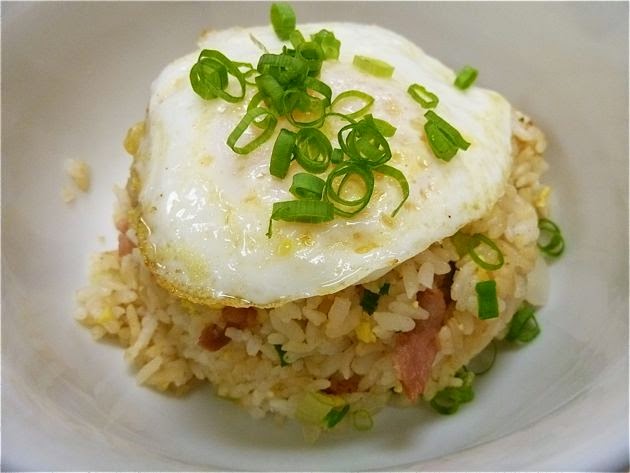 I especially enjoyed the drive-inn's fried rice topped with an over-medium egg. 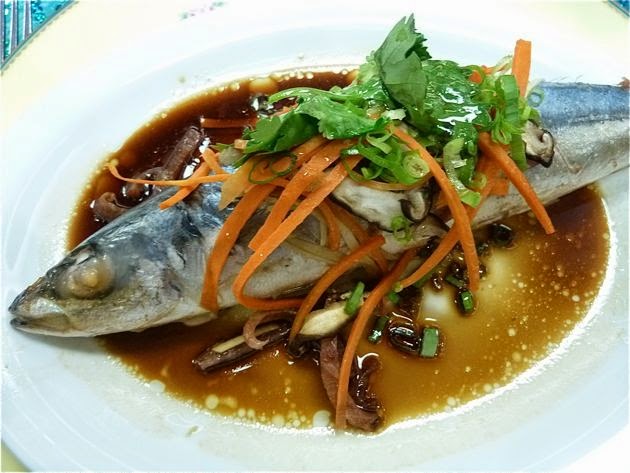 You have to be really local to enjoy whole opelu topped with soy sesame sauce, carrots, shiitake, ginger and green onions. 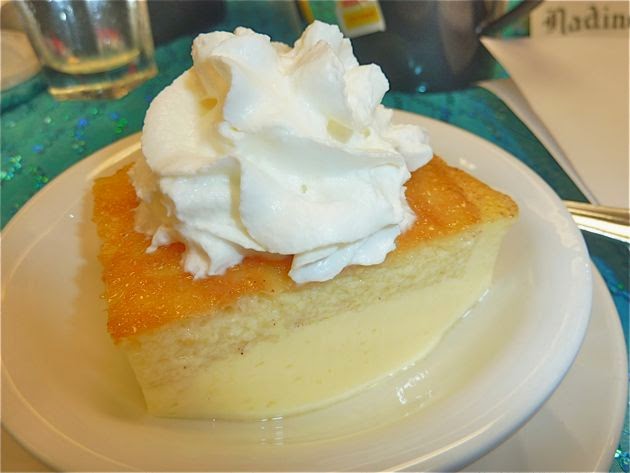 KITV’s Pamela Young scarfed down dessert of baked custard pudding so fast, the staff brought her seconds. This dessert amounts to true bliss. 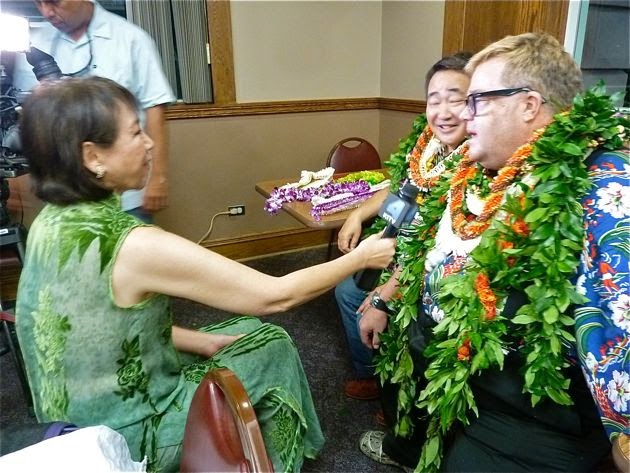 Young interviewed the design duo for a KITV broadcast. 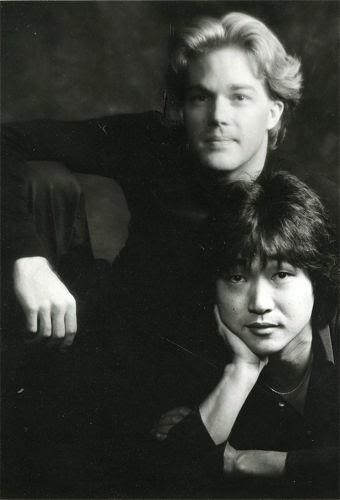 The designers met in 1970s Honolulu. Chandler grew up in Seattle but had moved to Japan. Takeo had grown up in Japan but moved to Seattle, so when they met, they had a lot to talk about. 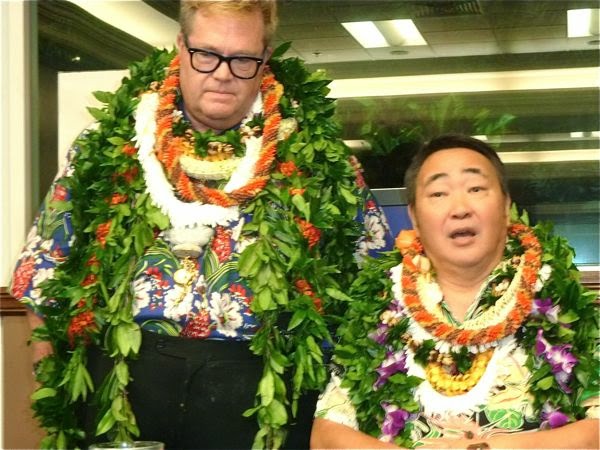 The designers thanked their friends for decades of support, with an invite to visit them in Buckley, Wash.
———
Nadine Kam is Style Editor and staff restaurant critic at the Honolulu Star-Advertiser; her coverage in print on Wednesdays and Thursdays. Contact her via email at nkam@staradvertiser.com and follow her on Twitter, Instagram and Rebel Mouse.
Posted by Nadine Kam at 7:13 PM