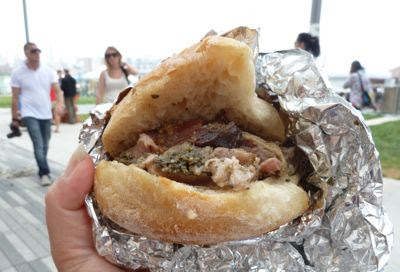 On May 27, returned for a quick tour of Brooklyn Flea & Smorgasburg that takes place Saturdays and Sundays at the East River Waterfront in Williamsburg, at 27 N. 6th St.

I came to New York for a couple days with a specific agenda that included seeing the Prada-Schiaparelli:Impossible Conversations exhibition at the Metropolitan Museum Costume Institute, returning for Luke's Lobster roll, visiting Momofuku Ssäm Bar, checking out the sales at Century 21 and possibly checking out Jean-Georges Vongerichten's ABC Kitchen in the unlikely site of ABC Carpet and Home. I peeked in at the latter, and was hoping to find Luke's Lobster at Smorgasburg, but alas, the food truck wasn't there.

What was there was porchetta that I had the last time I was there, as well as Japanese and Korean tacos, sausage sandwiches and a lot of heavy, fatty food, too much so for a hot day. Yet, the porchetta sandwiches aren't so big, at about baseball size, so I ended up getting another one. Along with watermelon lemonade, and something new, deep-fried anchovies from Bon Chovie. Now those were awesome! You can get them with heads on or off, and being sometimes squeamish, I decided to go with the headless option. 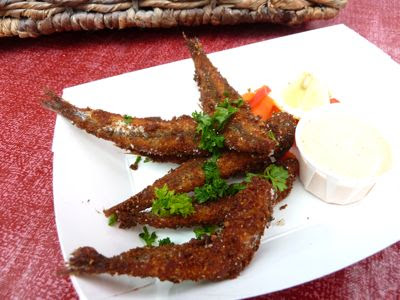 These Bon Chovies were crisp and delicious! 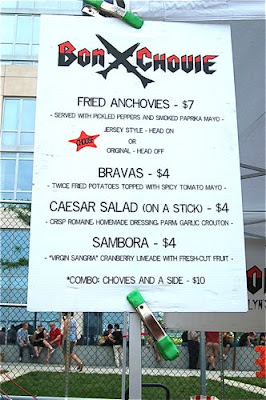 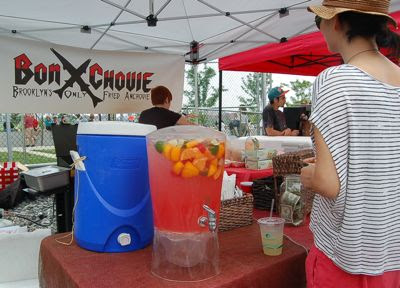