Hard Rock asks you to pick next Legendary Burger 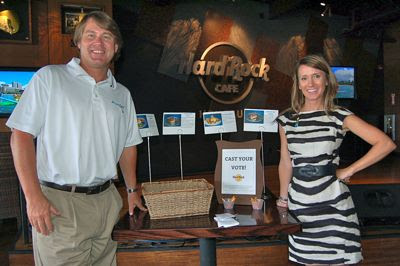 Nadine Kam photos
Mark Marble, AccesSurf President and CEO and Heidi Putnam, Hard Rock Cafe sales manager, are encouraging people to vote on Facebook for the burger they want added to the cafe's Legendary Burger menu. Tuesday is the deadline to "Like" one of the four entries.

Yesterday marked the launch of Hard Rock Cafe Honolulu's charity burger promotion that gives burger fans a say as to which new burger—all starting with a 10-ounce Certified Angus Beef patty—will be added to the local cafe’s Legendary Burger menu.

Burger lovers can visit Hard Rock's Facebook fan page at www.facebook.com/hardrockcafehonolulu to "Like" their favorite. The burger with the most “likes” will be added to the Hard Rock Cafe Honolulu menu on June 23, 2012, at the yearly AccesSurf fundraiser and will be featured on the menu for one year.

A dollar of every winning burger sold will benefit AccesSurf, an Oahu-based, non-profit organization dedicated to empowering the physically challenged and wounded veterans to enjoy the ocean through adaptive surf instruction and water recreational programs.

AccesSurf was started by Mark Marble, a therapeutic recreation specialist who saw the need for such a family-oriented program while working at Shriners Hospital for Children.

He said he'd worked with Hard Rock on smaller projects before, and the restaurant's move to its new location at 280 Beachwalk Ave., provided a good reason to team up again on a fundraiser to benefit families. 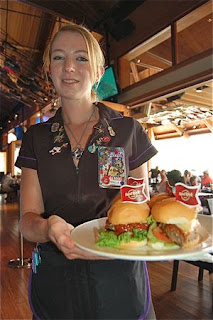 Malia Andrews delivers the Hawaiian Pizza Burgers, one of four vying to be the next Hard Rock Cafe Legendary Burger.

During a media preview yesterday, we had a chance to meet the candidates. I don't want to influence the vote or anything, but the two favorites among the media group and AccesSurf members, family and friends, were the Spicy Mango Burger and the Loco Moco Burger.

There's nothing NOT to like about a juicy loco moco burger with the added flourish of Portuguese sausage. I liked the originality and novelty of the Spicy Mango Burger topped with banana pepper slices, mango cream cheese and jerk mayo, but it's one the average eater may not appreciate. I also thought it could have been more mango-ey, but considered it may be difficult to get good mangos throughout the year, so in the end I cast my vote for the more obvious, democratic Loco Moco Burger. 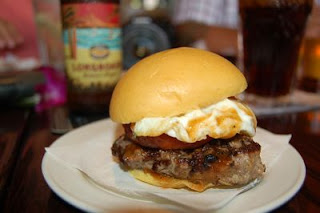 Loco Moco Burger: The 10-ounce Certified Angus Beef patty is topped with Portuguese sausage, a fried egg over easy and brown gravy. This was the crowd pleaser. You won't be able to keep your hands clean with this one. Note that all these photos reflect half size tasting portions, not what the full burgers will be. 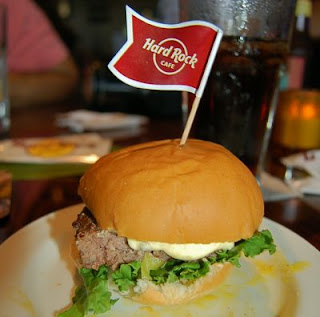 Spicy Mango Burger: I loved the concept of this burger topped with rings of banana peppers, mango cream cheese sauce and jerk mayo, for its creative combination of spice and sweetness. I think it could be more of a contender if the cream cheese were replaced by a mango chutney. The only problem is that while 50 percent of diners will be able to take the heat of the peppers, restaurateurs need to consider the other 50 percent who are wimps. 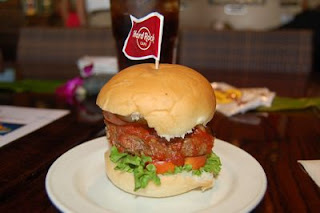 Hawaiian Pizza Burger: This burger is supposed to be topped with sliced ham, mozzarella, pineapple, tomato and marinara sauce. When I tasted it, it wasn't even in the running. But now that I'm reading the list of ingredients, I realize whoever was in the kitchen forgot to put in the ham and cheese. That might have made all the difference. The marinara needed more herbs to taste more like pizza sauce. It was rather bland. 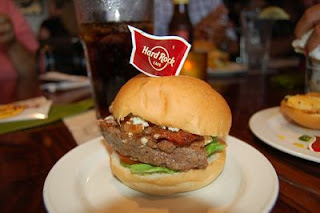 Hawaiian BBQ Burger: Ah yes, bacon makes everything better, and it sure worked here with a caramelized onion BBQ sauce and blue cheese crumbles. It's right up there with the Loco Moco Burger, but you could get a bacon burger anywhere. 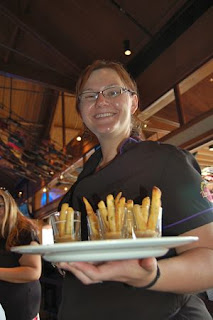 Amanda Kiecker arrives with the fries. 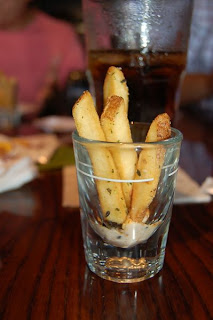 I loved the seasoned fries with spicy aioli, so it's a good thing they were serving small portions. Otherwise, I wouldn't have been able to get to all the burgers. 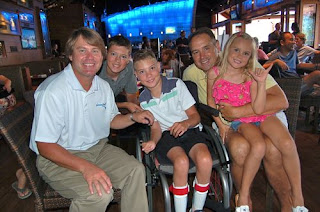 AccesSurf President and CEO Mark Marble, left with one of the families participating in the organization's programs, including instruction in adaptive surfing, standup paddling, sea kayaking and swimming. From left are Nathan, Brendan, Hobie and Ashlyn Anderson. 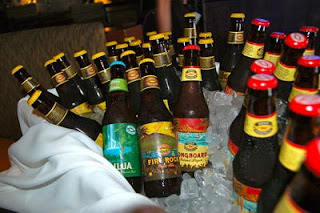 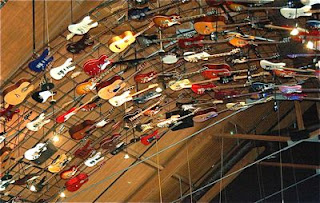 We were parked under a ceiling of guitars.