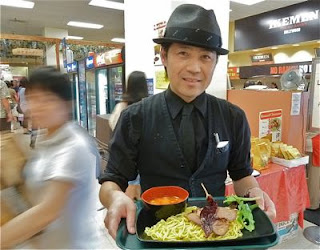 Nadine Kam photos
Ikemen CEO Max Kawabata with his Back Draft dip-style (tsukemen) ramen, $11 at Shirokiya's Yataimura through July 4. Chewy Sun noodles are served with char siu pork and tonkatsu broth stirred with green onions and ground beef chili paste. The close up is below.

Max Kawabata already has six restaurants in Japan, with cuisines ranging from izakaya fare to barbecue.

It would have made sense to repeat one of his successes when he made his move to Los Angeles, but why go the easy route? Not one to repeat himself, his Hollywood debut came via ramen, and Lady Gaga, among other celebs, is a fan.

You can check it out firsthand during the two weeks Ikemen has set up shop at Shirokiya's Yataimura.

Although Ikemen offers the soup ramen most familiar here, its specialty is tsukemen, or dip-style ramen, in which the noodles are served at room temperature and dipped into a warm Ikemen pork broth. 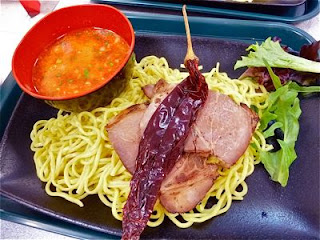 The tonkatsu au jus, as it's called, is then enhanced with other ingredients in variations of the basic ramen. Inspired by the change of address—right at 1655 N. La Brea and Hollywood Boulevard—names of dishes are inspired by Hollywood. These would include the Johnny Dip (a basil-enhanced, pesto-style broth), the fiery Back Draft, and most amusing, the Ghost Buster, a cream of mushroom broth with a marshmallow reduced in flames and stirred into the broth on the spot in an homage to "Ghostbusters" Stay Puft Marshmallow Man!

Bring your friends so you can try the various broth selections. They were all good, I finished every last noodle, which is amazing considering I've never been able to finish a bowl of ramen anywhere else. I'm hoping they pick up so many fans here that they'll have to open an Ikemen outpost here, though with Kawabata at the helm, it may morph into some other restaurant entirely!

The stylish Ikemen team will be at the Yataimura through July4. 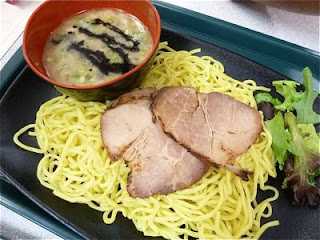 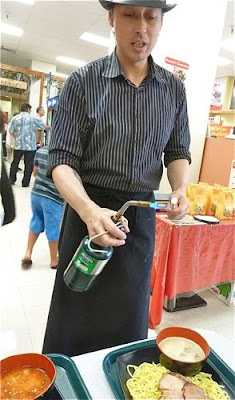 Jimmie Heabea, a k a Jimmie Heaven, torches the marshmallow that gets stirred into the Ghost Buster ramen ($12) in front of him.

Who you gonna call?: The Stay Puft Marshmallow Man goes from benign to evil in "Ghostbusters." 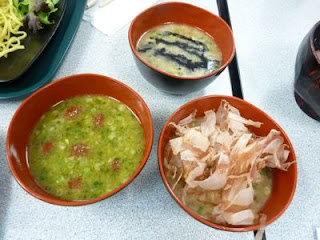 Dipping broth options, from left, are the Johnny Dip (pesto), Zebra and basic Ikemen dip of tonkatsu au jus with green onions and loaded with fresh-shaved bonito, made from the stacked fish below. A side order bowl of Adachi bonito flakes is $3. 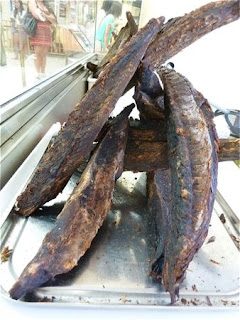 Ikemen general manager Takashi Adachi prepares, smokes, ferments and dries the fish through a process passed down through his family for more than 200 years. Before serving, the fish is passed through a katusobushi machine, reducing it to fine shavings.
Posted by Nadine Kam at 7:09 PM