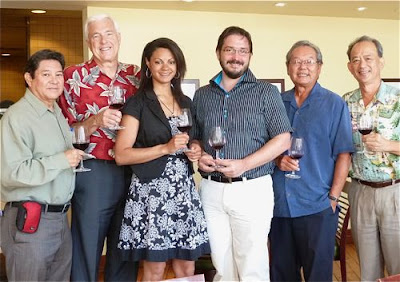 It was a treat to run away from the office at midday June 26 for a gathering of wine lovers to introduce a boutique line of Aloha Wines, a collaboration between oenophiles Randy Kuba and Dr. Glenn Miyataki and Château Aiguilloux from the Languedoc region of Southern France.

The gathering at Alan Wong's Pineapple Room was hosted by Dr. Miyataki and Robin Campaniano, with the Anne Lemarié, second-generation winemaker from Château Aiguilloux in town to present their Aloha-branded Rose 2011, Tradition 2010, Les 3 Seigneurs 2010, and Anne-Georges 2009.

The project has been six years in the making, starting when Dr. Miyataki, then president of JAIMS (Japan-America Institute of Management Science) was teaching a class in management in China. Anne was one of his students and asked if she could interview him for a project she was working on. He learned of her wine roots and before you know it, he was in France, staying with her parents, who purchased Château Aiguilloux in 1982.

Wine was then a new endeavor for François and Marthe Lemarié. He had been working as an engineer in Africa and she was a teacher on the Ivory Coast when they met. They started small, with the philosophy of sustainability and conviviality maintained to this day.

During the lunch, Anne told me they never approached winemaking as a vast commercial endeavor. "It was always about sharing, to sit down with friends and nice food."

She said that when she started talking to Glenn, she learned about the similar Hawaiian values of hospitality and aloha. "He talked about welcoming people, opening doors and enjoying food together, and we started thinking about how we could bring these ideas together."

With the wine part taken care of, here in Hawaii, Kuba and Miyataki have launched the Aloha Wine Club to work with winemakers who put heart and soul into their endeavors, and share their wines and spirit of aloha and giving with local wine aficionados, many of whom happen to be movers and shakers in the community.

Kuba said, "Our mission is to learn about wine and how it pairs with food because it brings us together, spreads the concept of aloha within our businesses and extends to the world."

Bottles of the Château Aiguilloux wines will be available to members for now, but in time, they hope to make them available to the larger wine community. Visit www.AlohaExcellence.com to join. 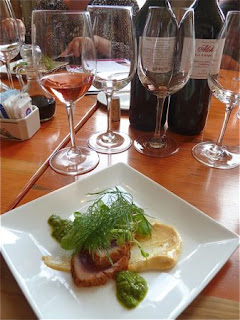 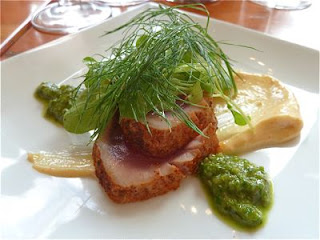 It was noted that roses are not particularly popular in Hawaii, but I find it perfect for summer. In France, Anne said, they are a popular with fish, salads and fruit. 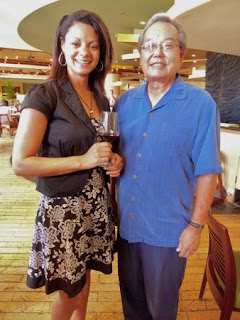 Student and teacher, Anna Lemarié and Dr. Glenn Miyataki, are now working together to promote the spirit of aloha and conviviality. 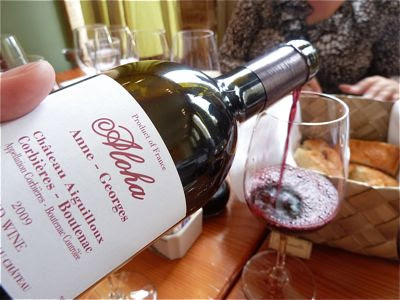 Anne-Georges is the wine named after Anne and her brother by their parents. It's a Concours des Grands Vins de France Macon 2012 gold medal winner comprising 50 percent carignan from 60-year-old vines, 30 percent syrah from 25-year-old vines and 20 percent grenache from 18-year-old vines. It is aged two years in new oak barrels. Described as having the rich hues of cherries and plum; nose of dark fruit, currants and blackberries; hints of black olives, vanilla and licorice with a touch of black pepper; plus soft velvety finish, I enjoyed this best with the shortribs below. 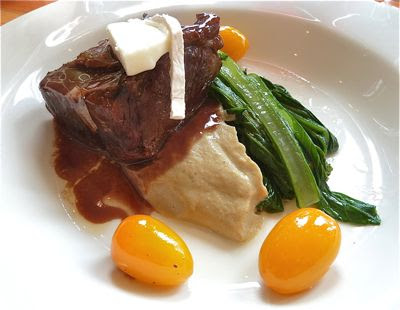 The other two reds were paired with braised shortribs and baba ganoush were the Aloha Tradition 2010 and Aloha Les 3 Signeurs 2010. The Tradition is made in the traditional method of vat aging with no wood. My favorite drinking wine was the Les 3 Seigneurs, "Wine of Three Kingdoms," with 65 percent carignan, 25 percent grenache and 10 percent syrah, aged in third-generation oak barrels to give it a smoky nose to balance its bright cherry and berry flavors. It is a Concours des Féminalses de Lyon 2012 silver medal winner and Concours des Grands Vins de Corbières 2012 bronze medal winner. 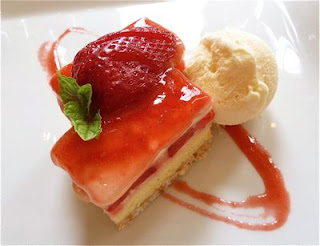