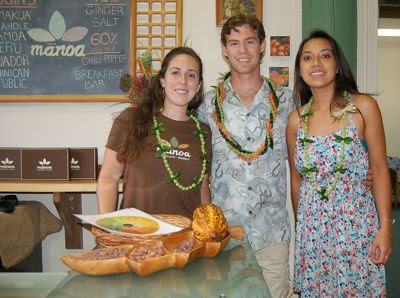 Manoa Chocolate Hawaii hosted the grand opening of its Kailua factory on June 16, from afternoon through evening, with no shortage of chocolate aficionados clamoring for a taste of its 60 to 72 percent premium chocolate bars.

Founder Dylan Butterbaugh became fascinated with the process of making chocolate in small batches with friends about two years ago, and after much trial and error and invention, created his boutique chocolate with aims of raising Hawaii's profile as a producer of upscale chocolate.

The operation is as green as can be, with people power going into the winnowing process that separates the husks from nibs of the roasted cacao beans. Now that it's summer, Dylan is something of a Tom Sawyer or Pied Piper for friends of his younger brother Carson, who are gladly putting their muscles to work grinding the nibs and pedaling the Dora the Explorer tricycle that powers the winnower. Their reward is a taste of the remnants of the chocolate tempering process.

I got a chance to try my hand at grinding, and it was interesting to note the vast difference in flavor of the nibs and the first pass at the freshly ground chocolate, which was sour, fruity and bitter. The grinding releases the cocoa liquor, a complex combination of more than 300 chemical compounds that give a particular region's chocolate its particular flavor profile. This is the essence of the cacao and Manoa Chocolate celebrates the differences by importing beans from all over the world, producing single-origin chocolate bars for our side-by-side comparisons.

In store that day were chocolate bars made with cacao beans from Samoa, the Dominican Republic, Ecuador and Peru. Hawaii regions currently being represented are Waiahole and Hamakua, and Dylan has high hopes that with his operation, more growers will be inspired to plant cacao trees and contribute to a viable industry in the islands. He has access to an acre on the dry side of Waimanalo that he intends to plant with cacao.

Nothing could be sexier than the combination of Hawaii and chocolate, he said, and I agree!
——————
Manoa Chocolate Hawaii is on the second floor at 315 Uluniu St., in Kailua, above Cinnamon's restaurant. Call 343-3040. 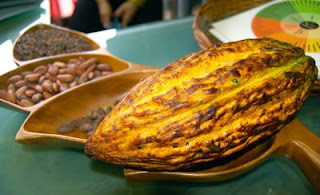 On display: A cacao pod and cacao beans in various stages of production. 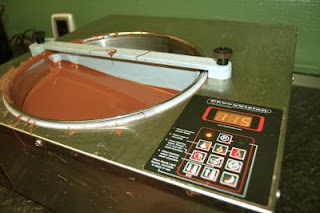 The chocolate is conched and tempered before it can be molded into chocolate bars. 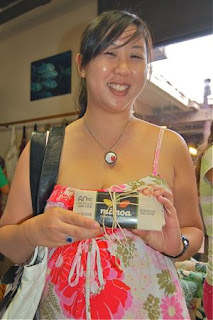 Lisa-Marie Tam was among the first customers of the day. Her chocolate necklace pegged her as an aficionado. 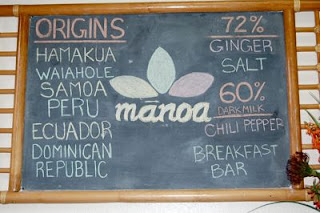 A chalkboard showed the origins of chocolate available that day.
Posted by Nadine Kam at 3:49 PM