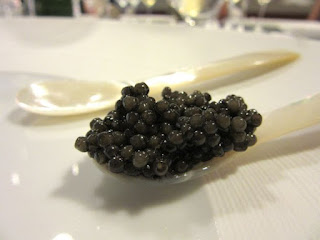 Nadine Kam photos
Sturia Primeur caviar was one of four styles of caviar served during the “Champagne & Caviar” event at Halekulani as part of the Hawai’i Food & Wine Festival.

After opening stints on Hawaii Island and Maui, the Hawai’i Food & Wine Festival moved over to Oahu Wednesday, beginning with “Kamehameha School Presents Urban Lu’au” at SALT Kakaako, and “Caviar & Champagne” at Halekulani Hotel, an encore to last year’s “Caviar and Krug.”

This time around at Halekulani, four of the world’s most illustrious champagnes were paired with French Sturia Caviar for a most decadent and educational experience.

Sturia grew out of a 25-year-old French-based sturgeon-raising operation, and after 15 years now offers 10 types of caviar from two species of sturgeon: Acipenser baerii and acipenser gueldenstaedtii.

Most of the time, restaurants offer caviar as an embellishment for other food, so it’s rare to have a tasting like this, where all the focus is on a few types of caviar. 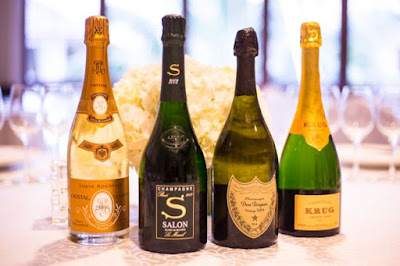 With each sampling, presented on mother-of-pearl spoons to avoid the reactive effects of a metal spoon, we were able to gauge texture of the beads, salt and iodine levels, fishiness and nuttiness of the sturgeon roe, discerning differences between each style. To me, the salty mildness of the Primeur was reminiscent of cheese. It was one of my favorites, along with the well-balanced Oscietra, a rare product considered the Rolls Royce of caviar. Sturia produces only 600 kilos, or 1,320 pounds of Osetra Grand Cru caviar a year, and only 10 kilos, or 22 pounds is allocated to the United States each year.

Because of distance and FDA and Fish and Wildlife regulations, the U.S. is new territory for the company. Most of Sturia’s caviar now goes to Russia and the Middle East, at about 1.3 tons each annually. Japan is close behind, and the China market is growing rapidly.

Those who prefer their caviar more fishy, might try the Vintage or Grand Chef styles. The Grand Chef is the most popular, with a bold saltiness. I enjoyed them all.

In addition to the 10 styles, Sturia will be offering a special Christmas caviar, refined over five weeks to be less salty, as well as another Valentine’s Day caviar.
A representative from Sturia told me that it’s customary in France for gentlemen to present their beloved with a gift of a tin of caviar for Valentine’s Day. Well of course there are aphrodisiac properties associated with caviar. Then there is the price point. A tin of Oscietra Grand Cru will set you back $400 or $500, and that may mean more to a woman than the cost of a box of chocolates!
—————
Those wishing to purchase Sturia caviar might get in touch with Gatlaine & Paul Evidenza Gastronomy & Prestige at Waterfront Plaza, 500 Ala Moana Blvd., Building 7 Suite 400. Call (808) 543-1160. 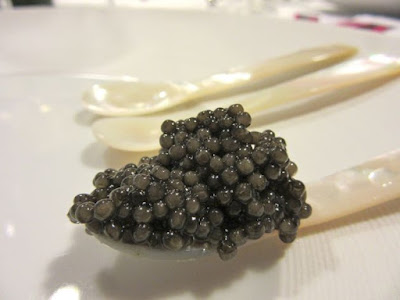 Sturia’s Osciettra or Osetra caviar had a green tinge. It is said to be a favorite of women, and I did like its delicacy very much. 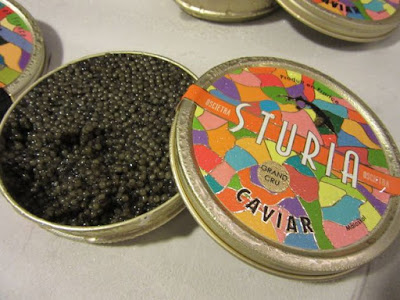 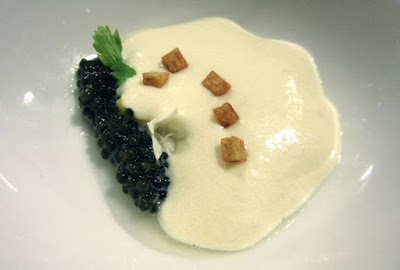 Following the solo caviar tastings, Halekulani executive chef Vikram Garg showed how the caviar might be incorporated into a dish like this puree of smoked baked potato and lemon with potato croutons. 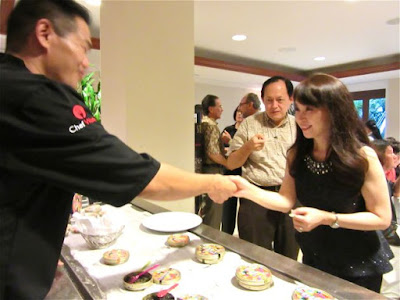 Before the event ended, people lined up for a second chance to compare selections and choose their favorites.
—————
Nadine Kam is Style Editor and staff restaurant critic at the Honolulu Star-Advertiser; her coverage is in print on Wednesdays and Thursdays. Contact her via email at nkam@staradvertiser.com and follow her on Twitter, Instagram and Rebel Mouse.
Posted by Nadine Kam at 4:37 PM