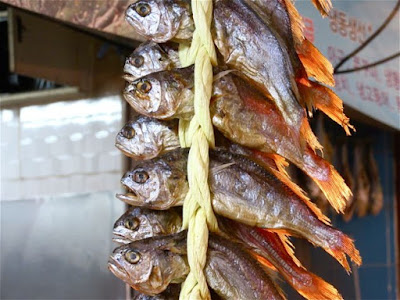 SEOUL, SOUTH KOREA — Gwangjang Market, which started in 1905, is one of the oldest and largest traditional markets in South Korea, packing in more than 5,000 shops and food stalls. You’ll feel exactly like one of the food stall sardines as you shuffle your way through crowds of 65,000 people said by Wikipedia to visit the market each day.

In addition to tourists wanting absorb the sights, sounds and smells, it’s a place where locals gather for a quick lunchtime bite or pau hana drinks and pupu while sitting shoulder to shoulder with friends and strangers alike.

It’s a great place to sample Korean street food, as hundreds of vendors cook up tteokbokki or toppoki, blood sausage, mandoo, roast pork and chili crab. The market is best known for its bindaetteok, sizzling griddle pancakes made with mung bean batter, meat and vegetables. On a hot day, the mix of greasy air and overcrowding can be overwhelming, and I happened to be visiting in the middle of summer, but these are said to be a treat on a rainy or cold winter’s day. 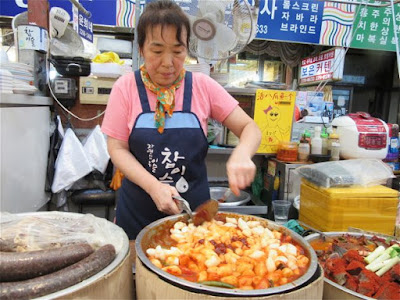 Stirring the rice cake tteokbokki, simplified in the west as toppoki.

If you tire of the food and the crowds, head upstairs which is home to a fabric mart and home goods shops. There, tailors are waiting to create garments for you, including the traditional Korean hanbok; the most beautiful run about $400. The market is a huge source of Korean bridal apparel, and a few days after visiting the market I was lucky to chance upon a wedding party at Korea House, where the Western groom and his bride were outfitted in the colorful traditional costumes.

Gwangjang Market is at 6-1 Yeji-dong, Jongno-gu, and can be reached via subway line 1 to Jongno-gu station (exit 8), or line 2 to Eujiro station. Shops are generally open 10 a.m. to 6 p.m. Mondays to Saturdays; food stalls are open daily until about 10 p.m. Hours vary by vendor.

Here are some of the market offerings: 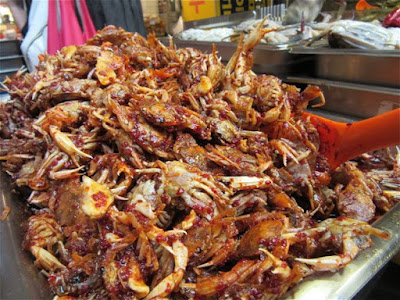 An abundance of chili crab. 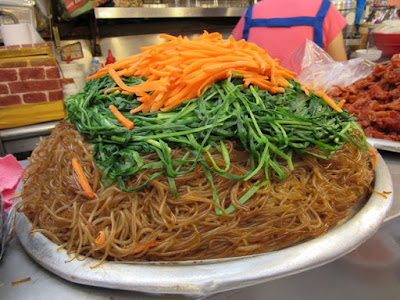 Chop chae for a crowd. 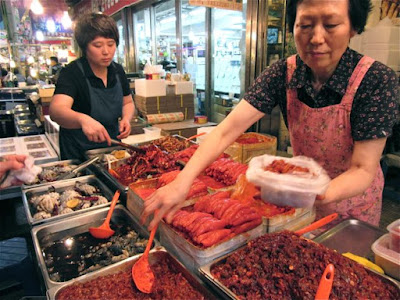 Seeing plenty of red at a stall specializing in marinated seafood. 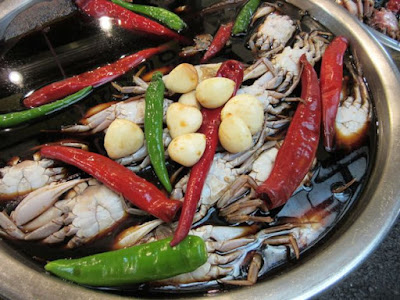 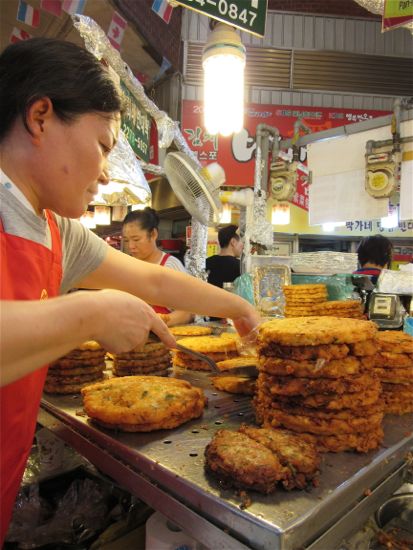 One of the market’s specialties is the mung bean pancake bindaetteok, fried up hot and crispy on the spot. 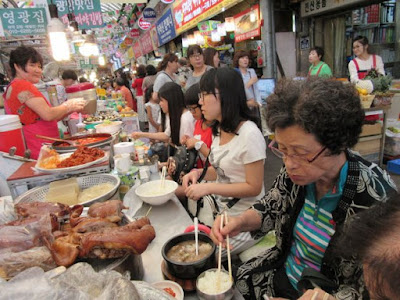 People sitting down to eat are people out of your way in the bustling, densely populated market. 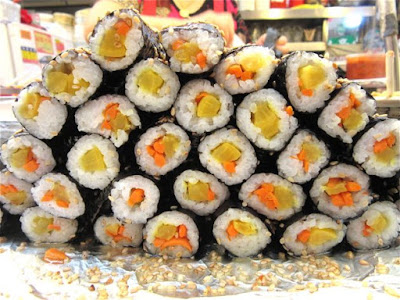 This Korean version of sushi is called mayak gimbap, meaning “drug gimbap,” because of the addictive combination of seaweed, pickled radish and carrot, rice and and sesame oil. 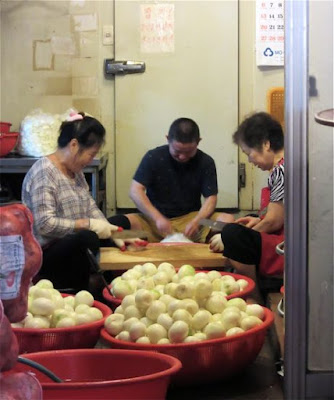 Working behind the scenes to keep the food coming, employees at one vendor stall chop onions by the basketfuls. 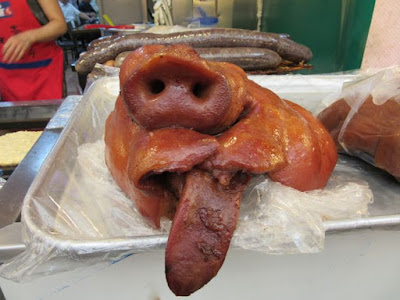 Some sights aren’t so pretty, but no more shocking than our own Chinatown. 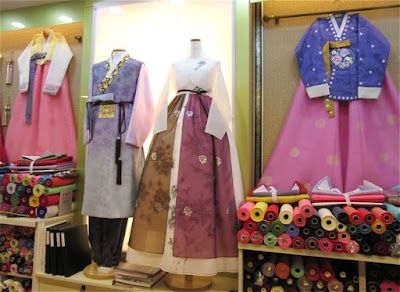 If you need respite from the crowds, head upstairs to shop for fabric or eye the beautiful traditional hanbok. 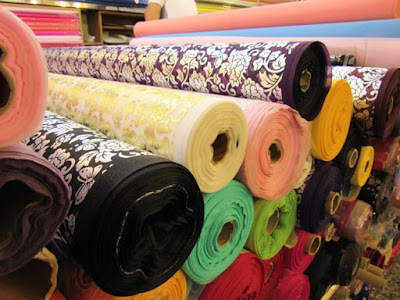 Bolts of silk.
—————
Nadine Kam is Style Editor and staff restaurant critic at the Honolulu Star-Advertiser; her coverage is in print on Wednesdays and Thursdays. Contact her via email at nkam@staradvertiser.com and follow her on Twitter, Instagram and Rebel Mouse.
Posted by Nadine Kam at 7:42 PM