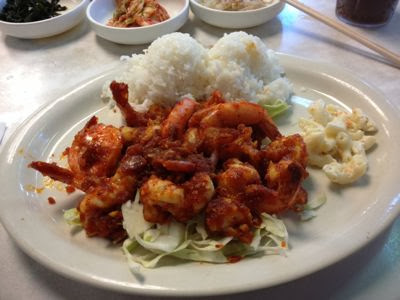 I wake up late at 10:30 and start checking my emails and texts. The phone rings and it's my mom, asking me if I want to go eat shrimp at Andy's Kahuku Shrimp with her and my sister. Very tempting, but I can't eat while detoxing, so I have to pass.

Just the night before, a friend told me she gave me credit for being out and about because she wouldn't leave her house if she couldn't eat.

I find myself going out because so many friends are in town just for the holidays. One of my friends at Anna Miller's last night was in from D.C., and tomorrow, friends from New York and Shanghai want to celebrate with a potluck brunch at Cookspace. Torture! I love brunch but won't be able to eat anything!

I do have a lot of willpower though. I've read about the Stanford Marshmallow Experiments in which children were offered a marshmallow or other treat, then told they would receive one more if they did not eat it before the researcher returned (usually 15 minutes.) Most of the kids ate the marshmallow.The ones who could display patience and willpower in anticipation of greater payoff grew up to be more successful than the others. I was the sort of kid who would have waited for that second reward.


By this point, I'm not anticipating weight loss. Because I'm not hungry on this juice cleanse, I guessed that it packs more calories than my goal of limiting my intake to 1,200 calories a day. I don't always stay within that restrictive number, but I try to stay close. The big exception is on days that I'm reviewing a restaurant.

So, I ask when I pick up my juices at Blue Tree at 11:30 a.m. and the cleanse drinks amount to about 1,500 calories a day, a lot for me, but less than recommended for most women, and half that for a man who might typically consume 3,000 calories a day.

There are other benefits besides weight loss though. I notice that with friends who occasionally juice, their skin is smoother, less ruddy and less dry. When I comment on it, they say they're back with green juicing. After just two days, I feel my skin is looking glowy and less dry too. Happy.

By the time I return home it's noon and I'm so hungry. I guzzle down "A Perfect Start"—the day's whole menu is a repeat of Day 1—with a straw.

Realization 5: I drink much faster with a straw. While at work, sipping the drinks took an hour to two hours apiece. With the straw, it disappeared in a few minutes. Ditto the much thicker "Blue Tree Blend." So, if you're guzzling down Cokes and Big Gulps with your fast food, try removing the lid and sipping and see if that slows you down.

I scheduled as little as possible over the weekend, deciding to catch up on my reading, because I didn't know how I'd feel by Day 3 and 4. If Wednesday hadn't been Christmas, I would have started then so I could finish up on Sunday. People who have done this cleanse say it started getting harder on Days 2 and 3. It hasn't been hard on my body at all. What's hard is the psychology of missing and longing for food, the heat, the warmth, the fat. A friend who did this detox earlier said she craved salt. I crave fat, as usual.

It's funny that one other benefit of the cleanse is supposed to be heightened senses, but what I sense is any presence of food. Dieters must always feel this way, and the acute awareness of food one can't have is supposedly the reason most dieters fail.

Friends want to go see "Anchorman: The Legend Continues." I wonder if I should bring the "Virgin Mary" but I don't want to go to the restroom during the film so leave it at home to finish it later, along with the almond milk. The friends have popcorn with Coke. I'm not tempted by the smell of popcorn because theater popcorn is like cardboard to me.

Usually, after a movie, we would look for somewhere to go for a snack or dessert, not because we're hungry, but just to hang out. It's 10:30 p.m., past the time one should be eating and there's no point this time because I can't eat anything. Extraneous eating avoided ... this time. But this is not typical. Once again I'm reminded that all the social eating I do on a regular basis really adds up.
Posted by Nadine Kam at 2:43 AM