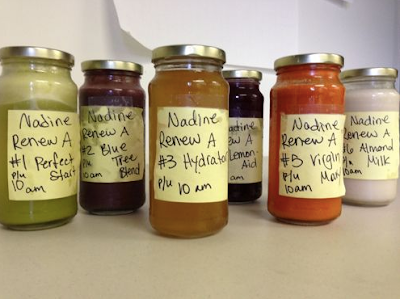 My day's "meals" on one of Blue Tree Cafe's juice detox plans are clearly marked and numbered.

2013 did not feel like a good year to me. Every high was tempered by the blow of losing my husband to lung cancer in April. Grief takes a toll on mind, body and spirit in a way in which I totally understood how, when the elderly lose a spouse, the grieving survivor often follows soon after.

I have spent many months working on mind and spirit, but still have trouble sleeping, getting only four or five hours a night. And my diet has been a steady stream of restaurants. I haven’t cooked once since he died, down from three to four times a week.

I wanted to start the new year clean, so headed to Blue Tree Cafe, where a five-day “Renew A” juice cleanse is one of handful they offer. This particular one is geared toward any newbie to detoxing. You get six smoothie/protein drinks per day, at about $40 per day. Pick them up your jars in the morning and you’re set. There is a bottle deposit you get back when you return all the bottles.

For me, the day after Christmas was the perfect time to start. It’s the slowest time of year for me, and I haven’t gone out on New Year’s Eve since I met Chris more than 20 years ago. He always said he didn’t want to risk being out on the road on “Amateur Night.” I just have to keep friends at bay with promises of going out after the new year, and in cases where there is a party or getting together with a friend moving to Korea, I’ll just not eat or bring my smoothie along.

I’ve never been on a liquid detox diet before, so don’t know how my body will respond. I think I’ll be OK because when I do drink smoothies, I feel full for hours. 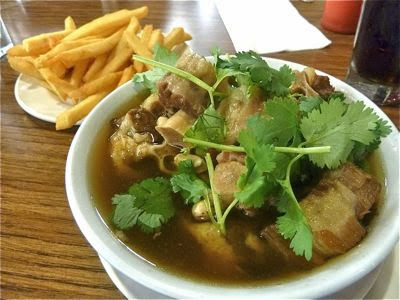 I didn’t think it was that heavy, but as happens when I have a heavy late-night meal, I woke up starving. Usually, I don’t feel hungry in the morning so don’t eat breakfast, but with my stomach already rumbling, I hoped the detox drinks would be enough.

I had called in my order on Christmas Eve. They told me they had five other pickups starting the day after Christmas and had already put in their produce order, but it would be fine if I could arrive after 9 a.m. Perfect.

When I got there this morning, the numbered bottles were already sitting in the refrigerator, ready to go and arranged nicely in a recycle bag.

First up was the light green “Perfect Start.” I didn’t have a menu, so everything would be a surprise. It was a sweet surprise, a refreshing, eye-opening blend of pineapple, cucumber, green apple and mint. So far so good. I started drinking at 10:30 a.m.

It was a work day at the paper, and at a certain point, I had to leave my desk and talk to someone about a deadline. Of course the day after Christmas, there were new boxes of candy around, and while talking to the person I mindlessly picked up a Mauna Loa milk chocolate-covered macadamia nut. I took a 1 centimeter bite of the chocolate before realizing I wasn’t supposed to eat anything outside my Blue Tree drinks.

Realization 1: It just demonstrated how much mindless eating I may be doing throughout the day. I wasn’t even hungry. I was just standing around talking, and it was there within reach. I toss the uneaten candy away.


Each drink appears to be 16 ounces and I didn’t finish my “Perfect Start” until noon, when I usually go out to lunch. It was time to start drink No. 2, “Blue Tree Blend” of acai, cherries, a vegan protein, banana, Himalayan sea salt and organic almond milk, and I wasn’t even hungry.

Realization 2: It just demonstrated the way I tend to eat by the clock, instead of by whether or not I’m hungry. I finish at 1.

As much as one is drinking on these plans, I’m told to drink lots of water as usual to move toxins along. At this point I need to take my first restroom break and it’s a good thing. When I check the mirror, drinking from the jar has left some berry stains around my lips. Note to self: Get some straws.

Usually, I would not have to go to the restroom again until 5, but at 3, just before I open up the “Hydrator,” I have to go again, then again at 4. The Hydrator looks like tea, and I fear that it might be pure kombucha, the sludgy fermented tea, which grosses me out a little. It is kombucha, though tempered with C20 coconut water that cuts through some of the vinegary pungency. There's gross looking bits of yeast floating around and I try to avoid drinking them. When I get to the bottom of the jar, they pass through my lips anyway and I don't really feel a thing. I’m OK with this.

Realization 3: On restroom breaks, I notice each time how my eyes are drawn to the various snack tables around the office, where I might typically stop to eat something once a week. I don’t know whether today’s constant scanning is daily workday occurrence or whether I’m now hyper-sensitive to what I can’t have. It doesn’t help that post-Christmas, there’s a lot more variety available.

I ask a friend who's done this cleanse before whether she had any tips for me and she said, "Drink lots of water." Usually I drink water throughout the day but struggle to get to the ideal 8 glasses. Five or 6 is a norm and so far I've had two. Three or 4 might be my limit today. Obviously, I haven't felt thirsty at all.

By the time i finish the Hydrator, it's 5:30 p.m, just about time to leave. With one more stop at the loo I'm ready to head out. I don't want to finish the last three bottles too late because i would hate to be waking up needing to go to the restroom every hour overnight.

I get home at 6 and open the Lemon-Aid, which also comprises beet juice. It's like drinking a salad.

At about 8:30 p.m. I start feeling hungry for solid food. I suddenly develop a craving for cheese. Not able to have any, I numb the impulse by passing out. I wake up at 10:35 p.m. and feel bummed. I wanted to finish the last drink at 10, but now I have two to go.

I drink No. 5, a "Virgin Mary" of tomatoes, celery, cracked pepper and salt. Very yummy. I finish at 11:30 and start blogging.

At 12:12 a.m., I'm ready for the last drink of organic housemade almond milk. I was looking forward to this all day and the protein is a treat. I'm happy with the detox so far and wonder if I'll also shed some pounds after five days. We'll see.
Posted by Nadine Kam at 2:30 AM