Sushi on rails at Genki Sushi 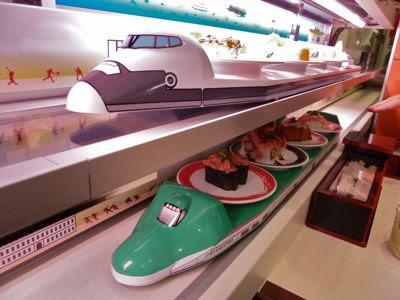 Nadine Kam photos
Sushi arrives via Space Shuttles on Bullet Trains on a magnetic track at the newly renovated Genki Sushi at Ala Moana Center, which opens to the public July 10. If it all runs well at Ala Moana, the next stop for the Genki rail will be Waikele.

Rail may be a long way off for the city of Honolulu, but it’s up and running at the newly renovated Genki Sushi, on the mall level, mauka side of Ala Moana Center.

Leave it to the Japanese to bring the latest magnetic technology to sushi delivery. (Why are we even talking old steel-on-steel rail in Honolulu when the rest of the world has gone magnetic?)

The restaurant revealed America’s first double-rail sushi delivery system to the press this morning, and will open to the public tomorrow, allowing diners to place their orders at a touch-screen panel, then have their meal arrive by Bullet Train, F-1 Race Cars, Surf Board, Space Shuttle, and more.

The system cost more than $1 million to install and it's both novel and fun. No more waiting and watching the old conveyor belts make their slow loop, and seeing someone else pick up the one dish you were ogling. I never realized how much we needed this. If you thought lines to get in here were long before, I imagine they'll be even longer as people rush in to try the new system.

If you can use an iPad and navigate your phone, you'll find the system easy to use. The pictorial screen is easy to read and use. You can opt for nigiri, sushi rolls, other items (i.e. deep-fried and cooked items) and desserts. Different pages show individual items, and you press a yellow tab to order. Plus signs add another of the same dish, and if you hit it by accident, just hit the minus button.

If you're too short to reach the touch screen, it can be detached and passed around so everyone can examine the menu and place their own orders.

Luddites, don't worry. There is still an old-fashioned conveyor line in place, so you can still grab what you want as the plates pass by.

This kind of system has been in use in Japan for three years. I think we should put a few of Japan’s engineers and restaurateurs in charge of Honolulu's rail project, and blast a few dozen our bureaucrats off via Space Shuttle where they can do no more harm.
————
Genki Sushi is open daily from 11 a.m. to 10 p.m. Call 942-9102. 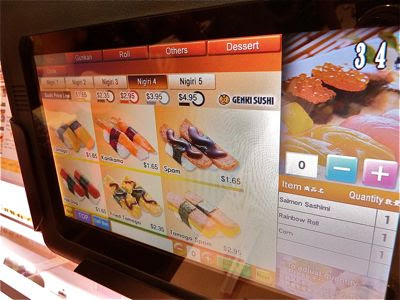 The touch screen shows your customer or table number on the top right. You can choose your items and hit the yellow button on the screen to order. The plus and minus signs are to adjust the quantity of plates. Your order is rushed to you and once you remove your plates, hit a yellow button on the rail to send your train or car back to the kitchen. 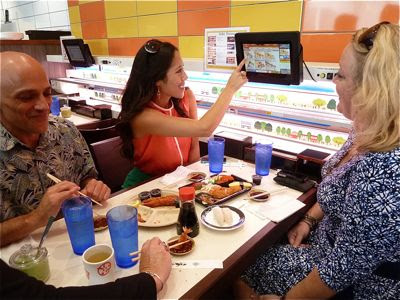 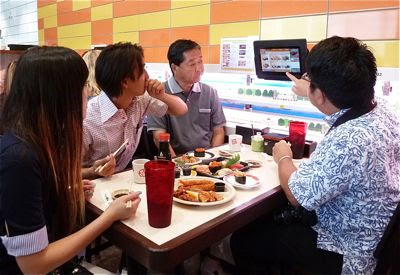 These guests debate the many options. 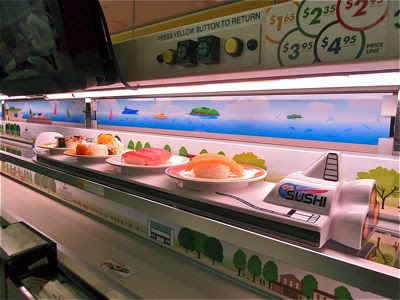 An order arrives via Space Shuttle. Each order is limited to four plates. 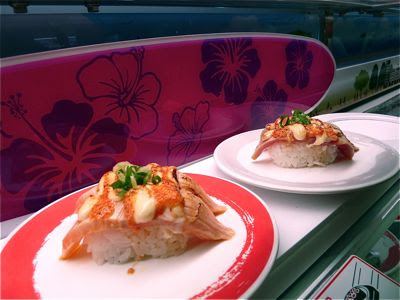 Seared salmon we ordered through the touchscreen arrived on a surfboard. 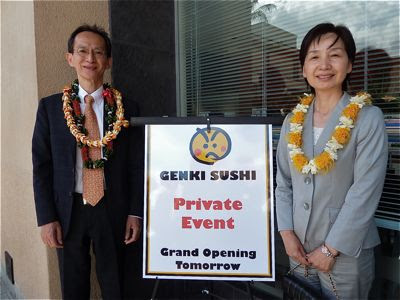 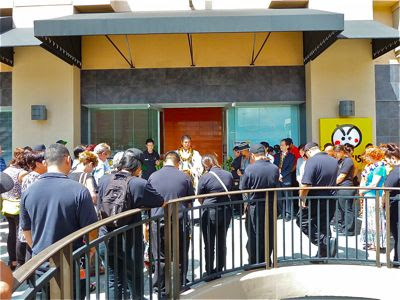 Staffers surround the restaurant's entrance for the blessing. 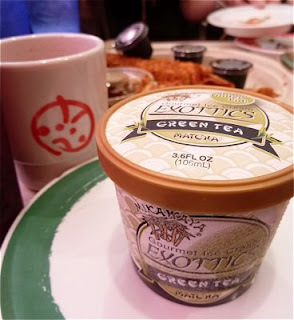 Dessert showed "sold out" on the touch screens, and were delivered the old-fashioned way, via waiter.
Posted by Nadine Kam at 5:29 PM