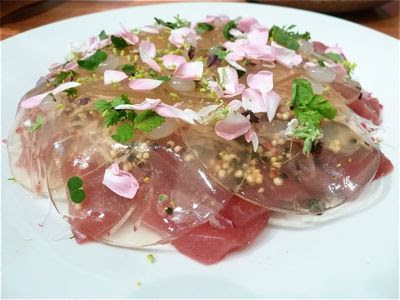 Vintage Cave Honolulu chef Chris Kajioka and Big Island farmers Pam and Kurt Hirabara of Hirabara Farms were in the house at Cookspace Hawaii July 7, as part of the new demonstration space's summer cooking series "Get Fresh LIVE," demonstrating the alchemy that takes place when chefs and farmers get together to collaborate and inspire one another.

The exciting new space is the brainchild of longtime foodie and entrepreneur Melanie Kosaka, who's able to tap into a who's who of culinary expert who offer their time and talent to opening up meaningful discussions of food and food production, beyond the glut of superficial "look where I'm eating" social media postings. 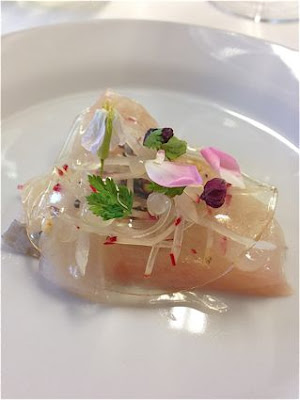 The appetizer dish, as at top, plated for individual diners, with kanpachi sashimi.

During the event, mixing cooking demonstrations, talk, tasting and dining, Kurt related that his attitude toward farming changed when he heard chef Alain Ducasse's belief that, "The chef is not the star, the produce is."

From that moment, Hirabara said he realized he had to step up his game, while saying that as a chef, Kajioka feels it's his job not to screw it up.

Pam said they could have planted their fields with tomatoes, but in choosing to work with a select group of chefs, have been willing to accommodate their requests and experiment with different crops, that sometimes works and sometimes doesn't, whether due to climate, soil conditions or the kinds of pests that they attract or repel.

The farmers admit to being a little stumped when Chris requested a conehead cabbage. Kurt said his response was, "You gotta be kidding me. Why grow the lowliest of vegetables, that we toss with kalua pig" because it's so down to earth?

Chris's rationale: "If cabbage isn't good when it goes in the pan, I can't do anything about it." 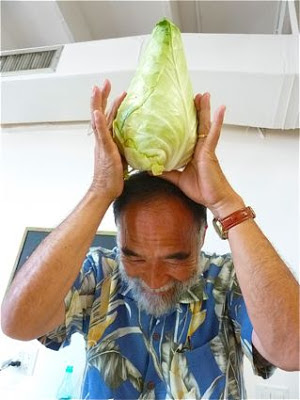 Kurt Hirabara of Hirabara Farms plays around with the Caraflex, or "conehead" cabbage that was the produce star of the evening. 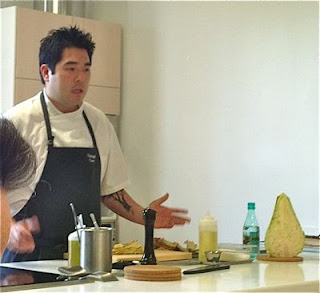 As for serving up the humble ingredient in his high-end restaurant, my view is that anyone can slap meat on a plate and make it savory, but it takes skill to make vegetables sublime. So few in Hawaii are able to do this. The handful of times I have been at Vintage Cave, the cabbage dish has been my favorite.

What Kurt found in growing the Caraflex cabbage Chris sought, is that it contains less sulfur than other cruciferous vegetables, and it's leaves are more tender and sweeter than other cabbages.

Now, he grows the cabbage exclusively for Chris, meaning you and I can't buy it at the market, and competing chefs can't get it either. That doesn't mean he's above withholding some for his own cooking experiments, and when Chris found out, Kurt said he exclaimed, "You mean you're using MY cabbage?"

Of course, true to Chris's description, the cabbage is pointy, and Pam said that when their workers first saw them, they were horrified. "They thought they had done something wrong."

As for growing great vegetables in your little patch of urban Honolulu, good luck. The farmers said they've found the same rule for growing great wine grapes applies. Greens I grow in sunny Liliha tend to be bitter, and they said the greater the differential between day and night temperatures, the sweeter greens turn out to be, also developing a beautiful glossy sheen.

"The sad thing is, a lot of greens grow anywhere so people are fooled into thinking if it's growing, it must be OK," Pam said.

The next "Get Fresh" event takes place 6 to 8 p.m. July 27, with chef Colin Hazama, senior executive sous chef of the Sheraton Waikiki, and Lesley Hill of Waialea Agricultural Group. They will be showcasing Big Island kampachi, hearts of palm and spices. Cost: $85. 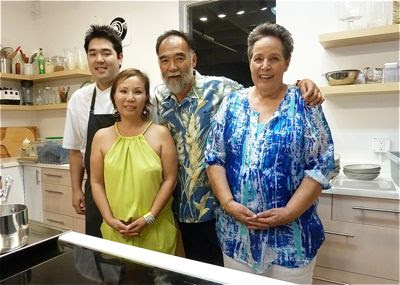 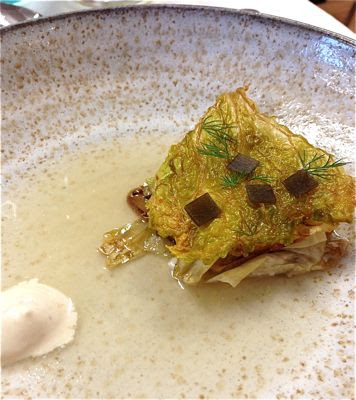 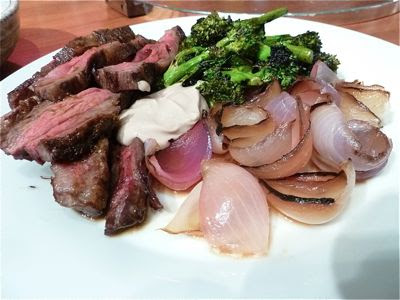 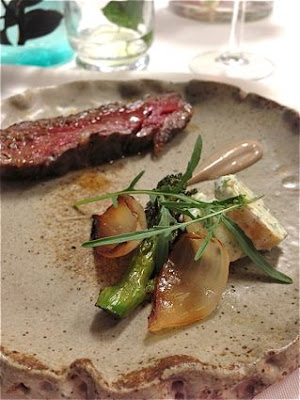 The beef cap plated for individual diners on ceramic ware created by local ceramist Daven Hee. Also on the plate are slices of Hirabara Farms potatoes. 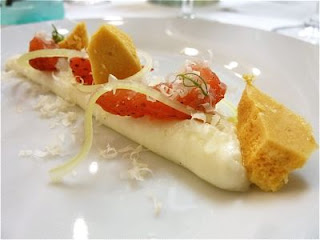 July 11
Raw and Wild Hawaii Seafood: In this hands-on class you'll learn proper technique for preparing a wild and raw experience of poke, sashimi and ceviche, 11 a.m. to 1 p.m. Cost: $65.

Gluten Free Bread and Pasta: Gluten free doesn’t mean giving up baguette, sliced breads and pasta. This class will compare gluten-free yeast bread mixes to one made from scratch to evaluate cost, time and taste; 6 to 8 p.m. Cost: $50.

July 24
Chef's Table with Roger Dikon: Celebrate the rich bounty of Hawaii with one of Hawaii’s original Hawaii Regional Cuisine chefs, who will prepare a farm-fresh lunch. Part of the Master Chefs series, 11 a.m. to 1 p.m. Cost: $65.

Aug. 10
Get Fresh LIVE with Lance Kosaka and Chris Sy of BREADSHOP: Get a sneak peak of what chef Lance Kosaka (yes, Melanie's bro) is cooking up for Skybar Waikiki—coming next spring—and why he's crazy for Sy's bread; 6 to 8 p.m. Cost: $85.

Aug. 23
Get Fresh LIVE finale with Wade Ueoka and Ho Farms: Another sneak peak of chef Ueoka's new restaurant, coming this fall, with ingredients from Shin Ho of Ho Farms; 6 to 8 p.m. Cost: $85. 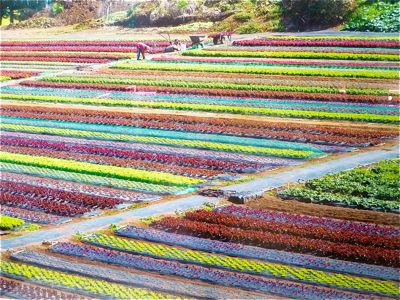 The Hirabaras brought a photo of their Waimea farmland, with a mix of greens creating a painterly landscape. 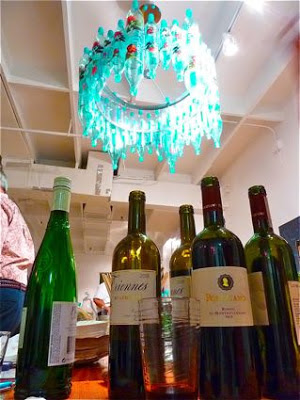 The Liquor Collection provided the wines accompanying each dish, and Hawaiian Springs water is sponsoring the "Get Fresh LIVE" series. The empty water bottles form the upcycled chandelier gracing Cookspace.
Posted by Nadine Kam at 8:32 PM