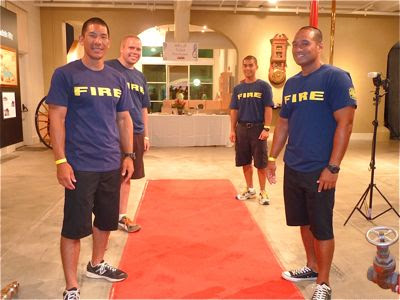 A number of Honolulu's top chefs served up food worthy of real men, and the firefighters themselves showed off their vaunted cooking skills by serving up a couple of firehouse specialties, a slow-cooked Beef Mélange with carrots, celery and potatoes covered with vine-ripened tomato purée, and kiawe-infused smoked pork with onions. Double yum! I was told these were recipes from fire chief Kenneth Silva.

Before entering the food tents, guests were able to bid on a silent auction, with such prizes as hotel stays, golf sessions, and paddleboards.

Funds raised from the event will benefit HFF's mission to promote, educate and support public safety. This includes installing more than 1,500 smoke alarms free of charge in senior citizen homes throughout Oahu.

Funds raised will also help support programs that enhance the HFD’s historic preservation, and provide recognition and charitable assistance to individuals who have dedicated their lives to the HFD.

People wondered why I was dressed for early Halloween in a black ribcage dress. I had a quick sampling before heading off to the Miss Vamp pageant at Hawaii Theatre. 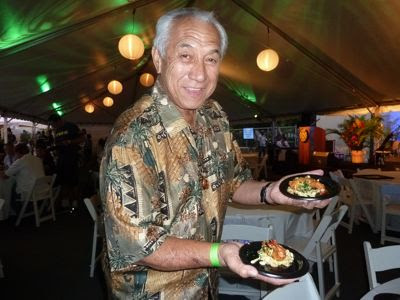 Danny Kaleikini with Farrington High's Aloha Learning Center and Job Corps Hawaii's deep-fried shrimp on risotto, below. I could have eaten two of these myself! Of course I'm not suggesting he ate both of these. One was for a tablemate. 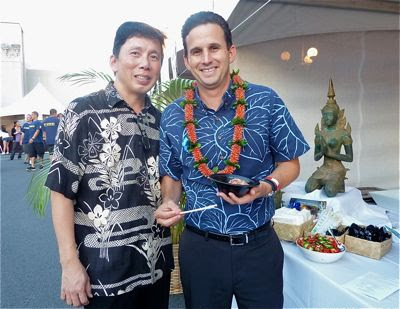 Chai Chaowasaree, left, with Lt. Gov. Brian Schatz, served spicy oxtail soup with bihon noodles, below, one of the dishes that will be on his menu when he opens his new restaurant, Chef Chai Pacifica, tentatively set for early 2013. 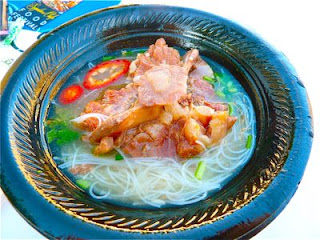 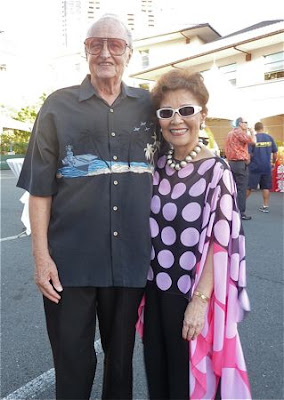 Ed and Leilani Keough. Ed liked Chai's oxtail soup so much he had three bowlfuls before they sat down to dinner, while waiting for their other tablemates to arrive. 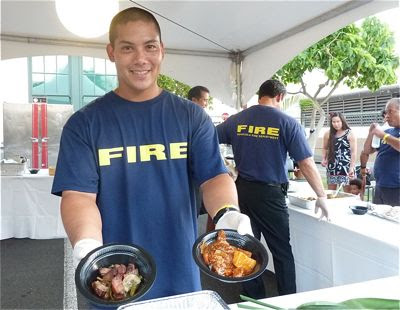 Tyler Perkins was among the firefighters helping to serve up firehouse chow, including a slow-cooked beef stew and fabulous kiawe-infused smoked pork with onions. 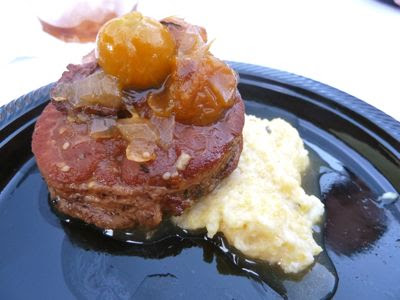 12th Avenue Grill and SALT Kitchen offered up this Big Island cinnamon-braised petite osso bucco with smoked polenta, Big Island chevre and poha berry-kula onion jam. Before biting into the poha berry, I had just glanced it and assumed it was a yellow tomato, so the sweetness was a pleasant surprise. They also served bacon-wrapped meatloaf with potato puree and house ketchup. 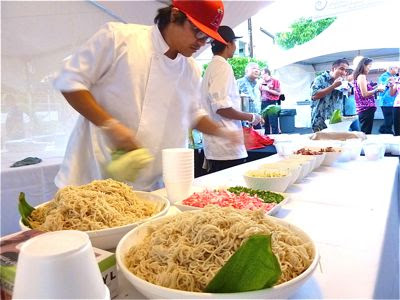 Poke Stop offered the clever option of a build-your-own saimin bowl with house-smoked shrimp and char siu pork belly and fixings, in a choice of smoked ham hock or spicy kim chee broth. 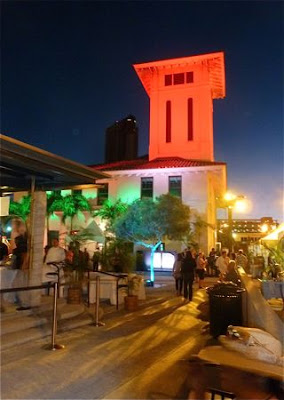 The station glowed. This time of year I always remember how, for the paper, some fellow staffers and I once tried to sleep over in the allegedly haunted old fire station. We were too scared to last the night. In addition to otherworldly scares, there was the real danger of falling through termite ridden or dry rot floors and beams. 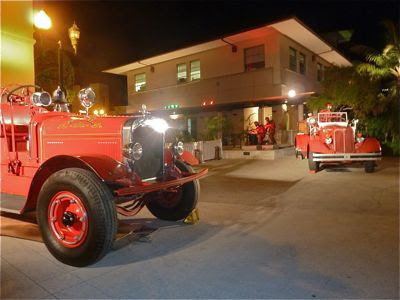 Vintage fire trucks were brought out for display. 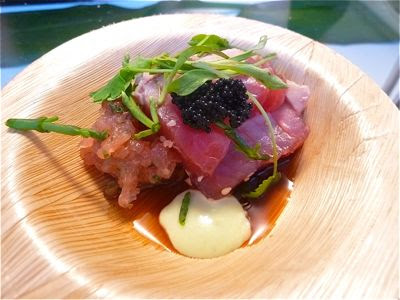 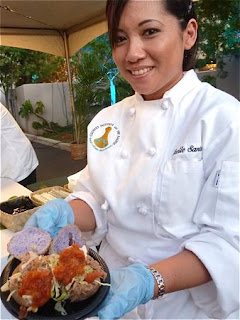 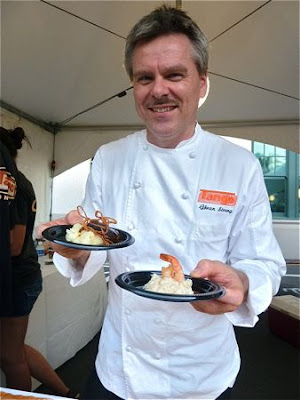 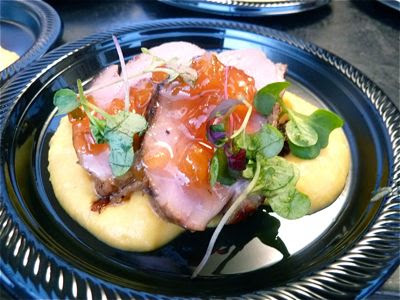 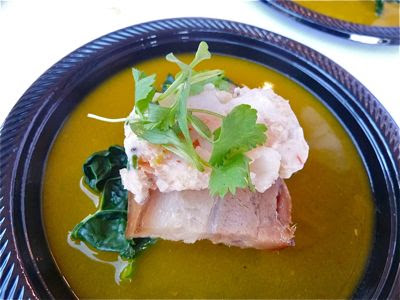 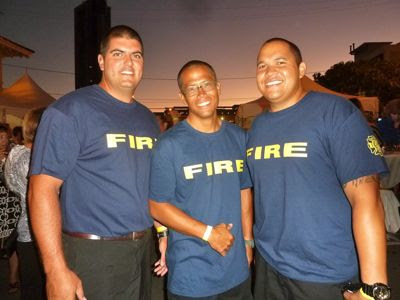 Jeff Henton, Carlin Jones and Kaulana Kama were among the dozens of firefighters standing by to serve guests during the event. 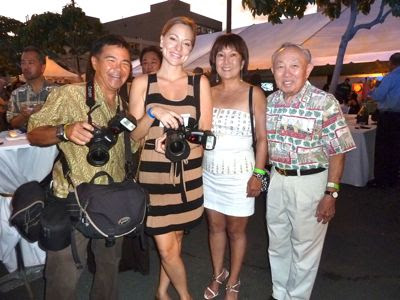 The photographers rarely get photographed. At left, my former Star-Bulletin colleague Ken Ige, who left the paper to fulfill his dream of becoming a firefighter, and Oahu Publications' Leah Friel, with guests Donna Walden and Dr. Lawrence Tseu. 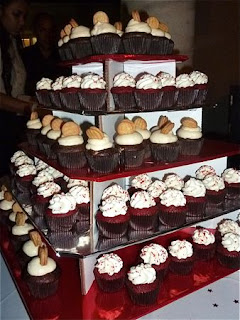 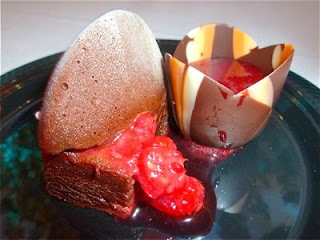 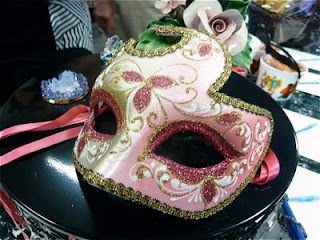 Items up for grabs during the silent auction included this mask, just in time for Halloween, and paddleboards. 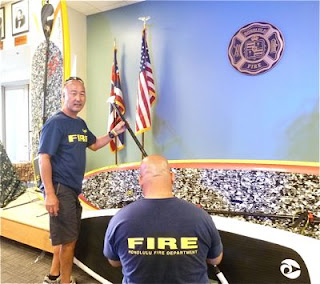