Rice Fest has a new champ 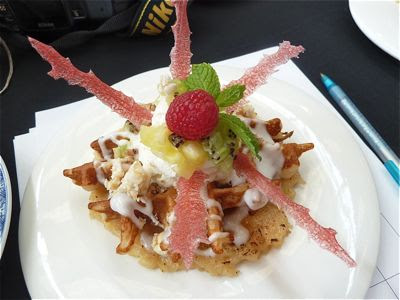 A highlight of the event was the weigh-in of the giant Spam musubi built on site throughout the day. At 628 pounds, it smashed the current Guinness World Record for "Largest Spam Musubi" of 286 pounds earned by Rice Fest last year, registered by Worldwide Ed Ed Sugimoto, who says all the documentation will be submitted to the Guinness committee for consideration again.

For the third year in a row, I was one of the judges for the event's Riceipe contest, and I'm always impressed by the way the chefs elevate the humble grain.

Two-time Riceipe winner Hideaki "Santa" Miyoshi of Tokkuri-Tei was back to defend his title, and impressed us with his lavish chirashi, as beautiful to taste as see. 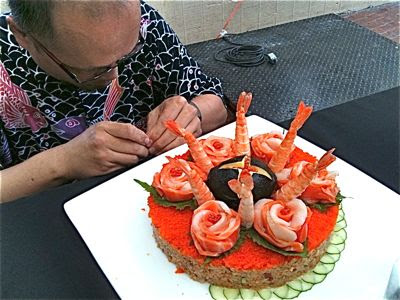 Tokkuri-Tei chef/owner Hideaki “Santa” Miyoshi puts the finishing touches on his chirashi rice entry for the Riceipe contest. The rice contained chopped fish and cucumbers, with a layer of tobiko and roses of salmon, hamachi and scallops. The shrimp made it look like candles on a birthday cake. 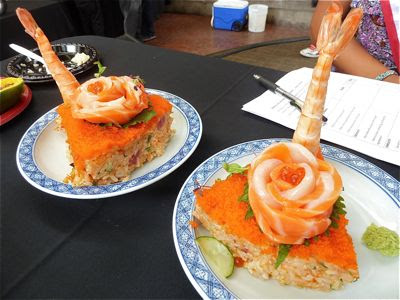 Here's what the judge's portions were like. After the contest ended, we went back to eating Santa's dish. Couldn't let good fish and rice go to waste. 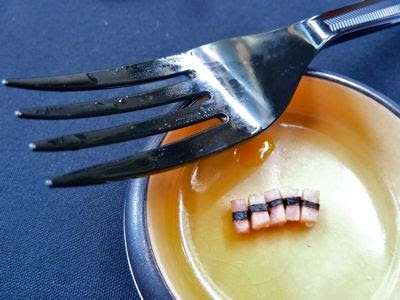 Santa also surprised and amused us with the smallest Spam musubi ever, each comprising a single grain of rice. 'Scuse my dirty fork.

But, he faced some stiff competition from Ward Warehouse home chef Erich Goodhew, from Kincaid's, as well as newcomers Andy Dalan of YogurStory and Jonny Mack of the Eat the Street food truck Caribbean Spice.

It was clear that Goodhew was cooking up creamy risotto. I didn't know what Dalan was making but I was intrigued by the presence of a waffle iron at his cooking station, and, while the other chefs worked solo, he brought in some team mates, Justin Gaddi and Dexter Mina.

I was intrigued by the tantalizing ingredients—among them purple sweet potato, coconut milk, curry spices, habañero peppers and white truffle oil—and scents emanating from Mack's station and couldn't wait to taste his portabello caramel coconut oxtail pulao, a fusion of South Asian and Trinidad and Tobago cuisine. He owes his palate to his mixed cultural heritage, having been born in Trinidad and Tobago and growing up on Middle Eastern fare cooked up by his French Moroccan and Israeli mother. Layered on that upbringing was the family business of running Chinese restaurants.

To scare the judges sitting behind him, he turned around at one point, grinning mischievously before dropping a habañero into his pot of oxtails, mushrooms, chicken and rice. A lot of spices went into the pot earlier and I wondered just how hot his rice concoction was going to be. It turned out not very hot at all, but very savory with South Asian-meets-tropical curry flavor that was accompanied by a helping of mango and cilantro chutney he also cooked up on the spot.

When the competition was over, only two points separated Santa's score from new champ Dalan, who built an intriguing "Naughty & Rice" dessert of waffle astride a chewy flattened rice cake, finished with whipped cream, pomegranate puree, pomegranate rice paper petals and mince of fresh pineapple and kiwi.

Waffles and rice together? Who knew? 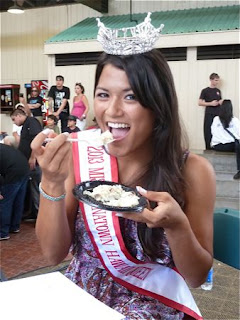 Miss Chinatown Hawaii 2013 Crystal Lee was one of the judges. Even though we enjoy mochi and rice is enjoyed as a dessert ingredient throughout Asia, she couldn't get over the idea of rice as dessert, and couldn't stop raving about YogurStory's creation. 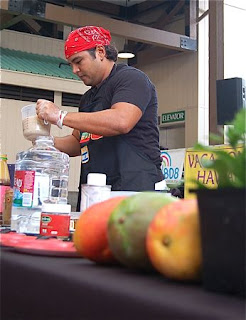 Caribbean Spice's Jonny Mack at work, and also below, with photographers crowding in as he plates his dish of portabello caramel coconut oxtail pulao. 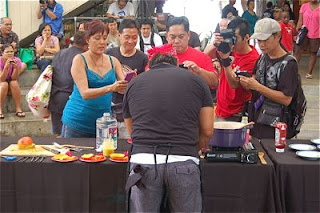 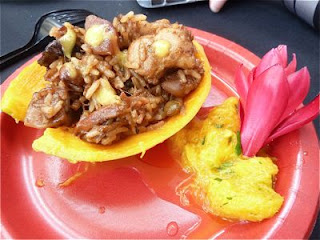 Jonny Mack's creation, with mango chutney, but minus a habañero, below, that was on the other four judges' plates, because he added mine to his pot before serving. 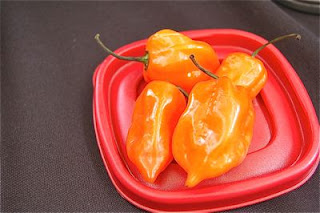 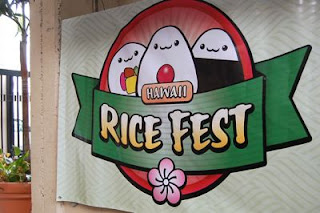 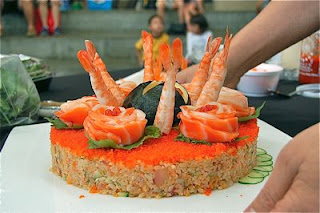 A side view of Santa's creation, where you can see the bits of fish stirred into the rice. 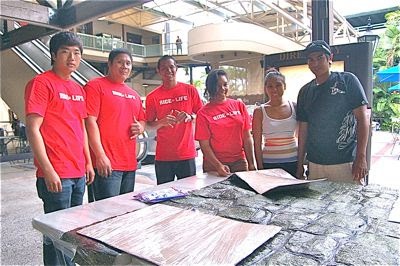 Crews in "Rice is Life" T-shirts worked to connect the sheets of nori, below, that went into the construction of a giant Spam musubi that weighed in at 628 pounds and was documented for a Guinness World Record. The current record is 286 pounds. 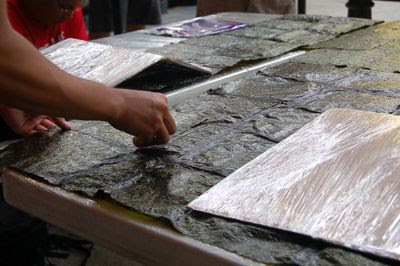 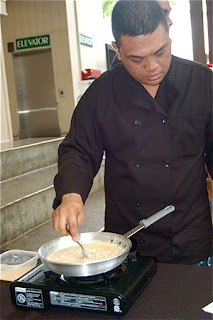 Winning chef Andy Dalan at the start of the competition. 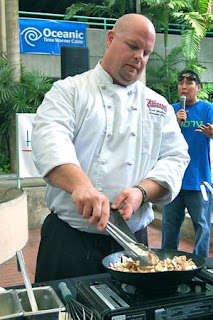 Kincaid's Erich Goodhew stirs the arborio rice and heart-of-palm that went into his risotto, below. 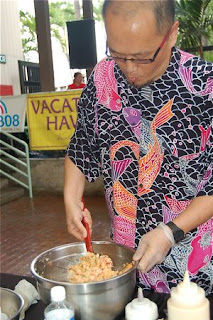 Tokkuri-Tei's Santa Miyoshi stirs his rice before shaping it, below. 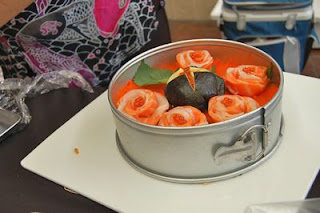