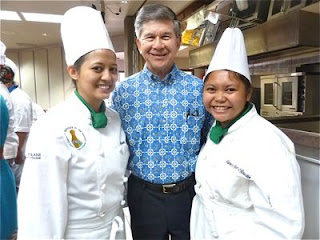 "Nutritionists tell us all this delicious food we eat is not good for us. As we age, this all catches up with us," he said, adding that the ideas of living a healthy lifestyle and enjoying life are not mutually exclusive.

Many would be loathe to give up deliciousness to buy two or three more years of life, so he said the aim of the competition is to encourage young chefs to develop dishes that are both healthy and flavorful, adding that there will likely be increasing demand for their talents in the healthcare industry, whether in the kitchen of senior living homes, hospitals or nursing homes. 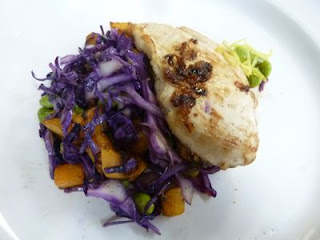 Winners Vanesa Lyn Agustin and Shianti Leighton presented garlic lemon chicken topped with lemon zest and accompanied by sauteed red cabbage, butternut squash and soy beans. They said they chose bright colors to compensate for seniors' diminished palate, believing that seniors would see the visually stimulating colors and remember what these foods tasted like when they were younger. 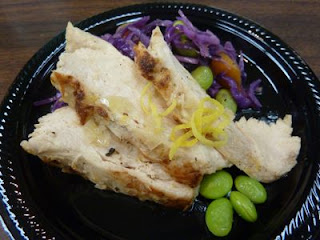 The judges' tasting portion of the dish.

He said we need chefs who will change the perception of nutrition, so that in the future we have "good food and ono food," he said.

I was one of the judges of the event, along with The Pacific Club executive chef Eric Leterc, Kahala Nui board member Roy King Jr., and clinical dietition Grant Itomitsu, a nutrition instructor at KCC.

We were given front-row seats for the tastings, also provided for approximately 100 seniors, while four teams of two culinary students demonstrated putting their dishes together. The students chosen to present their dishes were chosen by blind essay, and each was tasked with presenting a chicken dish.

Of course dishes had to taste good and be beautifully presented, but to encourage people to prepare such meals at home, dishes were also judged on simplicity (the fewer number of ingredients and ease of cooking technique) and nutrition. While delivering their presentations, students were also given marks for selection of nutritious ingredients and knowledge of nutritional benefits correlated to senior health concerns.

Judging was tough, and in addition to the four individual judges, the votes of all the seniors were also heard, comprising one-fifth of the vote.

In the end, the winners were Shianti Leighton and Vanesa Lyn Agustin, who were enthusiastic and earnest in their presentation, outlining the benefits of their chicken and slaw dish on osteoporosis and other conditions. They each received $500 scholarships for their work. 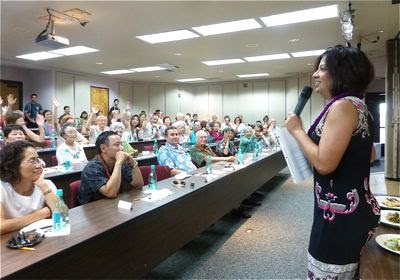 Kim Gennaula emceed the event, which included tastings of all the competitors' dishes for 100 seniors and judges in the front row. 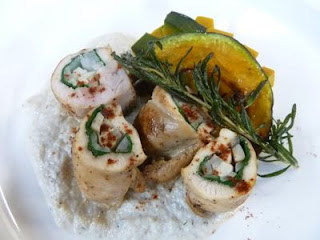 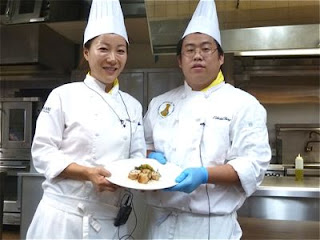 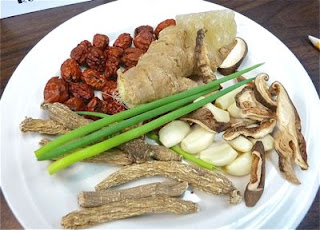 These are some of the ingredients that went into Alexander Quach and Vin Lui's ginseng ginger chicken. Clockwise from top left: red dates, ginger, rock sugar, shiitake, garlic, ginseng and green onion. 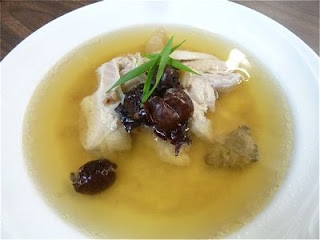 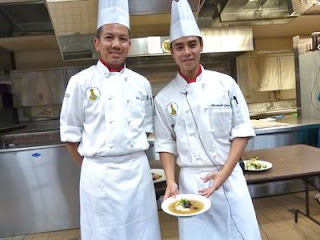 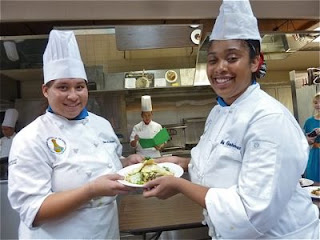 New students Ashly-Monique Gutierrez, left, and Saskia Sams-Yeboah presented their chicken with a green apple and cucumber salad and dill yogurt sauce, with accents of curry and paprika. They placed their emphasis on raw vegetables, so as not to cook away any nutrients. 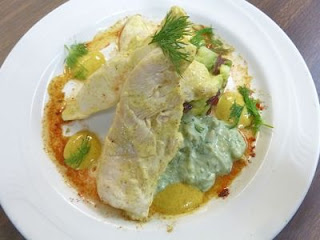