A taste of Chaîne menu at Oahu Country Club 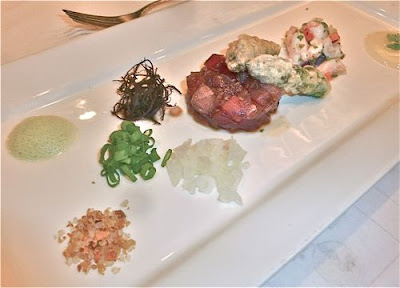 Ryan Manaut, a young chef that joined the staff of executive chef Alfred Cabacungan at Oahu Country Club, was a winner in the prestigious Chaîne des Rôtisseurs' Jeune Commis International Competition, and tomorrow is the last day members can sample the menu he presented in Berlin—with a few tweaks, considering chefs are constantly trying to improve their work— along with fantastic wine pairings by sommelier Randy Ching.

Like the cooking shows "Iron Chef" and "Chopped," chefs in the competition were presented with mystery baskets full of ingredients from which they were to create their meals. After winning the Hawaii competition, Manaut was coached by Kapiolani Community College Culinary Arts associate professor Alan Tsuchiyama, who also sent him several lists of ingredients weekly to prepare Manaut for anything that might come up.

At the competition, chefs—working alone in the kitchen—had a half hour to come up with their menus, and three hours to cook. Manaut said Tsuchiyama had tried to stump him with ingredients like sauerkraut, Jerusalem artichoke and pike, but in practice, he said he was able to come up with a menu in less than half an hour each time.

In competition, the ingredients may have stumped other chefs, but most turned out to be daily fare for any local chef. All chefs were given the same ingredients, and they had to incorporate all in a three-course meal: two racks of Irish lamb, 12 shrimp, 600 grams of ahi, raspberries, blueberries, kalamansi, baby spinach, Thai asparagus, mini carrots, mini zucchini, snow peas, Kenya beans, 12 eggs, 11 Tablespoons of cream, and chocolate. Typical pantry ingredients were also made available to them.

Before entering the competition kitchen, all chefs' belongings were checked to ensure no one sneaked in any secret ingredients. 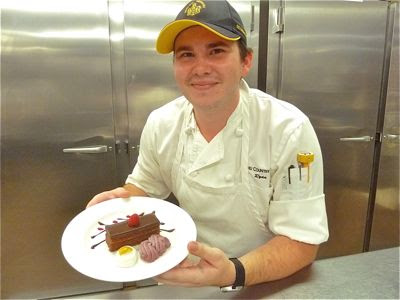 The challenges, he said, were that "all the stove top burners were electric, not the standard gas burners we use. That made temperature controls very hard when trying to make my dessert. I ended up overcooking the semifreddo once, wasting valuable time doing it again.

"I also wasn't used to their little combi-ovens. These are great little ovens that can both bake and steam your product. However, all the directions for the oven were in German so I had to just press buttons and hope for the best. That tactic resulted in burning my cake, so once again, I had to waste time remaking it. Even retrieving spices from the pantry was a chore since they were all labeled in German. I had to open each container to see what was inside."

But, it all turned out well, and considering that prepping and completing the competition has filled three-quarters of his year, he said he's taking a break from thinking about any more contests for now.

In the meantime, I was fortunate to be able to sample the menu as a guest of Chaîne Honolulu chapter Vice Charge de Missions Dr. Thomas Sakoda and his wife Ryuko. 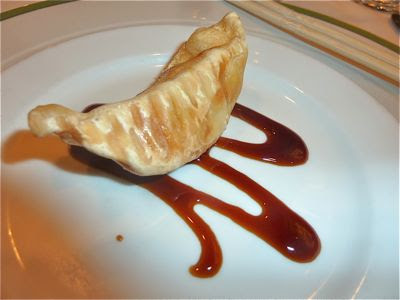 The OCC dinner began with pork gyoza with kabayaki glaze. 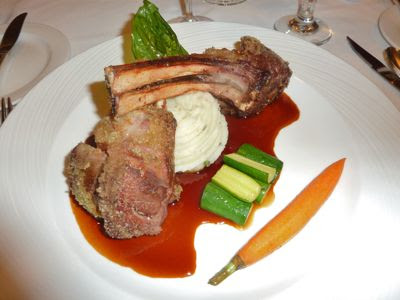 Following the appetizer at top of page, we were presented with the entree of roasted balsamic crusted rack of lamb roulade with lamb jus, roasted peppers and basil, and mashed potatoes, baby courgette (zucchini) and carrot. This was paired with Gigondas, Les Pallieres "Les Racines," 2008. 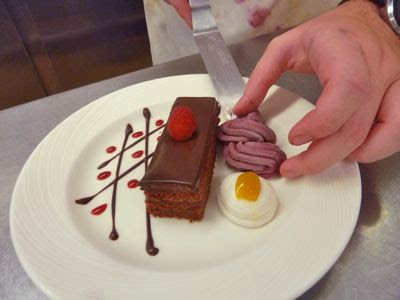 Ryan plates the semifreddo. The experience of the chocolate-raspberry layered cake and blueberry semifreddo were enhanced by Randy Ching's pairing of Banyuls, Domaine La Tour Vieille, 2010. 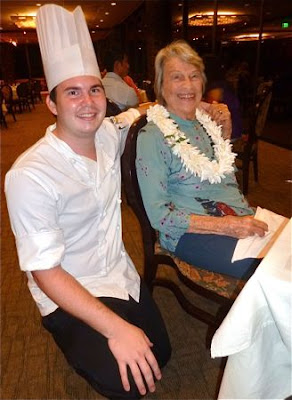 Ryan's grandmother Alison Manaut said she was always happy to be one of the guinea pigs for his cooking experiments when he was growing up. 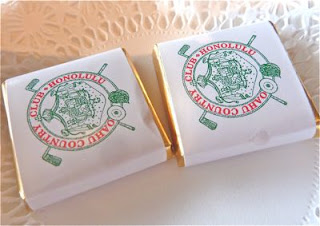 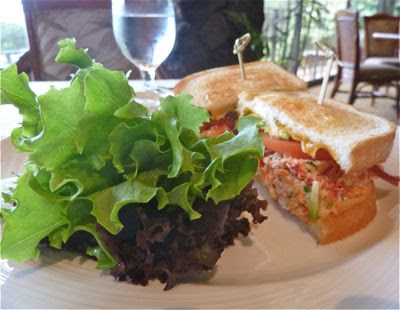 The dinner marked my second visit to OCC in a week. Earlier, I'd been invited to lunch by a member, and we tried one of the newer items on the menu, a lobster-avocado sandwich. 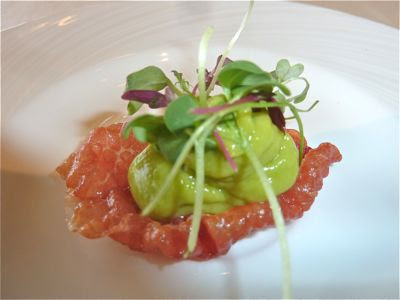 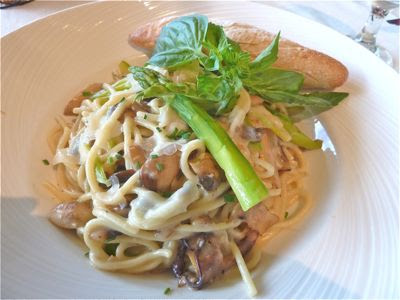 Pasta with mushrooms and basil.