After stopping in to Ni Hao for dinner a few weeks ago, I thought I would drop into nearby Yogurstory for dessert with the idea of making a brief mention as a sidebar to last week's review. It could have been a finale spot to add to your itinerary if you were in the vicinity.

Based on what I'd heard from others, it didn't sound like a destination in its own right, and as I eyed the cavernous space, I wondered how they would fill it on the strength of yogurt, coffee and dessert.


Just one look around, though, and it was pretty obvious Yogurstory demanded its own full story. It wasn't merely the dessert and yogurt shop others had made it out to be. On the chalkboard were offerings of sandwiches, salads and "Fat Pig" fried rice that called for investigation some other time, when I hadn't just eaten dinner.


I ended up there on Super Bowl Sunday, my idea of a national holiday, when Ala Moana Center is virtually empty and so are most restaurants. Parking was good in the lot Yogurstory shares with Sorabol, and while there were more people than I expected, the small crowd was mostly middle-age, subdued and manageable.


Even so, service was slower than it should have been. Heaven help them should they get busy, I thought. They have an ambitious menu but a kitchen that seems to function more like a small neighborhood coffee bar serving light fare to 15 max. Here, the capacity appears to be 50-plus, hungry for much more than coffee. Which is a good thing because the coffee leaves much to be desired, as do the sugary soft drinks, like flavored lemonades that are pretty to look at but more syrup than fruit.


So you might find yourself waiting for food and service, but the wait offers more time to take in the sleek two-story setting. I love the nod to nature, with a tree in one corner of the room, shadowed by a painting of the tree, with more leaf motifs echoed on other walls.


I wondered if staffers considered the large second-story area before taking their jobs. With all the stair-climbing, they definitely won't need to hit the gym much. For diners, one downside of sitting upstairs is proximity to the cafe's music speakers. When I was there, there was much '80s music I didn't care for the first time around.


Long story short, Yogurstory is a hit because people are hungry for simple, inexpensive cafe fare presented without attitude. That's also why there's such a varied cross section of patrons young and old, with large baby shower and birthday parties as well.


While certain menu items can be very froufrou, befitting girlfriend get-togethers, there are enough substantial offerings to make it comfortable and filling for guys as well, starting with that Fat Pig fried rice I had to try. At $9.50 it's shot through with threads of pork adobo, ham, bacon bits and oyster sauce for salty, meaty flavor throughout and enough koge rice bits to give it some prized pan-fried crunchiness. It's topped with julienne egg crepe and pork rinds. Add $4.45 and you can upgrade to the Oinker, with Portuguese sausage sliced in half lengthwise, and two beautiful eggs, sunny side up.


Omelets are tidy and neat. They're nothing spectacular, but their strength is in the quality of ingredients that go into them. I mean, how do you go wrong with a filling of bacon, cheddar, sauteed mushrooms and caramelized onions ($9.75) with herbed potatoes on the side? Or spinach, mushroom and Swiss cheese ($9.75), or a Cobb omelet ($9.75) with chicken, smoked bacon, blue cheese, tomato and avocado?
That Cobb is just as good in the form of a mesclun salad dressed with basic vinaigrette.


They also offer banh mi ($10.50) of curry chicken with a liver pate spread, but the thin line of pate was negligible. It tasted more like a chicken salad sandwich than its Vietnamese counterpart. 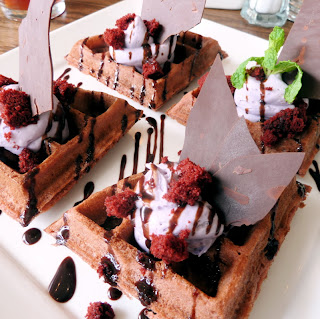 
No doubt you will be tempted by a roster of waffles, but just as you would warn children not to eat dessert before mealtime, I would advise against making these your meal, unless you're OK with the idea of subsisting on sweets. A better idea is to have a salad or sandwich and save the waffles to share for dessert. It's the only way to enjoy the "Red Carpet," for instance, without guilt.


The Red Carpet ($9.95) comprises a chocolate waffle, quartered for four individual portions, each topped with a dollop of taro cream cheese, drizzled with 58 percent Belgian chocolate sauce and sprinkled with red velvet croutons. I will pray for your future body if you eat all this yourself.


The sweet potato waffle ($9.95) is sculpted to resemble a Viking's helmet, dripping with coconut haupia sauce with wafer horns. Dolce de Leche ($9.95) is given more straightforward treatment, like a sushi roll layered with pecan pretzel crunch, caramel and length of halved caramelized banana.


So you're going to struggle with your desire to try a waffle or try yogurt with fresh clean flavors of taro, lychee, pineapple, strawberries and more, with topping options that include mochi, fresh fruit and boba pearls, protected from a potentially germ-breathing public by stainless-steel refrigerator cases.


It's self-serve, so if you grab some, just have it weighed at the cash register counter and it will be added to your bill.


There's much on the menu to sample, and the price is right. You might not realize until you leave that this humble formula marks the start of a beautiful love story.


Nadine Kam's restaurant reviews are conducted anonymously and paid for by the Star-Advertiser. E-mail nkam@staradvertiser.com. 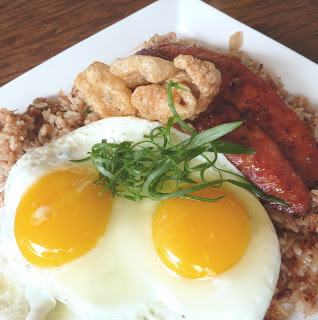 The Oinker builds on Fat Pig fried rice with the addition of Portuguese sausage and eggs.
Posted by Nadine Kam at 1:30 AM