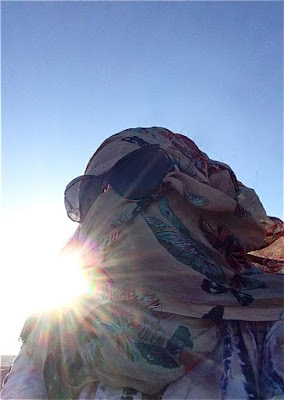 Nadine Kam photos
There's a reason I stayed covered up in the desert. The fine sand gets everywhere.

As a wayward Sagittarian, I often leap before I look, and in signing up for a desert safari in Dubai, I didn't quite know what I was getting into, as in, "How we gonna get there?"

I knew we were in trouble when our driver picked us up in a Toyota Land Cruiser fitted with roll bars, and I noticed that all of the overhead grips (the ones that help passengers lift themselves into tall vehicles) in the cruiser were broken, except the driver's. I guessed that the damage came via previous passengers holding on for dear life.

It was all going fine as long as we were on asphalt, and not knowing the desert terrain, I just assumed it might be a bumpy ride. Pretty soon we came to the end of the paved road, and what ensued was a sport called dune bashing, off-roading on sand dunes that involved drifting, sliding down and surfing the slopes in our oversized vehicles as we screamed our way through the desert. Pictures and video don't do the natural roller coaster experience justice. 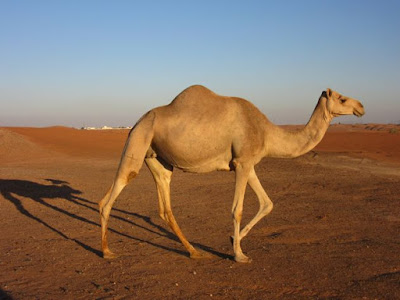 Camels are quite goofy looking. A bunch of them were roaming the Lahbab desert, and for some reason, my travel companions thought we were going to eat camel for dinner.

There was order to the huge caravan of Land Cruisers because everyone had to be going in the same direction. What we didn't want was someone coming in from the opposite direction, rising to top of the same blind peaks, with the potential for a head-on collisions. Check out the video walkthrough on this dune-bashing game link for an idea of what it feels like: freeonlinegames.com/game/dune-bashing-in-dubai. Obviously I could not shoot my own video or photos because I was hanging on for dear life.

Check out our experience here:

I checked out other YouTube videos and note that the screams are the same in any language:

Safaris Arabia photo
Depending on which company you choose, the cost of the desert safari ranges from about $40 USD for the dune-bashing experience, to about $54 for the ride plus dinner.

I felt so much better when the ride was over and we could relax on the Persian rugs that lined the ground of a Bedouin-style camp, with low tables for dining.

The English word "Bedouin" is the derived from the Arabic words "bedu," referring to those who live in the open desert, and "Badawiyin," a generic name for a desert dweller.

Although the Bedouin population—from the Sinai Peninsula of Egypt to the Sahara Desert of North Africa—numbers about 4 million today, only about 5 percent of Bedouins still live as nomads in all of the Middle East because it is becoming increasingly dangerous to do so.

In that moment, it was so beautiful being under the open sky, that I could easily see the attraction to the desert lifestyle. I would have loved to spend the night there. Throughout Dubai, I could see a fascination with the night sky in the architecture and murals. Even on our Emirates flight, there was enough empty seats on the way over so that I could lie down and stretch out, and looking up, the ceiling was full of tiny twinkling lights, like the night sky. 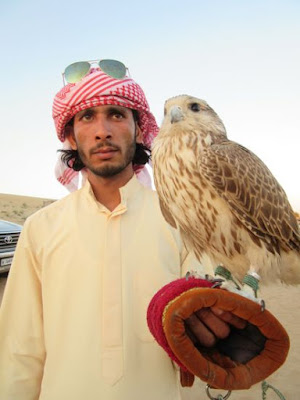 Nadine Kam photos
The Dubai desert safari is their equivalent to our luau. Once we got to our destination, there were camel rides and we could take a photo with this baby falcon, Rayna. I already loved raptors, but now I really wish I could have a falcon. This bird was so sweet and much heavier than she looks. 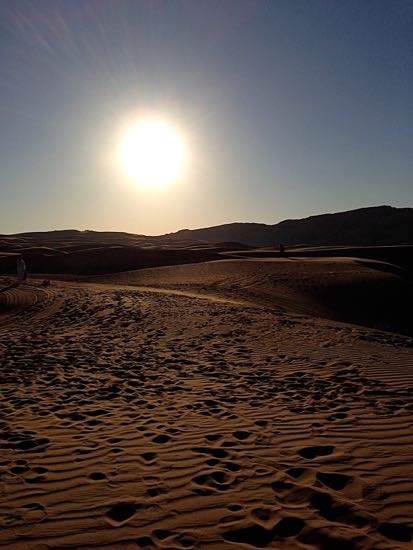 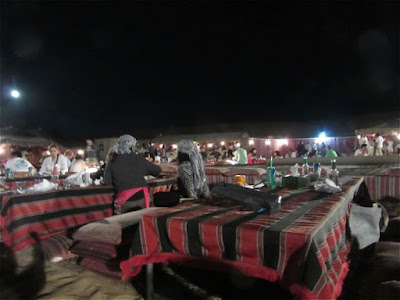 It was easy to see the attraction to the Bedouin lifestyle at night, while dining at low tables, being entertained by dancers and relaxing on comfortable cushions. 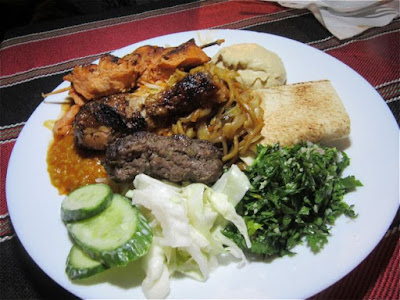 A buffet dinner was set up in tents, and options included plenty of salads and grilled meats.

For some reason, my traveling companions were convinced that camel would be on the menu that night. Nope, we were just eating the traditional Middle Eastern combo of beef, chicken and lamb.

In a normal time, I would have been game to taste camel, but I was sick before I left Hawaii and was sick the entire trip. I was alarmed when a sign before boarding the flight to Dubai warned of MERS, or Middle Eastern Respiratory Syndrome that was killing people, because my immune system was already weak.

It was only after returning from the desert—and being exposed to camels—that I looked up the risk factors for MERS, and they include exposure to camels and eating camel meat!

More than 90 percent of dromedary camels tested positive for MERS antibodies, suggesting that MERS or a related virus had infected dromedary camels. Other animals tested, water buffalo, pigs, cows, sheep and goats, did not have the antibodies.

Which meant a visit to Local House restaurant in the Al Bastakiya region, was also out of the question. It's the only restaurant in Dubai that serves camel burgers.

And that meant camel milk chocolate as omiyage was also out of the question. I wouldn't give my friends something I wouldn't eat.

Following are a couple of snippets from the evening's performances, including a whirling dervish. I don't know how he does it without getting dizzy. Afterward, he invited one of the audience members on stage to give the dance a whirl, and she fell to the ground after about three spins.

—————
Nadine Kam is Style Editor and staff restaurant critic at the Honolulu Star-Advertiser; her food coverage is in print in Wednesday's Crave section Contact her via email at nkam@staradvertiser.com and follow her on Twitter, Instagram and Rebel Mouse.