Umami at work at Bombay Palace 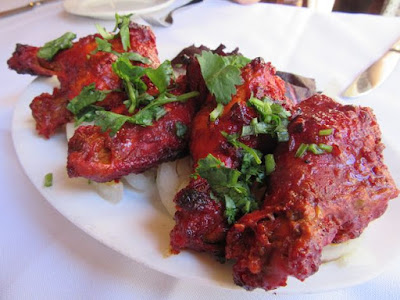 Nadine Kam photos
Spicy tandoori chicken wings at Bombay Palace. You pretty much must love cilantro, what they call dhaniya, because it tops or is incorporated into almost every dish.

If you're on a diet, you might want to eat more Middle Eastern cuisine. I'd read about the effects of umami on satiety before, but at Bombay Palace, I experienced this science at work firsthand.

Basically, my mouth was saying, "More, more, more." But my brain and stomach were saying, "You can stop now." The food is so delicious I wanted to keep savoring every bite, but, as I mentioned in my restaurant review, in three visits I was pretty much done after eating a papadum, a single jumbo prawn, a few nibbles of tandoori chicken, and a couple of spoonfuls of curry.

It was a shocker because I'm accustomed to eating much more than that in one sitting, and in eying the small serving pots, my initial thought was, "That's not going to feed four people." And yet, four people could not finish half of four pots.

Umami is described as the fifth taste after the basic flavor sensations of sweet, salty, bitter and sour. It encompasses the experience of savory, rich, meaty, full-bodied flavors indicative of the presence of the amino acid glutamate. When combined with proteins it delivers a satisfying mouthfeel that speeds satiety so you eat less, and feel fuller faster. 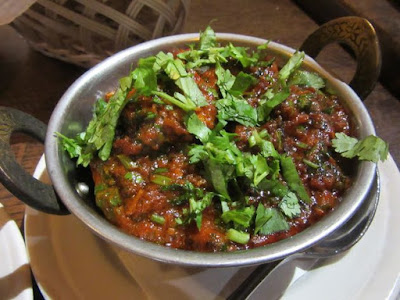 The vegetarian/vegan set will find a lot of options, including baingan bhartha, roasted eggplant, one of my favorite dishes, along with aloo matar, a simple stew of potatoes and green peas.

This all meant I ate less of my favorite cuisine than I would have liked, but there's always return trips.

Bombay Palace took over the space in Discovery Bay that was formerly home to Monsoon India. Owner Imran Khan (not the cricket star turned politician) adopted an India-related name for his restaurant for continuity and familiarity. But many of the dishes we think of as being Indian are also common in his native Pakistan, due to the nations’ shared history, before splitting into two independent nations in 1947.

In addition to the curries they share in common with neighboring Afghanistan and Iran, Pakistani cuisine incorporates the sweet-sour notes of pomegranate seeds, and in keeping with the nation’s predominately Muslim culture, there is no pork—forbidden by faith—on the menu.

Why are Middle Eastern curries some of my favorite dishes? I love the complexity of the spice and herb combinations used, and an article that appeared last March in the Washington Post explained the phenomenon. You can read the article here. But in a nutshell, although these dishes may contain only seven ingredients, their chemical compounds and the way they interact amount to almost 200 out of the roughly 381 distinct flavors known around the world.

Come and taste! And no, I didn't eat all this in one sitting. Here's what I tried over four visits: 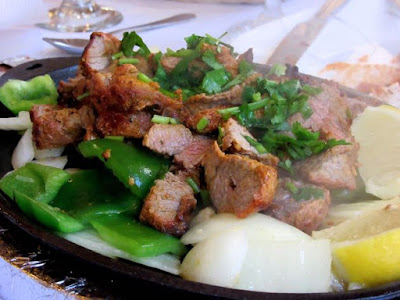 Love the kadhai, a Pakistani dish of lamb sautéed with onions and bell peppers, served on a sizzling platter. There is also a chicken option, but I think the lamb is more flavorful. Recently $18.95. 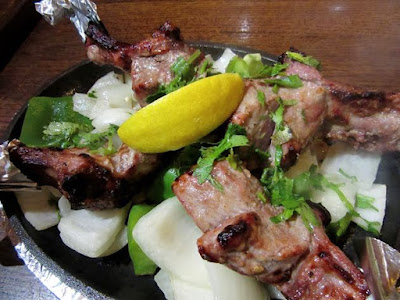 Speaking of lamb, marinated lamb chops are also wonderful, but the cost is nearly double, at $34. 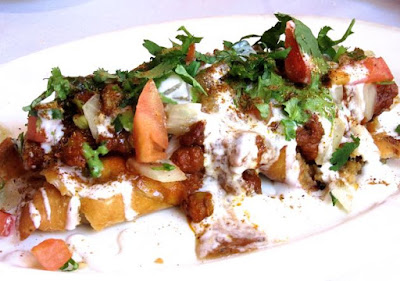 I don't typically order samosas because I often find them dry. Here, samosa chana chaat is the solution. They're topped with chopped onions and tomatoes, than drizzled with yogurt and house blends of tamarind sauce and mint chutney. It's all chopped and mixed together at the table for a moist, filling appetizer. 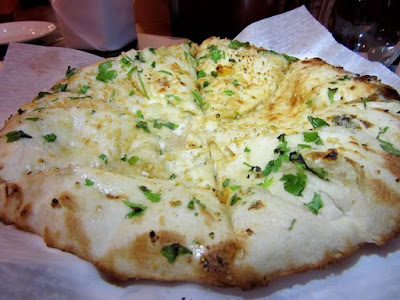 Curries can be eaten with rice, but I prefer to use my hands, scooping it up with a variety of delicious naan, this one flavored with garlic and cheese. 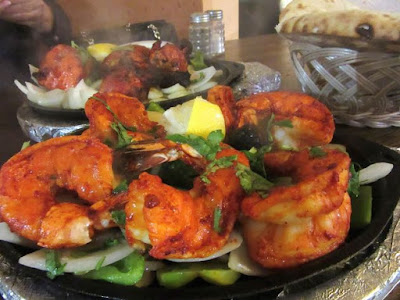 Steam rises from jumbo prawns straight from the tandoor. 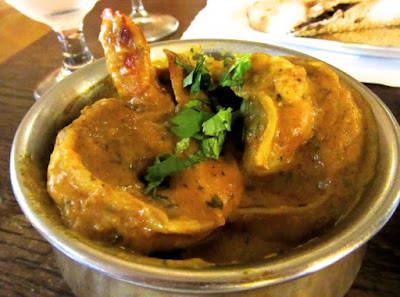 Fans of coconut curries will like the savory one served here, with shrimp (pictured), chicken or mahimahi options. 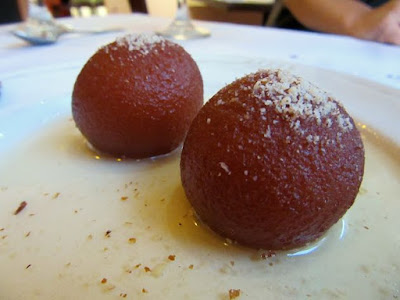 Beyond kulfi, a dense ice cream, I am not a big fan of desserts from this region. Gulab jamun are housemade doughnut balls soaked in honey syrup. Would you do this to andagi? It's treacly sweet on the outside and dry on the inside. 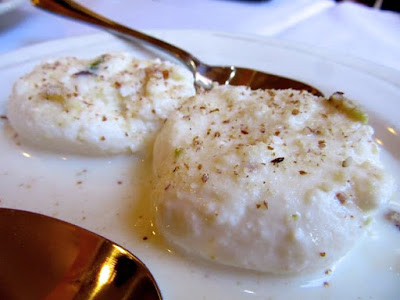 A light, grainy rice pudding was a little better.

—————
Nadine Kam is Style Editor and staff restaurant critic at the Honolulu Star-Advertiser; her coverage is in print on Wednesdays and Thursdays. Contact her via email at nkam@staradvertiser.com and follow her on Twitter, Instagram and Rebel Mouse.
Posted by Nadine Kam at 4:01 PM