It's savory vs. sweet in Off The Wall Craft's food fight 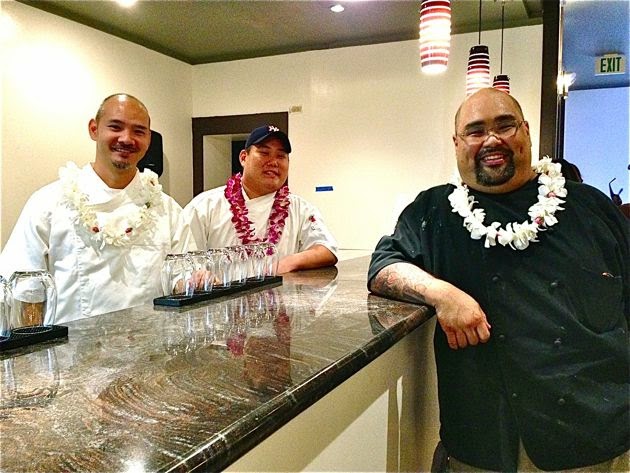 In the spirit of fun, Off The Wall Craft Desserts & Kitchen (OTW Craft), tried to get a lover’s quarrel started on Valentine’s Day.

There could be no better opening day to demonstrate its concept than with a Chocolate Lover’s Spat party, a food fight pitting those who opt for #DessertFirst vs. the traditionalists who put #FoodFirst.

Perhaps it wasn’t entirely fair that dessert and pastry chef Ed Morita had a dominant spot in the dining room, while chef de cuisine Andrew Mitani was off in a side room, busily cooking up mocha brisket sliders, mole-sauced BBQ ribs with daikon gratin and rafute-style sushi with braised Kurobuta pork belly and chocolate-peanut butter-miso glaze. Hmm, that sounds a bit like joining the frenemy. 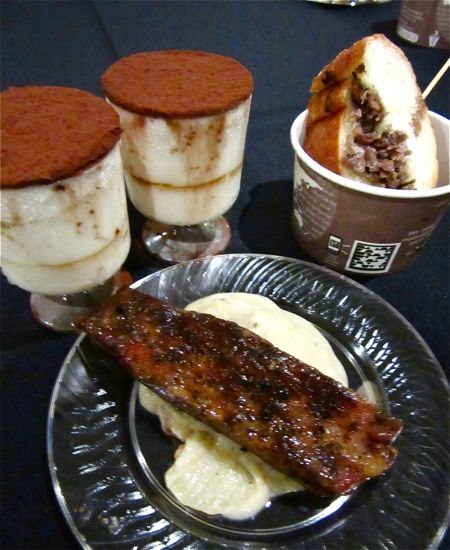 In a battle for supremecy, #dessertfirst and #foodfirst tied on the Valentine’s Day grand opening of Off The Wall Craft. Pictured here are beeramisu desserts, mole sauce ribs and delicious mocha brisket sliders.

In the main room, Morita was slicing his chocolate-filled Twinkies and Nutella-roasted banana sandwich rolls, laid out with chocolate-peanut butter crunches, kabochasadas, and a couple of different S’more tarts.

The new restaurant concept by Off The Wall owner Kyle Matsumoto and Morita, formerly of Highway Inn, Kakaako, was created to offer local-style comfort food with a twist. It also raises awareness of those individuals who can’t wait until the end of a meal to order dessert, or who won’t risk filling up on other courses before having dessert first. The first time I was with someone who ordered dessert first, I was a little shocked. I admit I’ve become less of a dessert person over time and the less sugar I eat, the less I crave. But hey, people are entitled to dine the way they prefer, and if they want to start with chocolate and sugar or cake and strawberries, so be it. 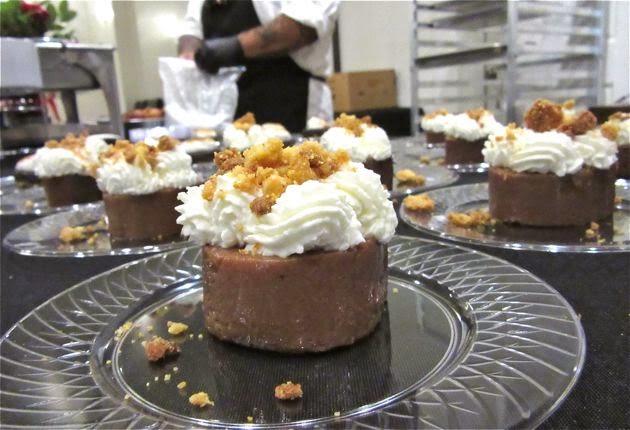 It’s probably every pastry chef’s lament that they feel like second-class citizens in the kitchen. (It’s the same in the newsroom when you pit feature writers against news writers, when news simply carries more gravitas than lifestyle coverage.)

About his half of the menu, Morita said, “Every restaurant I’ve ever worked at treated desserts as an afterthought. That is why I knew that if I ever had the chance to develop a dining concept, it would revolve around highlighting dessert first.”

Mitani will ward off competition with familiar local cuisine infused with Japanese, Korean, Italian, and French flavors, and the two will be working together to blur the lines between sweet and savory. It’s an experience that will challenge your taste buds.

The chefs tested some of their dishes during a preview event that took place Jan. 21: 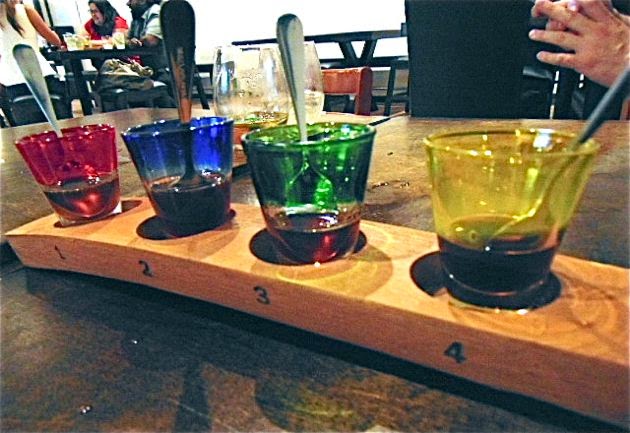 One of the most interesting aspects of the OTW Craft experience was sampling Morita’s smoked honey that goes into cocktails and desserts. From left are Moscow Mule, Manhattan, Sazerac and Falernum-inspired honey. I urged them to offer a flight so that other diners might better appreciate the work behind the desserts. Nuance is sometimes lost at the table. 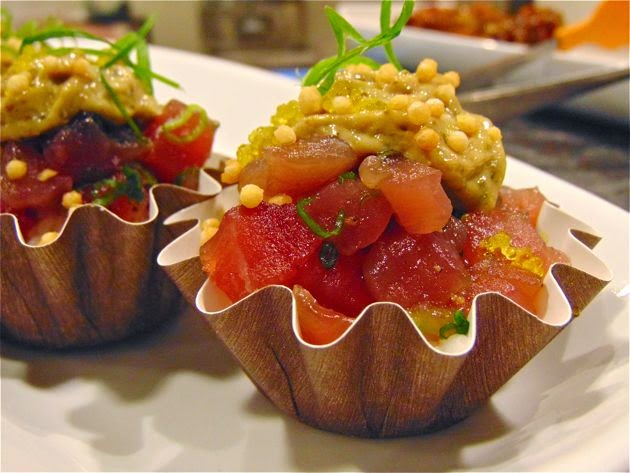 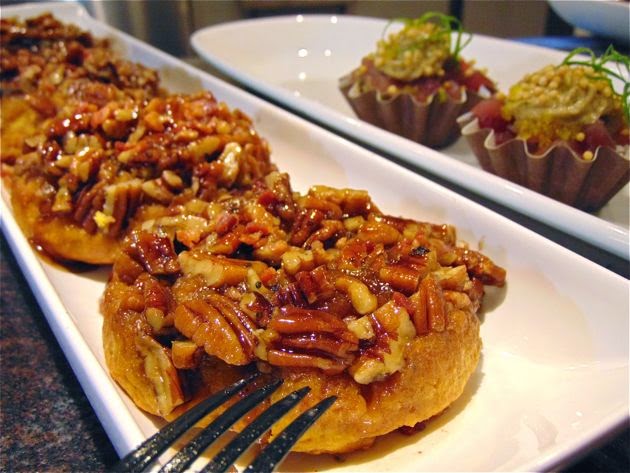 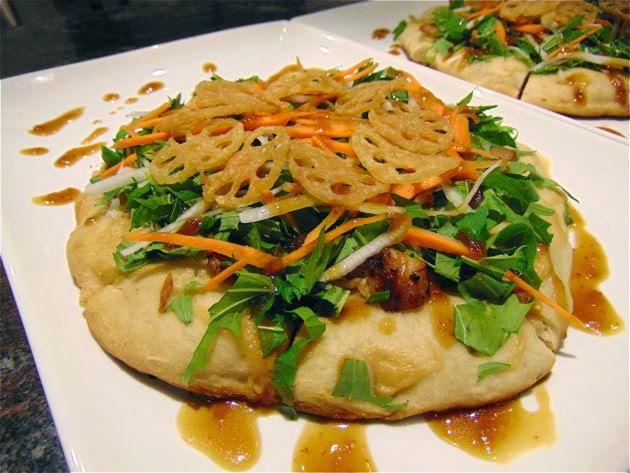 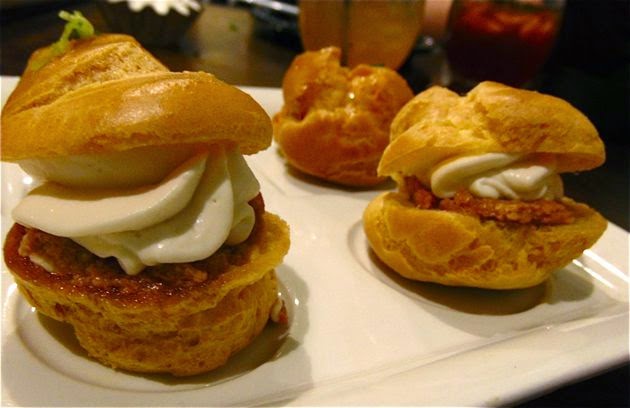 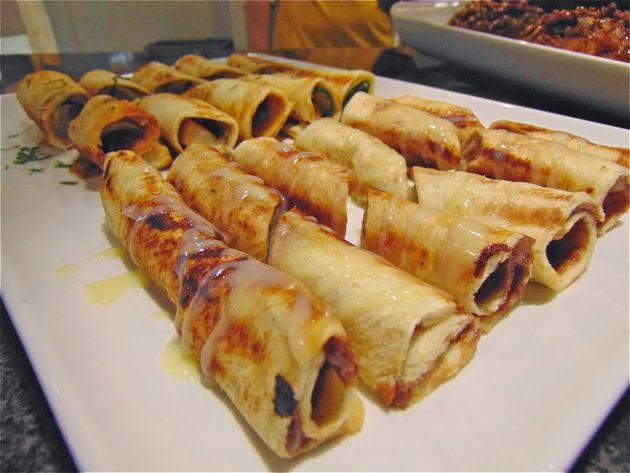 A mix of eggplant rolls (back) and Nutella rolls with white chocolate-haupia sauce.
Posted by Nadine Kam at 6:01 PM