Revisiting the Mai Tai at CookSpace 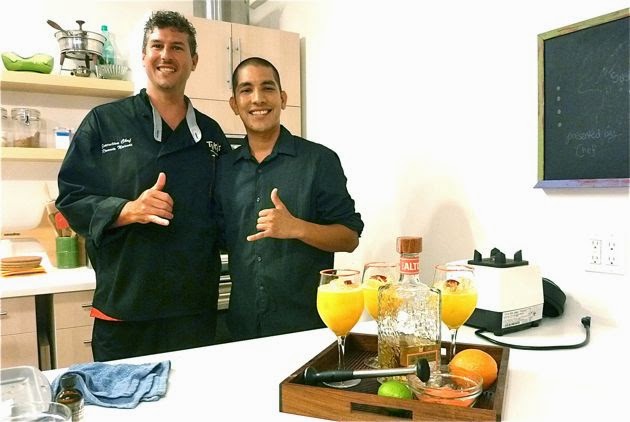 Executive chef Ronnie Nasuti and mixologist Alejandro Alvarado, both from Tiki’s, were in the kitchen of CookSpace Hawaii Aug. 30, where they demonstrated the how-to of the classic 1944 Mai Tai and other cocktails, and simpatico pupu, though of course, with their own spin.

For instance, to the classic mai tai, which includes dark and light rums, orange curacao and orgeat syrup, among other ingredients, Alvarado adds a layer of lilikoi foam. 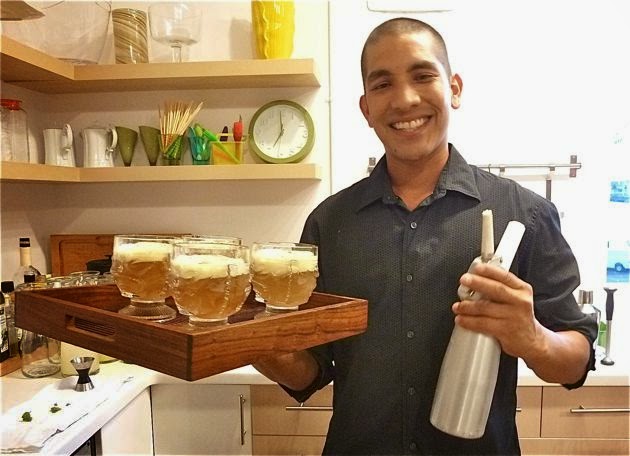 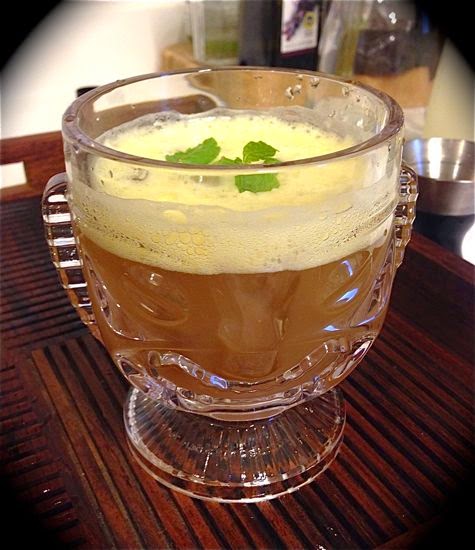 Sherri and Lloyd Kandell are fans of tiki culture and exotica, which Lloyd recreates through the music of Don Tiki. 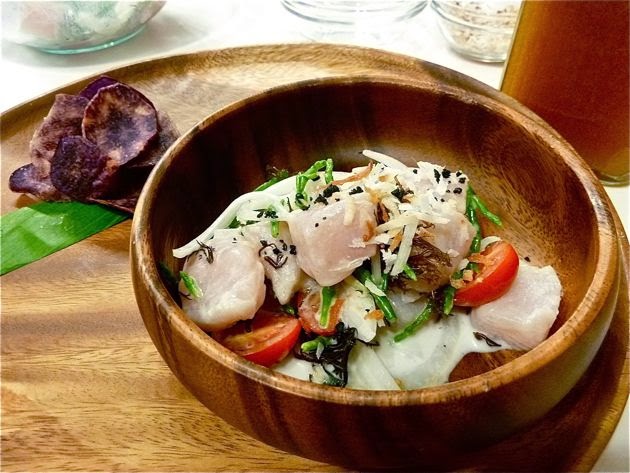 You could not have the potent mai tai without food, and Nasuti’s first offering was the Tahitian lime-marinated “poke,” poisson cru, sprinkled with sea asparagus and toasted, shredded coconut. Next came furikake-charred ahi sashimi with a takuan-wasabi sauce. Amazing! 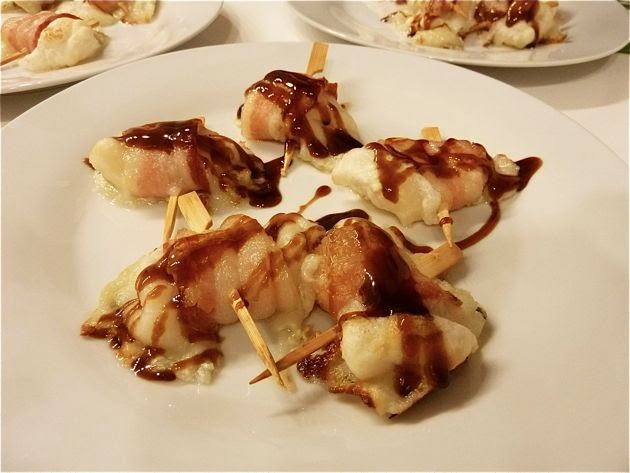 The last dish was bacon-wrapped bleu cheese mochi drizzled with kabayaki sauce, bubu arare and nori, not seen here because the chef kept adding and adding. Even at the table, he was adding a splash of truffle oil. In that way, contemporary chefs work much like painters or fashion designers. Nasuti squeezes lime over ono before finishing the poisson cru. 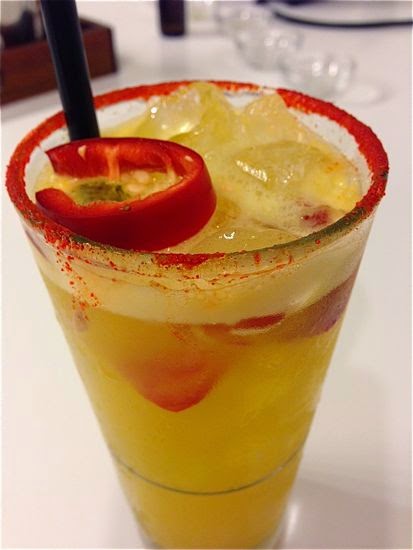 Alvarado’s lovely to see, lovely to sip “Hula Ahi (Firedance),” a blend of mango puree, orange juice and tequila, with the heat of jalapeño and a rim of li hing powder. 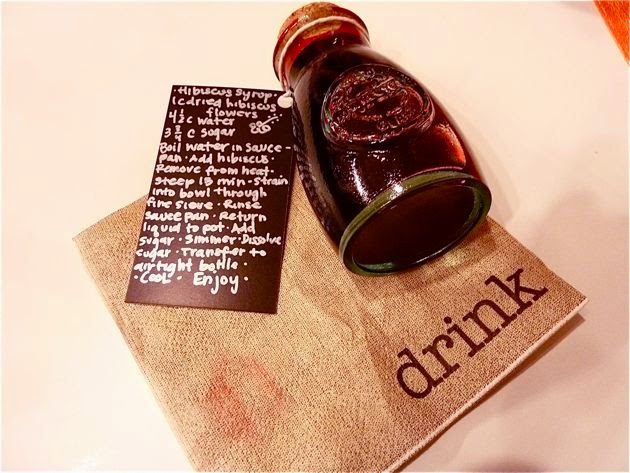 Alvarado also created his “HibisKiss,” incorporating Absolut Hibiskus and housemade hibiscus syrup, and at the end of the evening, guests were sent home with a sampling of the hibiscus syrup, as well as recipe to make it. 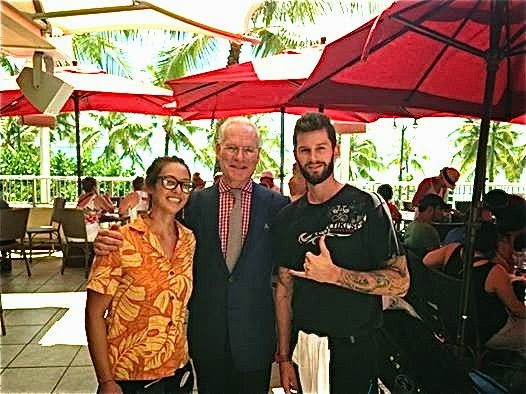 Photo courtesy of Tiki's Grill & Bar
In a Facebook post dated Aug. 21, Tiki’s Grill & Bar welcomed “Project Runway’s” Tim Gunn as a guest. Speculation is that he was in town to check on the progress of Hawaii designer Kini Zamora prior to New York Fashion Week, which began today.

So, what can we deduce in light of a number of Tim Gunn sightings around town? I’m sorry, but a person who dresses like Tim Gunn isn’t likely to remain incognito long when he pops up in Waikiki. And I really don’t think he’s here for the beach.

Gunn, of course, is the mentor to the competing designers in Lifetime television’s “Project Runway.” And one of our own, designer Kini Zamora, is still in the game.

Those familiar with the series know up to five finalists are sent home to create Fashion Week-worthy collections, and Gunn typically heads out for hometown visits to make sure the designers are on track. This takes place a few weeks before they are due back in New York City for Fashion Week and the show’s finale.

There are usually three finalists, with one or two more designers thrown into the mix to act as decoys to keep the suspense factor high.

The New York shows started today and the “Project Runway” show is slated to take place tomorrow at 4 a.m. Hawaii time (10 a.m. EST). I managed to get a couple of people into the show in my place and they promised to send photos.

With many media outlets covering the event, we’ll see every collection, though we won’t know the placements of the designers until the show’s finale. I really wish they would time the episodes to coincide with the fashion shows in real time, like they did in the very first season. Otherwise, the finale becomes a bit anticlimactic.

———
Nadine Kam is Style Editor and staff restaurant critic at the Honolulu Star-Advertiser; her coverage in print on Wednesdays and Thursdays. Contact her via email at nkam@staradvertiser.com and follow her onTwitter, Instagram and Rebel Mouse.