Around the world via Hawai'i Food & Wines Festival 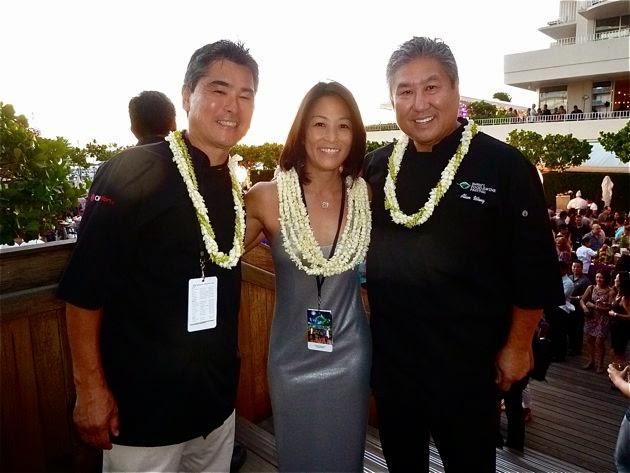 Once again, the Hawai’i Food & Wine Festival proved to be a feast for the eyes, mouth, opu and even the ears for those who managed to catch chef Hubert Keller’s stint as a DJ.

The state’s largest food festival opened at the Waikoloa Beach Marriott Resort on Aug. 29 and moved to the Hyatt Regency Maui Resort & Spa in Kaanapali on Aug. 31 before landing on Oahu, where the event started by chefs Roy Yamaguchi and Alan Wong began just four years ago.

On Oahu, the festival encompassed a heady four days of farm tours, wine tastings, next-generation kiddie event, Battle of the Brunch chef showdown, and of course, the highlight tasting events featuring cuisine cooked up by our local talent, joined by more than 35 international celebrity chefs.

The charitable event was started as a way of raising funds to benefit culinary education and farming in Hawaii — two issues close to the hearts of the chefs, who have been advocates of sustainability since entering the dining scene a quarter century ago before we really had a word for it.

Back then, it started with supporting the work of farmers and collaborating in bringing something unique and special to the table. Today, it is about so much more: survival, safety, mindfulness, environmental protection, our future. It is about eating local, but the repercussions are global.

This year I was able to make it to two of the signature events, A Lucky Modern Buddha Belly that took place Thursday at the Modern Honolulu, and Corks & Forks on Saturday at the Hawai’i Convention Center.

My pick for food hero was Josh Lanthier-Welch of Ono Pops, who at the Corks & Forks event delivered an amazing Baked Alaska paleta of lilikoi, dipped into Italian meringue, then brûlée’d by torch, for an amazing caramel meets tart citrus flavor, with a fluffy meets creamy texture. So amazing! As soon as I walked into the event, people were raving about it, but I’m not a dessert-first person so decided to check back later. I was a big fan by evening’s end.

Here’s a sampling of what was on the table: 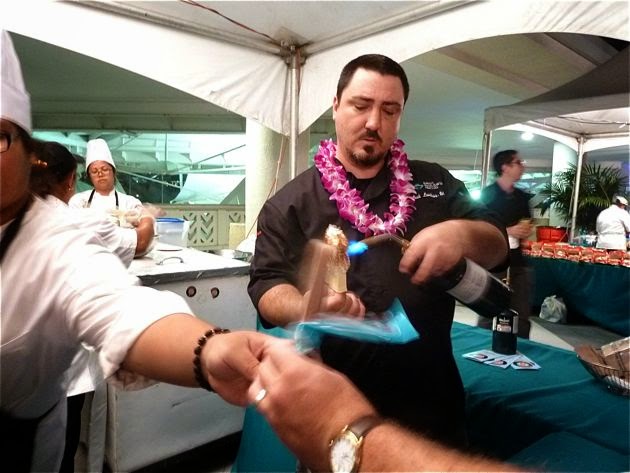 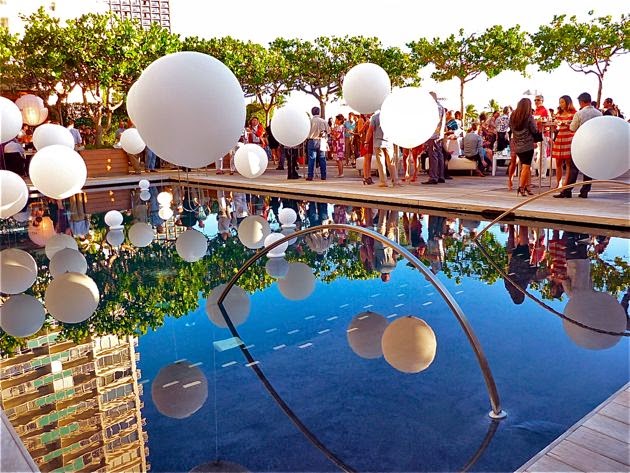 The poolside setting at the Modern. With so many people on deck clamoring to get to the food, I felt the water’s gravitational pull and kept thinking, “Don’t fall in, don’t fall in.” 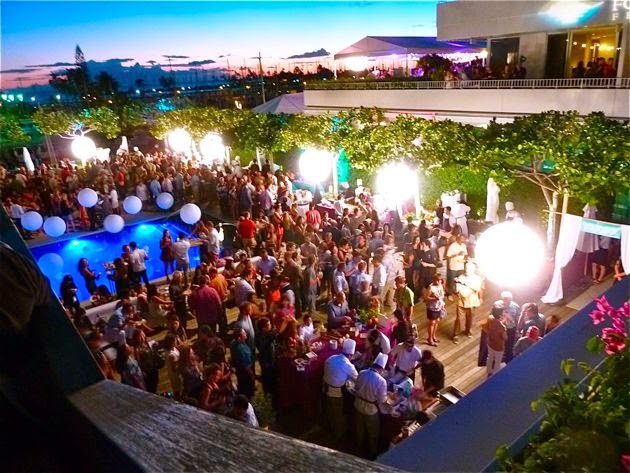 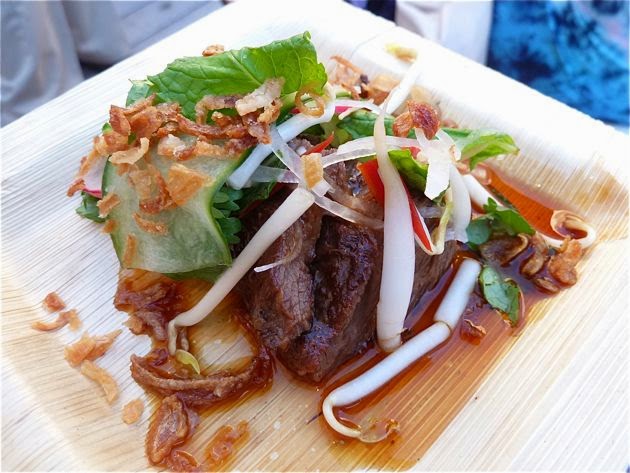 Philip Johnson of e’cco, Brisbane, offered tender soy-braised beef cheeks with Asian herb salad and crispy shallots. The flavors are nothing new to us. 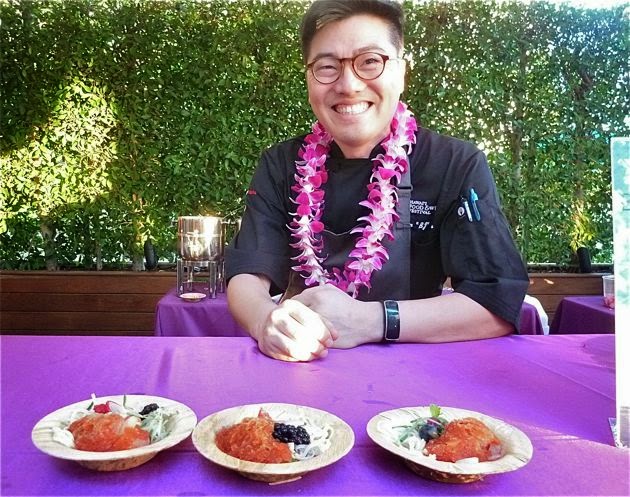 Byung Jin (B.J.) Kim of Korea’s Bicena, offered up a pungent and spicy dish of urchin and snapper with gochujang ice, below. 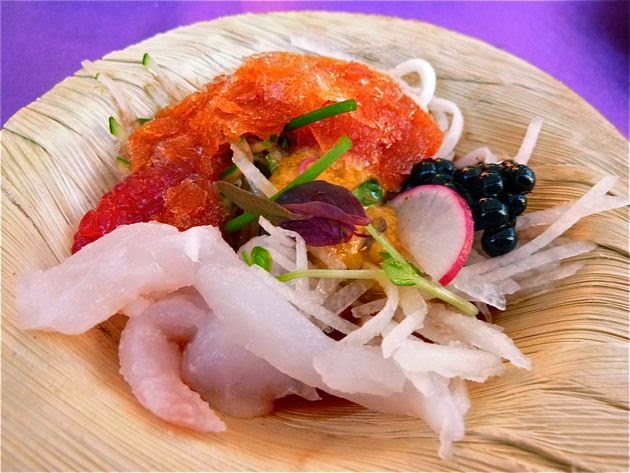 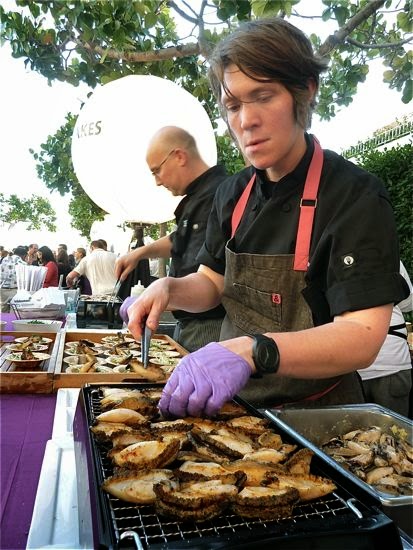 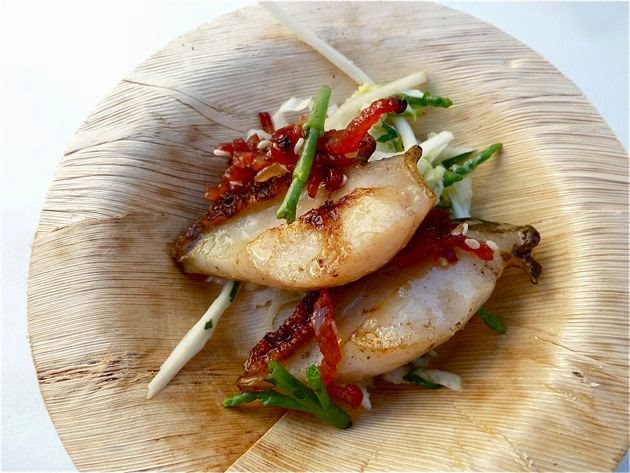 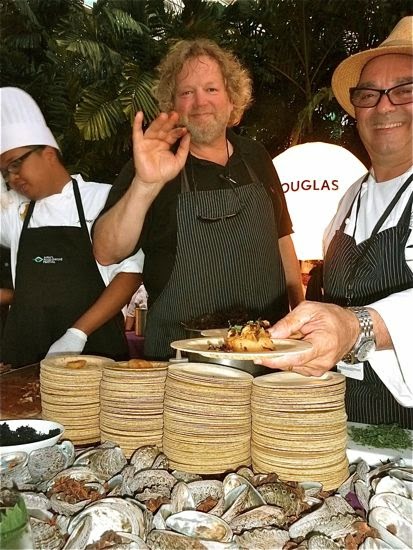 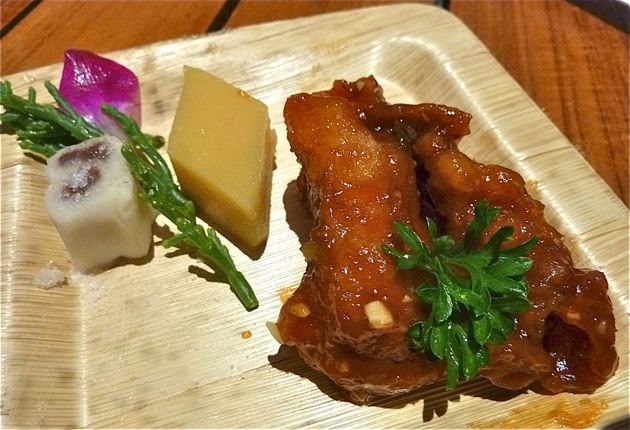 Many people loved the sweet-sour chicken cooked up by Peng Yu of Qing Yun Lou in Beijing. Much more interesting to me were the side dishes of various bean pastes masquerading as cakes.

Meanwhile, at the Convention Center: 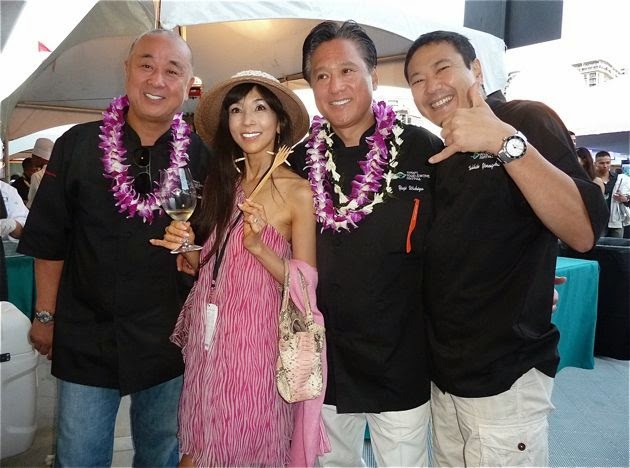 The chefs were all working so hard, it took some time to corral them all, but Nobu’s Nobu Matsuhisa, left, and Yuji Wakiya, second from right, of Japan’s Wakiya Restaurant, took time to pose with pastry chef Toshihiko Yoroizuka and his wife, actress Naomi Kawashima. 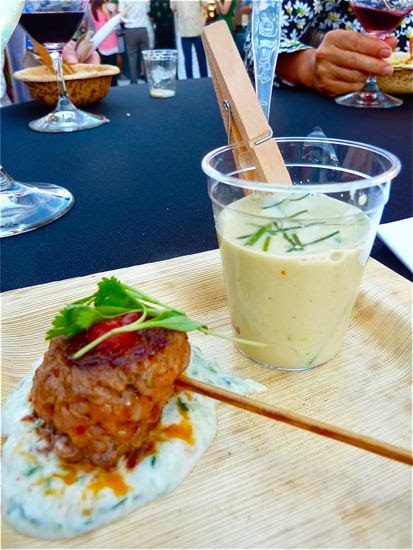 I was also a fan of chef Hubert Keller’s Thai coconut and basil soup and spiced meatball. 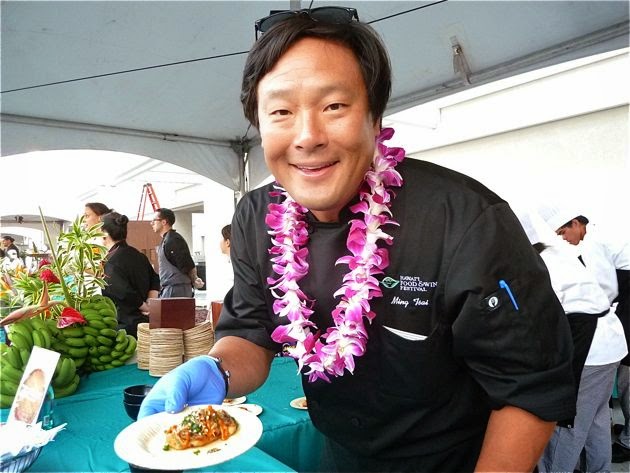 And Ming Tsai offered terrific shrimp pancakes with cucumber kim chee and gochujang aioli. How good was it? I ate the whole thing before realizing I didn’t take a closeup photo of it. 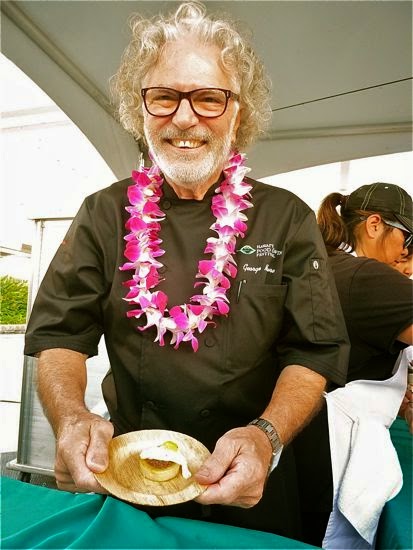 Not to be outdone, Honolulu’s Chef Mavro offered a twist on mochi, this one incorporating potato, topped with oxtail rillettes and quail egg, below: 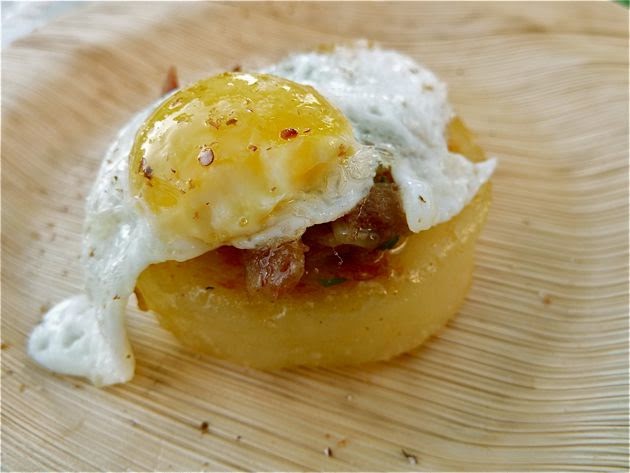 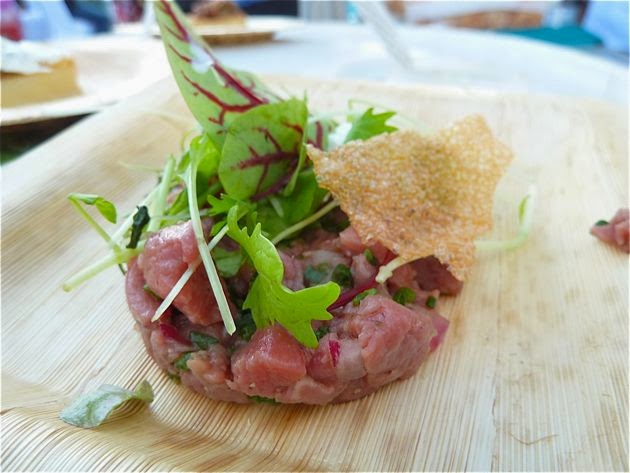 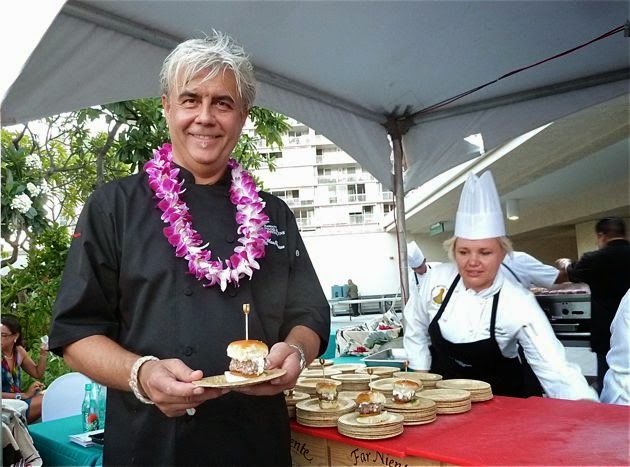 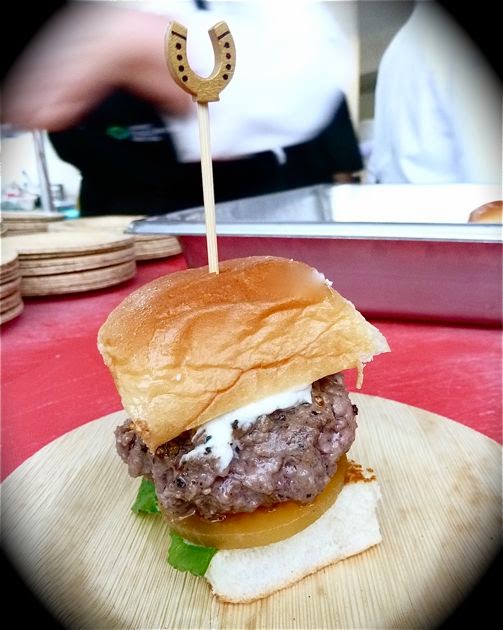 ———
Nadine Kam is Style Editor and staff restaurant critic at the Honolulu Star-Advertiser; her coverage in print on Wednesdays and Thursdays. Contact her via email at nkam@staradvertiser.com and follow her on Twitter, Instagram and Rebel Mouse.
Posted by Nadine Kam at 7:29 PM