Somethin's cooking at The Bar Honolulu at Honolulu Club 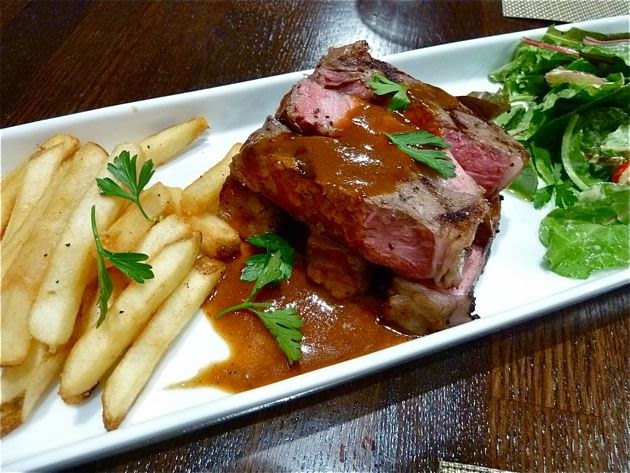 If you considered yourself a foodie back in the early 1990s through 2001, chances are you were a fan of Moumen El Hajji and wife Holly Hadsell’s Hajji Baba, and later Beausoleil restaurants in Kahala and Manoa, respectively.

Sadly, after 9/11, business dropped for many, and the couple closed Beausoleil in favor of riding the film and television production boom, providing on-set catering services. Well, that was good for many a TV and film star on productions ranging from “Planet of the Apes” to “Godzilla” and “The Hunger Games: Catching Fire.”

Well, lucky for us, they’ve emerged from the artificiality of film sets back into the real world, where we can once again enjoy their cuisine, this time at The Bar Honolulu inside Honolulu Club.

It’s a little-known secret that you don’t have to be a member of the upscale fitness facility to enjoy the cafe/bar over to the left of the reception desk. Just saunter in and act like you belong. The great thing about the bar menu is the cost is quite reasonable for the quality of the food offered because the cafe operation is partially subsidized by dues-paying members. Prices range from $4 for Moroccan-style marinated olives, to $18 for New York strip steak and harissa-spiced fries. 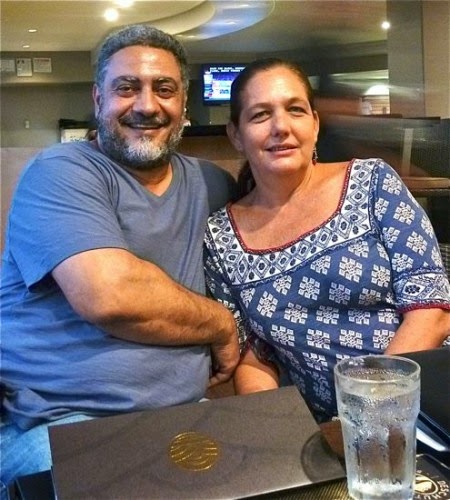 Moumen El Hajji and Holly Hadsell are back in the public eye.

Considering the high cost of membership, food here has never been worth writing about, so new owners have taken that into account, and for his part, Moumen said he’s still experimenting and putting dishes out there, allowing diners to vote with their orders, requests and repeat visits. But it’s hard to subtract when he’s a master at blending spices from his native Morocco with favored local ingredients ranging from patis to coconut and lemongrass.

And, the bar is also giving a shout-out to mixologists around town with a menu of drink specialties from the likes of Pint + Jigger’s Dave Newman, Nobu’s JJ Anchetta, Pig and the Lady’s Kyle Reutner, Chandra Lucariello of Southern Wine and Spirits, and Alicia Yamachika of the soon to open Livestock Tavern.

They’ve been operating under the radar for a while, but are prepared to go public with their first big event, the Honolulu Club Brunch Labor Day Edition, taking place Aug. 31, with two seatings, at 11 a.m. and 1 p.m., at a cost of $35 for members, and $40 for non-members.

There will be mimosa and eggs Benedict bars, lots of fresh fruit and pastry, and a passed menu of gazpacho, frittata bites, crab and lemon bread pudding, shrimp and edamame pot stickers, pork belly buns, and more. 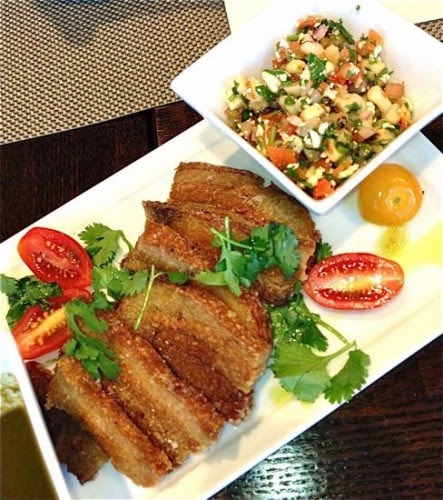 This is the one to order first: crisp chicharrone accompanied by salsa verde and street corn pico. Currently priced at $10. 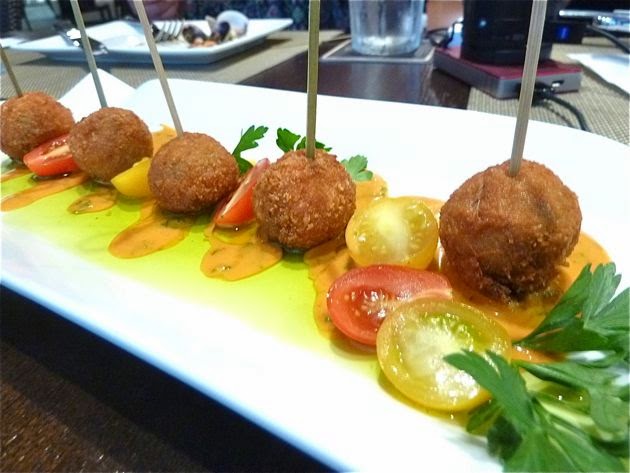 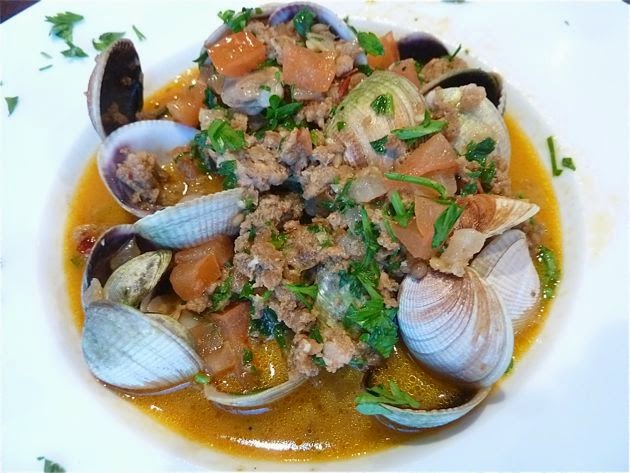 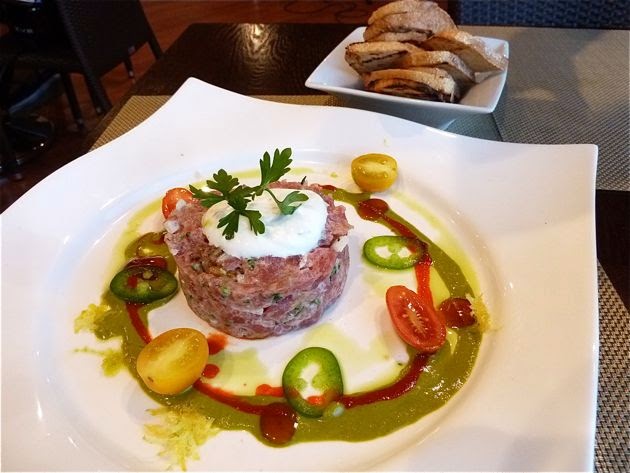 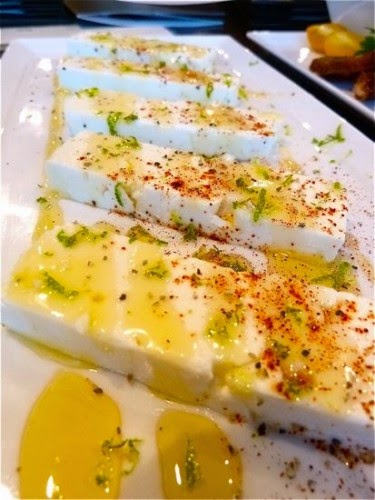 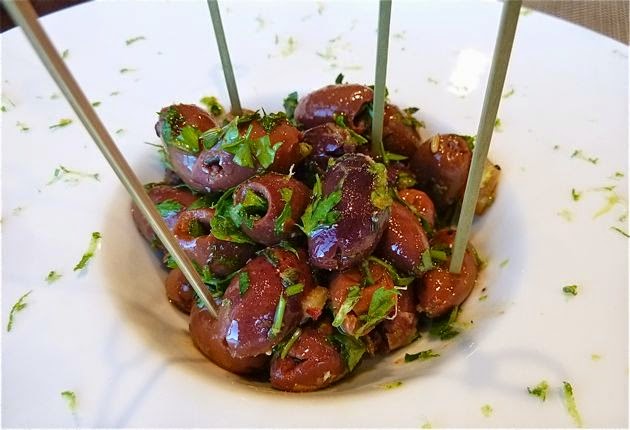 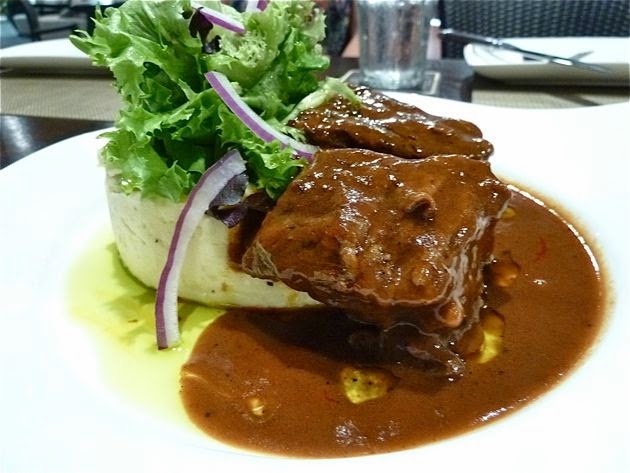 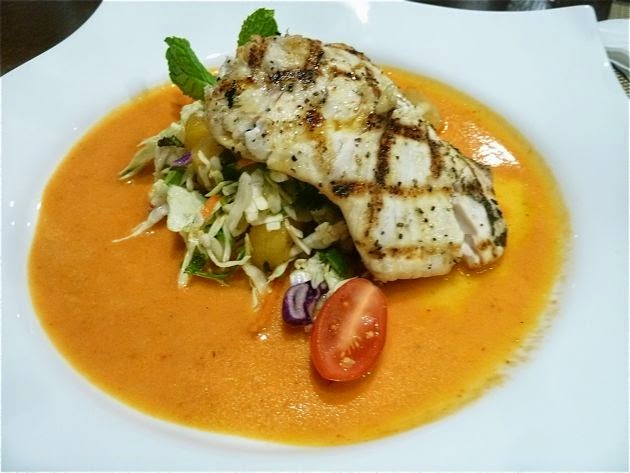 Grilled fish served atop fire-roasted apple slaw.
———
Nadine Kam is Style Editor and staff restaurant critic at the Honolulu Star-Advertiser; her coverage in print on Wednesdays and Thursdays. Contact her via email at nkam@staradvertiser.com and follow her on Twitter, Instagram and Rebel Mouse.
Posted by Nadine Kam at 7:54 PM