Chris Kajioka pops in at MW 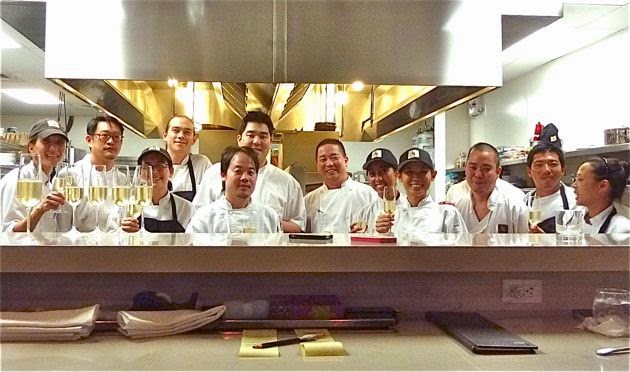 Perhaps he’s been in the cave too long, because Chris Kajioka’s seems to be making the most the light these days, popping up in kitchens of friends.

In April, word came that the chef would be leaving Vintage Cave by summer’s end. His last day there is July 31, and his next project involves working with Aziza’s Mourad Lahlou in opening a restaurant here, and for now, he’s easing out of tidy Vintage Cave style by helping other chefs, such as Anthony Yang during the weekend’s Ante Meridian brunch in Manoa, and creating more earthy fare with a hint of Moroccan inspiration during a series of Tuesday collaboration dinners at Wade Ueoka and Michelle Karr-Ueoka’s MW restaurant.

Here’s a look at what was on the menu at MW on July 8. It was very affordable, considering all you get, at $50 per person, with an additional $30 for wine pairings.

A rule of thumb for those of us who eat vast quantities of food is, don’t eat the bread so we can enjoy more of the good stuff. But that’s just a reference to average bread. Chris Sy’s bread is irresistible and easily qualifies as “the good stuff,” so we ended up with double orders of bread and left very full. 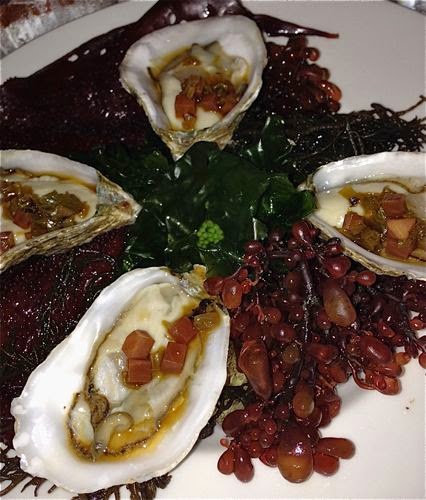 Starting bites are important in setting the tone for the evening, and we were delighted by these oysters and lavosh, below, topped with smoked onion dip and the burst of salt from ikura. 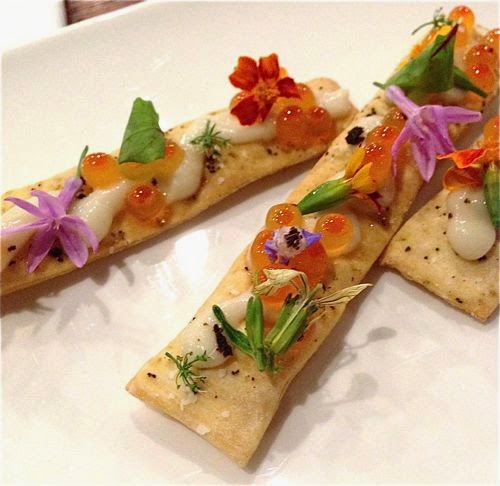 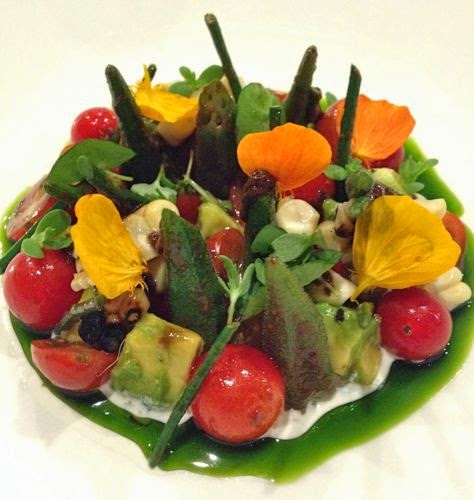 A medley of cooked and raw veggies including okra, tomatoes, avocado and sea beans. 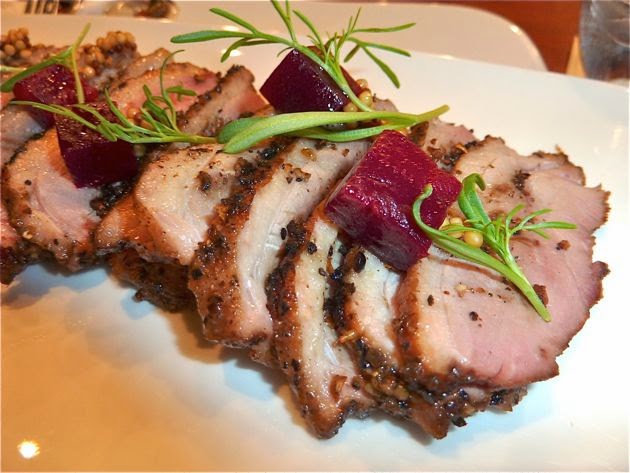 This duck pastrami was fantastic, served with Chris Sy bread. 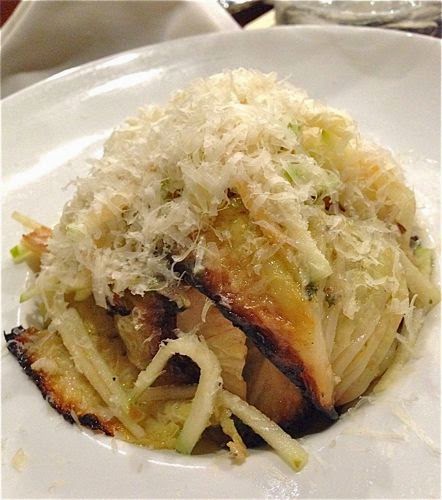 Roasted cabbage with anchovy, apple and Parmesan. Kajioka really knows how to elevate the humble cabbage. His cabbage dishes are always among my favorites at Vintage Cave, along with the caviar-topped brioche. 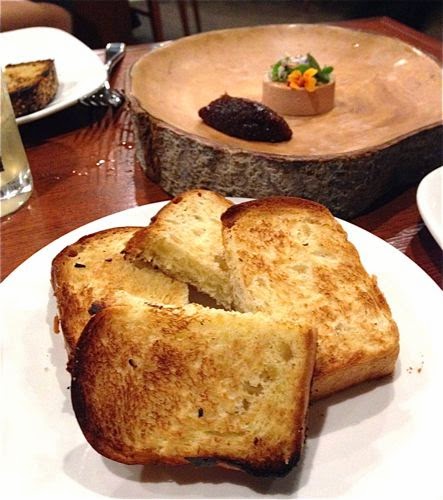 We could not get enough of this toasted ginger brioche presented with foie gras and fig jam, in the background, and below. This was a $20 add-on. 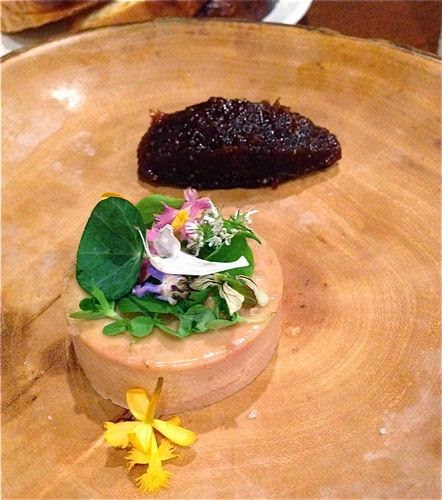 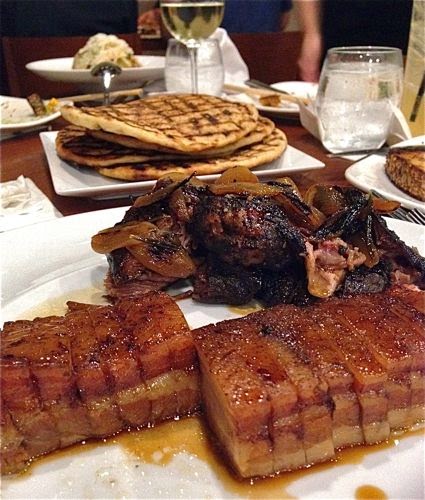 Then the meat arrived. In the foreground glazed pork belly with apple and verjus, and lamb shoulder with honey and shallot. 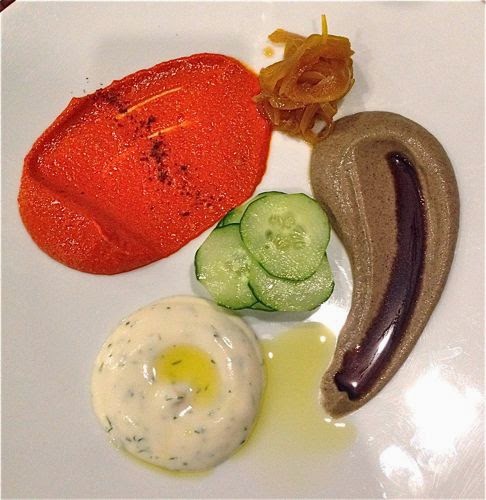 The meat was intended to be folded into flatbread and dressed with these condiments to our liking: clockwise from top left, picquillo almond spread, pickled onion, eggplant balsamic, cauliflower yogurt dill and marinated cucumbers, There was also Moroccan harissa sauce. I couldn’t get enough of the picquillo and eggplant. 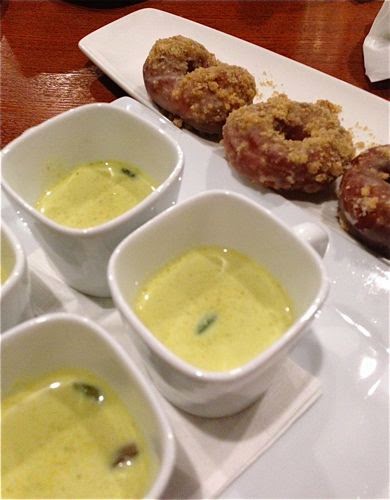 For the finale there were donuts with brown butter and medjool dates, served with pistachio sauce.
———
Nadine Kam is Style Editor and staff restaurant critic at the Honolulu Star-Advertiser; her coverage in print on Wednesdays and Thursdays. Contact her via email at nkam@staradvertiser.com and follow her on Twitter, Instagram and Rebel Mouse.
Posted by Nadine Kam at 6:15 PM