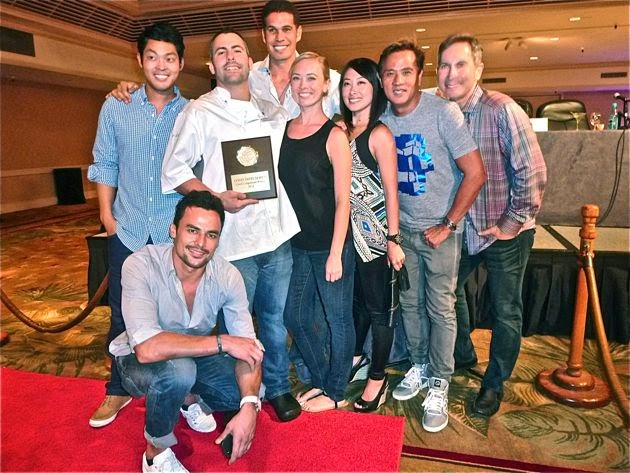 Nadine Kam photos
Gary Johnson, lead supervisor for Ka'ana Kitchen at Andaz Maui at Wailea, took top honors during the Hyatt Good Taste Series competition that took place June 27 at the Hyatt Regency Waikiki. The chef is surrounded by his admirers after the contest.

Hyatt hotels across North America are creating some restaurant buzz by touting their chefs through “The Good Taste Series.” This “Iron Chef”-style competition (excluding executive chefs) underscores the hotel’s commitment to supporting the next generation of Hyatt culinary stars.

The Hyatt Regency Waikiki Beach Resort & Spa was host to one of 12 regional competitions on June 27, and out of seven contenders, Gary Johnson, lead supervisor of Ka’ana Kitchen at Andaz Maui at Wailea, emerged the victor for Hawaii and the Pacific Northwest. He won a $500 cash prize, plus a trip back to Maui (ha!) to represent Hawaii in the national championship taking place Nov. 4, 2014, at Andaz. I’ll be watching to see how he fares in the nantional competition in the fall.

In addition to Johnson, chefs nominated to participate in the competition were: 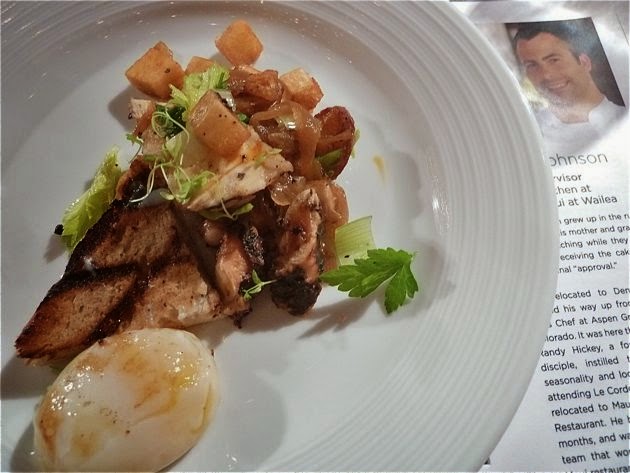 Here are two of the dishes that led to Gary Johnson's victory. At top is his tako and cassava root over toast, with onsen egg. The tender tako was especially amazing. Below, a straight-from-the-garden healthful presentation for children, using produce from Johnson's garden with opakapaka, quinoa and a lilikoi sauce. 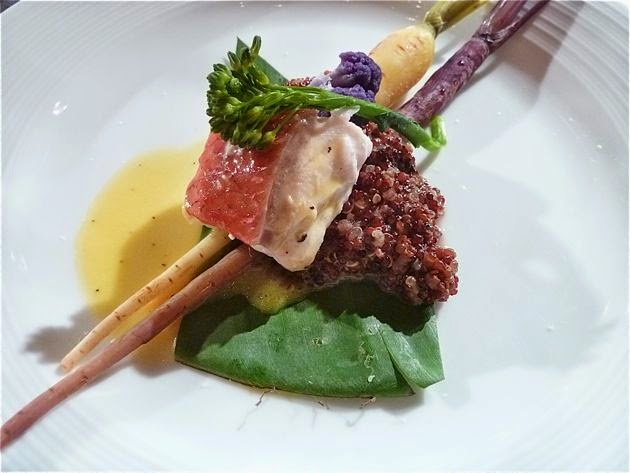 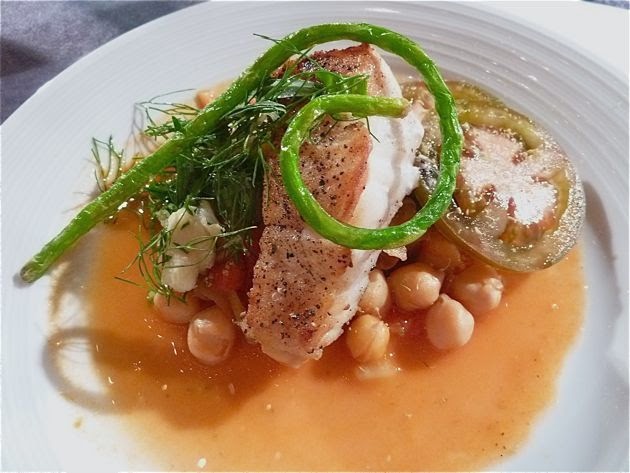 The chefs were tasked with creating three dishes for a panel of judges that including David Nadelman, Hyatt Area Vice President/Hawaii; chef Lee Anne Wong of Koko Head Cafe; Conrad Nonaka, director of the Culinary Institute of the Pacific; and a wildcard judge chosen from the audience.

The three dishes involved a creative breakfast option, a lunch offering, and a dish that would appeal to children. To the chefs’ credit, timing was tight, with delivery of dishes scheduled 5 minutes apart. They all delivered, to the second!

I was able to photograph a handful of dishes, and it was clear the chefs really had fun with the children’s challenge, with ideas parents could also use to entice their keiki to enjoy more vegetables. 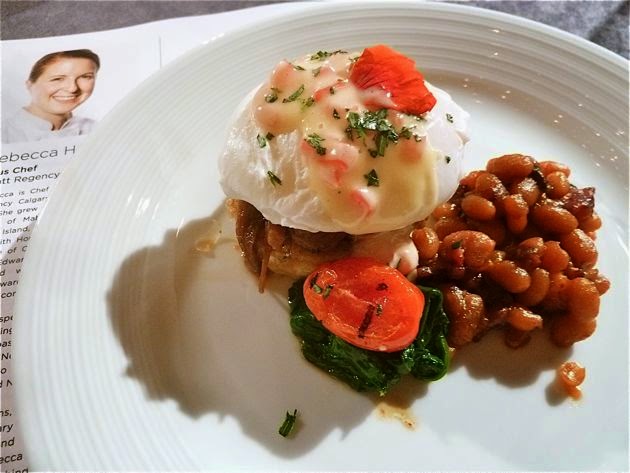 This is a tasting portion of Rebecca House's Big Bison Breakfast including egg and baked beans. 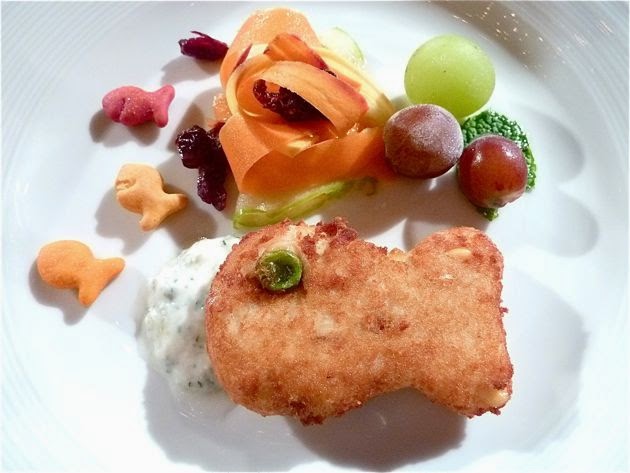 House showed a more playful side with her keiki dish, "Swimming Cakes" of potato and sweet peas, accompanied by healthier yogurt tartar sauce, apple-cranberry cole slaw, fruit and a few Goldfish crackers for good measure. Below, knowing that kids don't always finish what they eat at the table, the dish would be offered in a reusable takeout box for munching on-the-go. I have the feeling many adults would also love this! 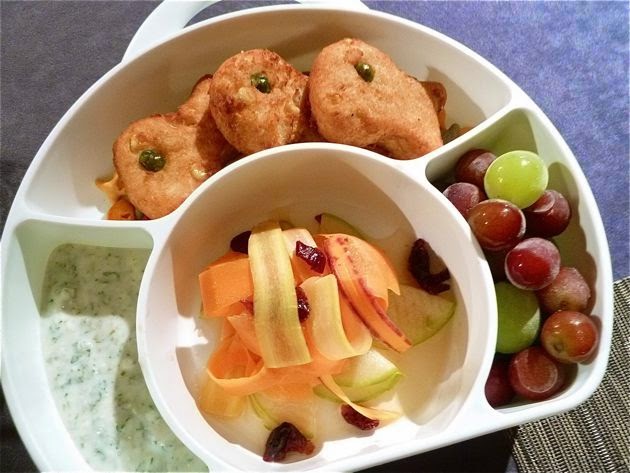 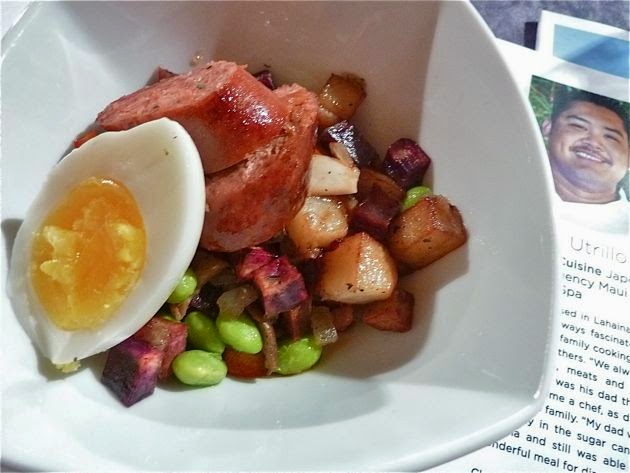 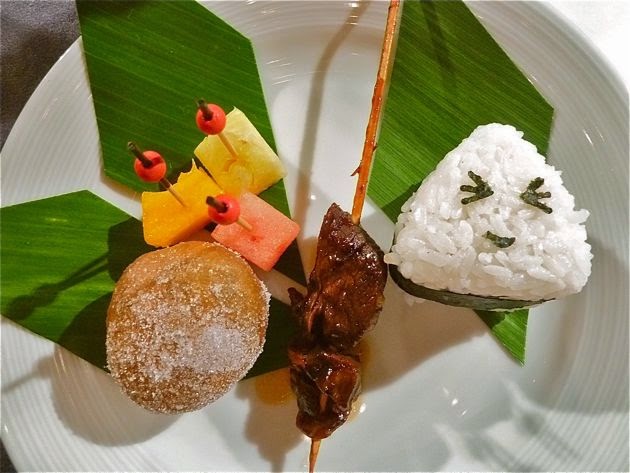 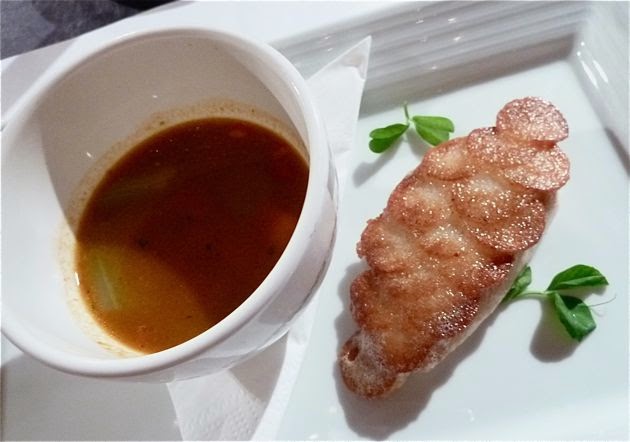 In the lunch category, the host hotel's Jon Matsubara presented opakapaka with a crisp layer of potato scales, plus Kona abalone and Kauai shrimp and an aromatic kaffir lime and chili broth. This is just a judge's tasting portion. The regular dish would be plated as below, with the broth poured at the table. Sublime. 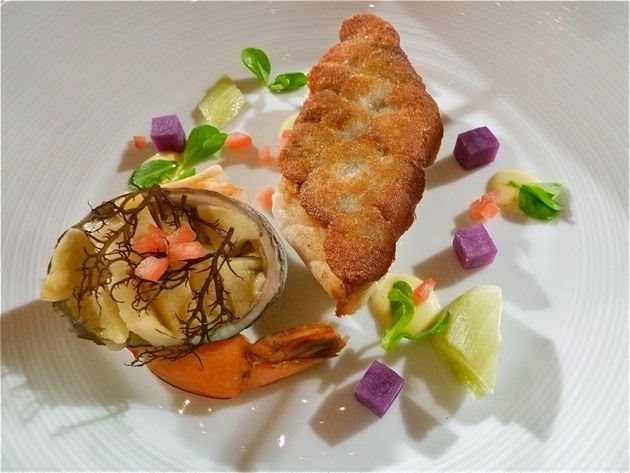 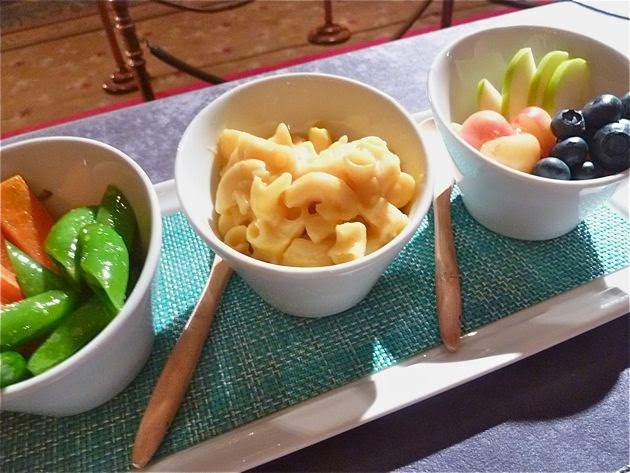 In the kids category, Jeffrey Coil offered an updated, healthier mac and cheese with quinoa pasta and butternut squash sauce, presented with bite-size finger morsels of fruit and vegetables that might appeal to kids' love of color. 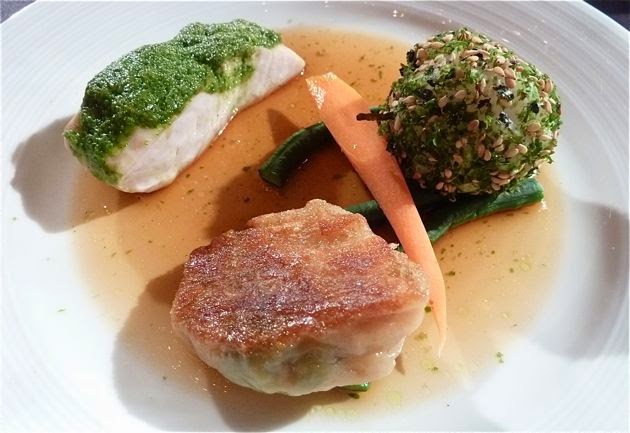 ———
Nadine Kam is Style Editor and staff restaurant critic at the Honolulu Star-Advertiser; her coverage in print on Wednesdays and Thursdays. Contact her via email at nkam@staradvertiser.com and follow her on Twitter, Instragram and Rebel Mouse.
Posted by Nadine Kam at 7:19 PM