The earlybirds got the ramen burger 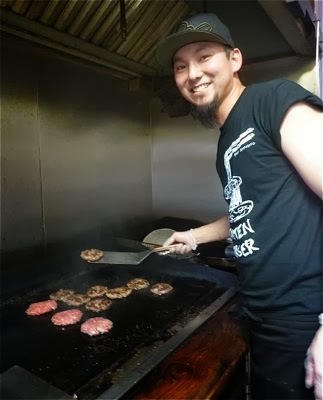 Keizo Shimamoto behind the grill at Taste Table, where he's cooking up his famous ramen burger. — Nadine Kam photos

People started lining up at 8:30 a.m. this morning for a taste of Keizo Shimamoto's famous ramen burger, which caught national attention when it debuted at Brooklyn's Smorgasburg last fall.

All of a sudden, my New York friends were emailing me stories about this new food phenom created by Shimamoto, a ramen aficionado who started his Go Ramen blog to document his tasting and cooking adventures. In fact, one of these friends just found out about the Honolulu event and reports that the ramen burger still has the longest lines at Smorgasburg, which is why she hasn't been able to try it, even though she's in a condo that overlooks the event!

Five months later, Keizo is in Honolulu, where he has family, to cook up 700 burgers for those who might never be able to travel to NYC. 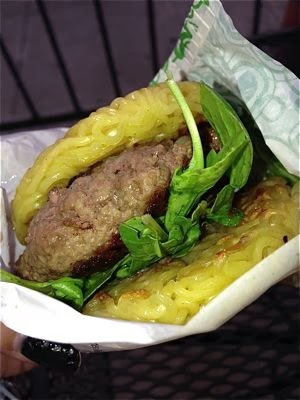 Of course, Hawaii diners (and shoppers) seem to have no problem with lines, and this one stretched around the corner from Taste Table, past Cocina, down to Ala Moana Boulevard.

Sadly, with about 400 people in line, and a three-burger per person limit, at $10 per burger—with many expressing the desire to pick up the maximum—not everyone will be able to get a bite, which is pretty much as you'd expect.

What's funny is that the first two women in line—Jean and Jane—both said they dreamed about the burger after learning about the special event, and when I asked Jane to describe her dream, she said she imagined soft cake noodles around a juicy burger, which is exactly what it is.

As an added treat, TT's Mark "Gooch" Noguchi added his own mashup of pork with gravy slaw on a ramen bun. Unfortunately, I didn't get to try this one. I was hoping to try it this morning, but after one look at the line, decided to go around the corner to Hank's Haute Dogs. 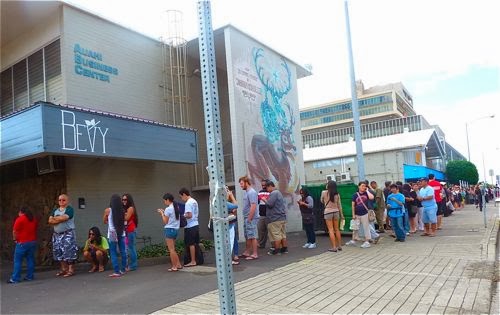 The line for the ramen burger stretches to Ala Moana Boulevard, about 400 people for 700 available burgers, and three burger limit per person. You do the math. 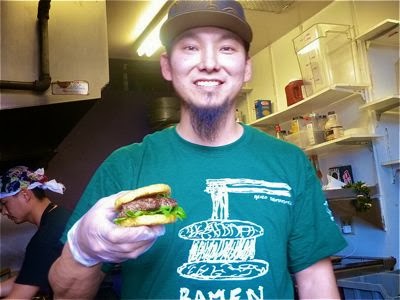 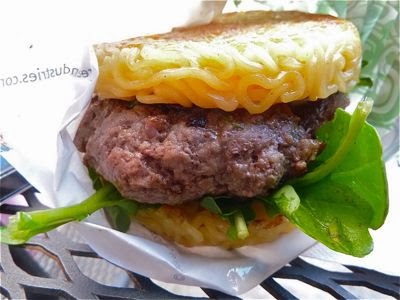 Got a chance to try the burger last night, which tastes exactly what it sounds like, hamburger between soft, toothy cake noodles. 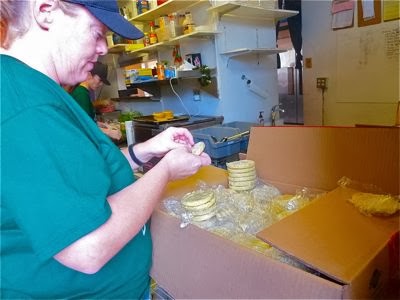