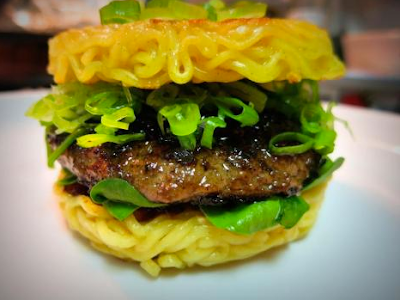 The creation of the blogger-turned-chef became an instant hit when it debuted at Brooklyn's Smorgasburg last August.

In the beginning, 300 people lined up for one of his 150 ramen burgers. These days, he can sell 700 burgers in four hours.

In a press release statement, Shimamoto said, "My grandfather was born in Hawai’i and many of my relatives from the Shimamoto family tree still live there, so it was only natural that I take the Ramen Burger to Honolulu."

Shimamoto, who's second-generation Japanese, began exploring his culinary roots by sampling ramen everywhere he went, and writing about it on his Go Ramen blog.

When the subprime mortgage crisis hit, he quit his mortgage company job and moved to Japan, where he worked at noodle shops and saw people eating a ramen sandwich with chashu pork, fueling his idea for a Japanese take on an all-American classic.