Nadine Kam photos
Diners at Nanzan GiroGiro sit around the cooking station where kaiseki meals are prepared, the menu set by the chef. In the foreground are the implements of tea including the powdered matcha served at the meal's end.

Control freaks beware. To enter Nanzan GiroGiro is to surrender to the chef and the moment.

There is no food menu to peruse. In fact, the staff would rather not share the menu, lest it spoil the surprise that accompanies any dramatic production. So, it's just as well that my visit to the kaiseki restaurant comes at the end of the month, just as the restaurant is about to unveil June's seasonal menu.

I've often spoken of dining as live theater, and Nanzan GiroGiro takes this concept to new heights. The meal starts with set "show times" with first seatings at 6 or 6:30 p.m. and second seating at 8 or 8:30 p.m. The time you choose depends on whether you're the eat-and-run type or whether you like hanging around over drinks after a meal. Staffers have stayed in place till 2 a.m. to accommodate the latter group.

There is a drink menu listing a range of sake, shochu, wine, soft drinks and teas. Once you've chosen, sit back and enjoy the performance.

Diners are seated around a large cooking and service station, so you can watch the prep when you're not wholly absorbed in the dish before you. There's precedent for this style of seating in the teppanyaki style popularized by Benihana, as well as the open-kitchen phenomenon that started in the late 1980s. But diners have rarely relinquished so much control of their meal. When I was there, one man asked for ginger to go with his ahi poke. Alas, with the kaiseki, the chef's exacting preparation, presentation and promise is that each dish is perfect as is. To veer from the chef's vision with a dash of condiments here and there would be insulting. So the man was told, in a gentle way, there was no ginger available.

Nanzan GiroGiro marks a partnership between a restaurant company and Kyoto-based ceramist. All the dishware is the work of the artist Nanzan, and a small gallery in the restaurant pays homage to his family's ceramic tradition. Many of the sake cups and dishes feature the little man, "ikan jin," or man of leisure, hanging onto the rims as a reminder to relax and hang out for a while.

Those familiar with the work of the Urasenke Foundation here might know that its home base is in Kyoto, where the ceramic tradition grew alongside Urasenke's practice of chanoyu, or the way of tea.

The ceremonial aspects of chanoyu are evident in Nanzan GiroGiro's kaiseki, which brings chanoyu's Zen principles and focus to the meal. It is the chef's task, as an artist, to express through his work the essence of the ingredients and dishes presented, and the task of diners to immerse themselves in the experience, toward fully acknowledging, understanding and appreciating the meal set before them. It's a tall order for those accustomed to talking through a meal and wolfing down food without a moment's hesitation or meditation.

Many of the sake cups and dishes are decorated with a ceramic "ikan jin," or man of leisure, created by the Kyoto-based ceramist Nanzan, a partner in the restaurant. 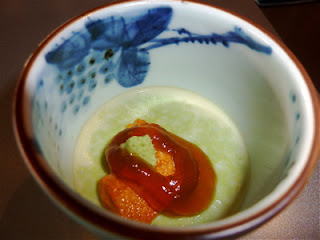 May's $50 seven-course meal started with vivid green chanwanmushi topped with a dollop of uni and shimmering brown gelee of bonito with a dot of wasabi for heat.

Next up was shredded sesame chicken presented in a small, palm-size lacquered seashell with side offerings of yellow squash, smelt in a green bean sauce and miso-chirashi sushi. Kaiseki and prix fixe meals tend to be a boon to restaurants because of small portions. Here, for example, I calculated that the entire room of about 36 was probably fed with only four chicken breasts. But the value of art can't be measured in the cost of raw materials. 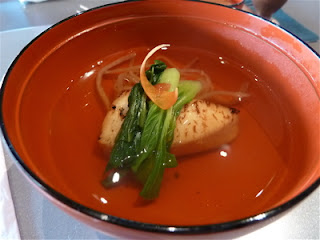 The next dish was a relaxing bowl of a single piece of monchong in ginger broth. Thin strings of daikon and baby bok choi added to the dish. Each flavor was so distinct, one could easily taste the small dot of ume floated on top of the dish. 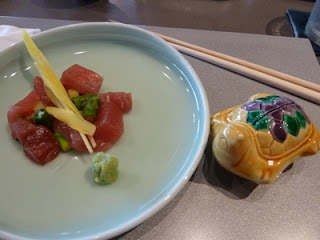 Ahi poke received a makeover with the next course. The ahi was presented plain with a side dipping sauce of shoyu with mountain potato, green onion, radish sprouts, slivered daikon and asparagus slices. When poured and mixed with the ahi, the potato, daikon and asparagus brought a delightful crunch to a usually entirely squishy dish. It was quite wonderful. 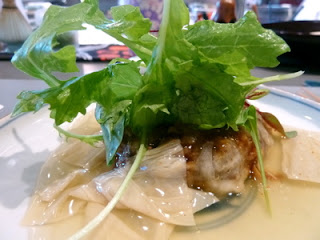 An entree of braised beef, pork and lotus root patty was one of the most substantial dishes but also my least favorite. It was engulfed with clam broth and flavorless yuba, or soy bean paper.

The next dish made up for it — delicious smoky grilled eggplant gelee in a crunchy sauce of pulverized dried shrimp of the sort used frequently in Chinese cooking, topped with okra. This was my favorite dish, so much so, I devoured it before I could take a photo. 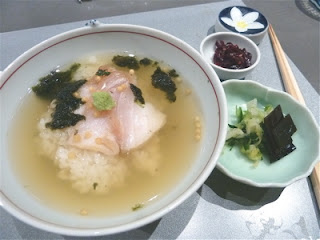 Closing the meal was a simple dish of uku, or gray snapper, chazuke with nori and pearls of micro arare. On the side was a delicious kinpira of slivered beets, and tsukemono with small squares of konbu that had been marinated in soy sauce and sake and pressed. 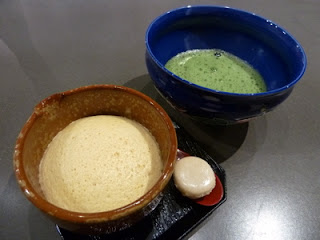 For those who need more drama at the end of the meal, dessert is an $8 add-on. May's offering was mound of lilikoi souffle accompanied by a petite almond macaron.

A finale of powdered matcha green tea sent early diners out the door on a happy note. 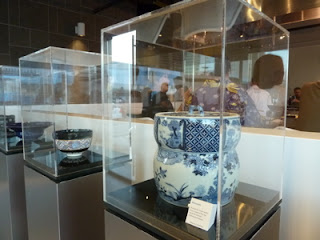 Ceramics on display.
———
Nadine Kam's restaurant reviews are conducted anonymously and paid for by the Star-Advertiser.
Posted by Nadine Kam at 11:00 AM