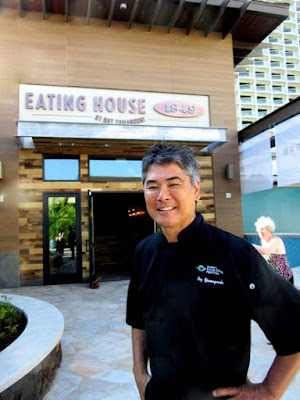 Nadine Kam photos
Chef Roy Yamaguchi was tending to business at his newest Eating House 1849 early in the morning on Aug. 25, opening day of both the International Market Place and his restaurant at the market place's third-floor Grand Lanai.

Not wanting to miss any of the action on opening day, Aug. 25, of the International Market Place, media were among the first people on the property. And chef Roy Yamaguchi was another earlybird, hovering around his newest baby, Eating House 1849, which also opened that morning.

Yamaguchi has been on a roll this year, having opened Roy's Beach House Aug. 2 at Turtle Bay Resort, with two more Eating Houses set to open in Kapolei and Maui.

It's exciting to see him break from his original Roy's Asian fusion formula and explore new territory, even if what's new is inspired by the past. With Eating House 1849, Yamaguchi goes back to the roots of Hawaii's restaurant scene to pay homage to Peter Fernandez, who opened one of Hawaii’s first restaurants in the 19th century, and called it Eating House. Fernandez used ingredients available from local farmers, ranchers, foragers and fishermen, a practice our top chefs are trying to reclaim today, after decades of seeing our palates shaped and restaurants co-opted, by sellers of convenience. The outdoor patio and bar. 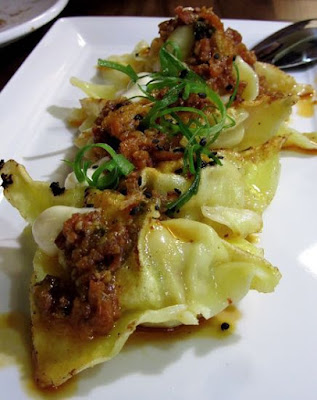 The pork and shrimp gyoza with garlic aioli and spicy XO sauce were so good, we ended up ordering up a second serving because one per person just isn't enough.

Yamaguchi explained that the first food purveyors were likely the equivalent of today's bed and breakfasts, where people seeking room and board were fed simple meals. Entrepreneurs like Fernandez offered an alternative.

Of course, this being Roy, don't expect your great, great, great grandfather's chicken hekka or Porgtuguese bean soup. Though rooted in our plantation heritage and the chef's taste memories of his grandfather's cooking, dishes are thoroughly contemporary to suit today's more adventurous, sophisticated palate.

Something like Eating House 1849's "Huli Huli" kim chee pork belly, with its combo of pork belly laced with go chu jang and miso aioli, and draped with kim chee would probably have made your ancestors' heads spin and their eyes pop out of their sockets. The audacity! The explosion of flavors! But for us descendants, it is oh so good.
—————
Eating House 1849 by Roy Yamaguchi is on the third floor Grand Lana at International Market Place, Waikiki. Open daily from 11 a.m. to 3 p.m. for lunch and 5 to 10 p.m. for dinner. Call 924-1849. 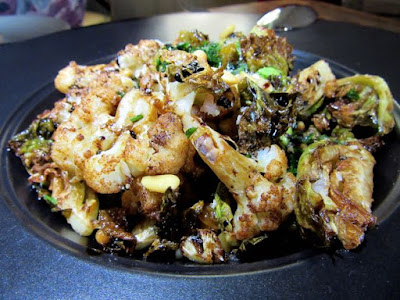 Most people don't think or vegetables like cauliflower and Brussels sprouts as an adequate pupu, but these are fried with toasted pine nuts, Golden raisins and tossed with balsamic vinegar to become the appetizer of your dreams. 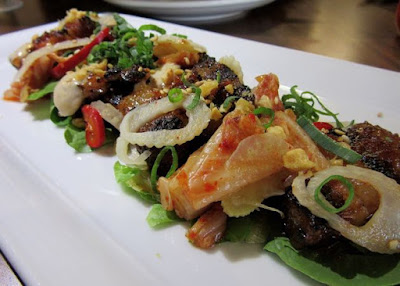 After doubling up on the gyoza, it was really tempting to do the same with "Huli Huli" pork belly. This dish with go chu jang, miso aioli, kim chee and green onions amounted to a party in the mouth, in a good way, without trashing the premises. Flavors were balanced and got on well together. So awesome! Hawaii's Portuguese heritage is celebrated with this dish of Manila clam and Hawaiian tako cataplana with housemade linguica. The mild tomato sauce left something to be desired, as did the sweet bread, though I get the connection. With more Italian restaurants out there, people just assume red sauce = garlic bread. 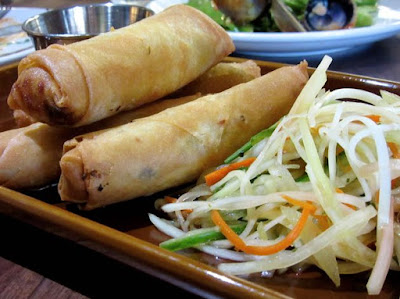 Sometimes sequence is everything. After the pork belly, Lola's pork adobo lumpia seemed rather staid; served with a small green papaya salad and sambal tomato that wasn't particularly memorable. 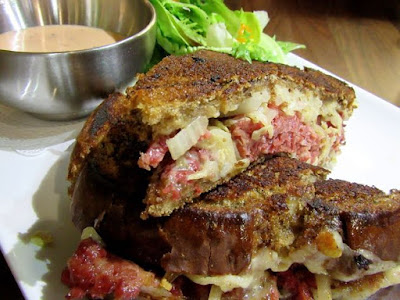 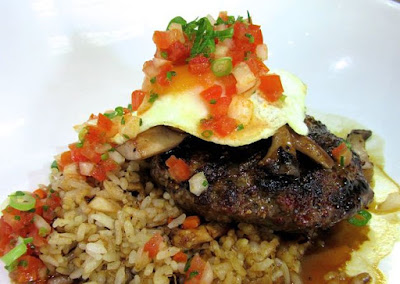 It's not local without a loco moco, and the Hawaii Ranchers beef patty with Hawaiian mushroom gravy makes this one outstanding. So juicy! 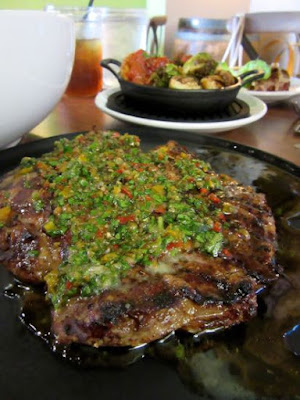 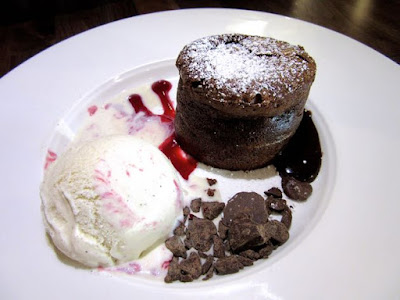 Dessert of molten lava cake and vanilla bean ice cream will make you appreciate the evolution of restaurants since the days of the original Eating House.

—————
Nadine Kam is Style Editor and staff restaurant critic at the Honolulu Star-Advertiser; her food coverage is in print in Wednesday's Crave section. Contact her via email at nkam@staradvertiser.com and follow her on Twitter, Instagram and Rebel Mouse.
Posted by Nadine Kam at 7:59 PM