'Hawaiian' pizza gets a reboot at Sophie's 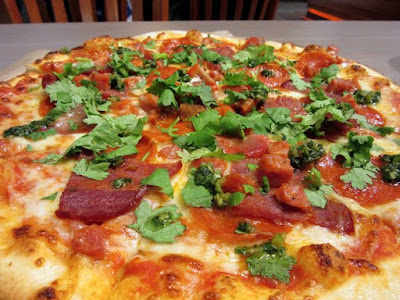 Nadine Kam photos
The Hawaii Pie-0 pizza at Sophie's Gourmet Hawaiian Pizzeria in Koko Marina Shopping Center is closer to what a Hawaiian pizza should be than the pineapple-ham combo that has carried the name for nearly 60 years. The local equivalent to a meat lover’s pizza, it features mild Sriracha red sauce, mozzarella, salami, pepperoni, a small dice of char siu and Portuguese sausage, fresh cilantro and dots of cilantro aioli that deliver a nice herbaceous counterpoint to the meat.

For nearly 60 years we've lived with the Canadian invention known as "Hawaiian pizza." You can read more about it here: villagevoice.com/restaurants/do-hawaiians-eat-hawaiian-pizza-plus-a-little-history-6556091

OK, so the pineapple part might be considered Hawaiian, but the combination of pineapple and ham doesn't pop up much here unless you're thinking holiday ham with a pineapple glaze.

People here become irate when outsiders mess with our poke, yet we have lived with this so-called Hawaiian pizza for decades, accepting it as just one of those bizarre facts of life that always was and will forever be.

It's amazing to me, however, that in the whole course of Hawaii's culinary evolution and all the makeovers and reinvention of dishes, that it's only now that someone has turned attention on what a true Hawaiian pizza might be.

Over at Sophie's Gourmet Hawaiian Pizza, conceived as a build-your-own pizza joint, John Kim has also created a handful of house pizzas bearing delicious combinations of flavors inspired by our culinary diversity. What's more, all the ingredients used, from Italian-imported 00 flour, to Roma tomato sauce, to toppings, are all top notch. For the quality, you'd expect the pizzas to cost $20 or so, but the house pizzas are $12.95 ... for now at least.

He's working on getting a liquor license. Until then, it's BYOB. Sophie's is in the Koko Marina Shopping Center. Call 892-4121.

My full review is in the paper today, but here's a look at some of the selections. Apparently, I was so excited to start eating, I failed to take a picture of the Seoul Mate pizza that inspired the operation, when Kim, excited by the Korean bulgogi taco craze, wondered why no one else had put bulgogi on a pizza. Awesome stuff, and he recommends having it folded, calzone-style, for meat and oozy cheese in every bite: 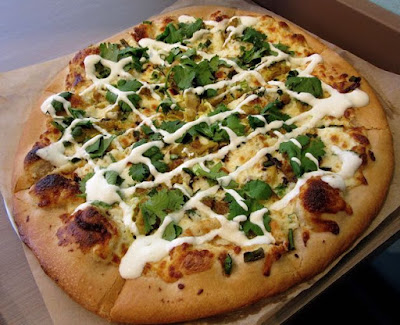 I would like to say I have a favorite, but each one always seems better than the last. This is the Thai-dal Wave, with a laayer of macadamia nut cream sauce topped with Thai curry chicken infused with lemongrass and garlic, with jalapeños, cilantro and green onions, finished with a coconut drizzle. 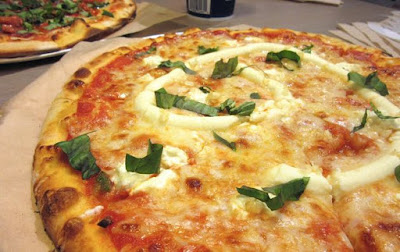 This cheese pizza was a recent special, topped with mozzarella, fontina, Parmesan and goat cheese with a touch of basil. They were testing the combo, but even if it doesn't become a permanent addition to the menu, you could go the build-it-yourself route. 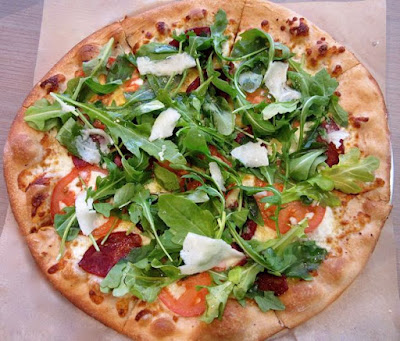 I thought the Sophie’sticated pizza was too basic to be interesting, but the combination of salami and arugula form a perfect union.

Email ThisBlogThis!Share to TwitterShare to FacebookShare to Pinterest
Labels: pizza