Blessings on the table at Taste of Taiwan 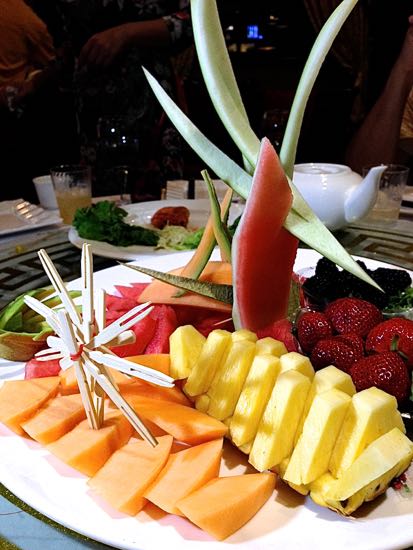 Nadine Kam photos
A "Tray of Togetherness," assorted fresh fruit, captured the spirit of the "Taste of Taiwan" friendship dinner that brought Taiwanese and local Chinese together at the table.

Can you build friendships through food? That is question and the driving philosophy behind the United Chinese Society's Hawaii-sponsored "Taste of Taiwan" that took place Aug. 22 at Jade Dynasty restaurant.

From what I saw, yes you can. If not through food itself and the cooperation behind the scenes that goes into feeding hundreds, then through the camaraderie of sitting through a five-hour, 12-course meal. In between courses, there was also a lively bit of alcohol-fueled karaoke, for a good cause as friends challenged friends to step up to the mic in exchange for $100-plus donations to UCS. 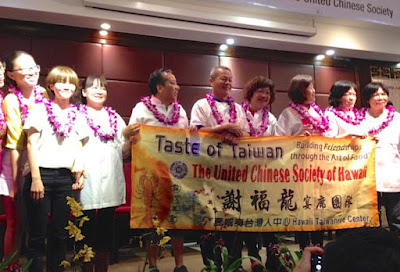 The Taiwan chefs and crew took their bows following the dinner.

On the menu were homestyle comfort dishes from southern Taiwan, "not restaurant dishes," our hosts made clear. Many dishes looked familiar to anyone versed in local Chinese cuisine, but flavors were not. You don't often find cinnamon, and never find basil stirred into dishes at our Cantonese or Hong Kong style restaurants.

The one thing these cuisines do have in common is that the major ingredients have meanings tied to blessings and prosperity, and dishes presented were intended to bestow all guests with good wishes and abundance, and they sent us all home with a small planter of lucky bamboo.

Co-sponsoring the event were the Taipei Economic and Cultural Office in Honolulu, the Hawaii Taiwanese Center, China Airlines, Lucoral Museum and Jade Dynasty. 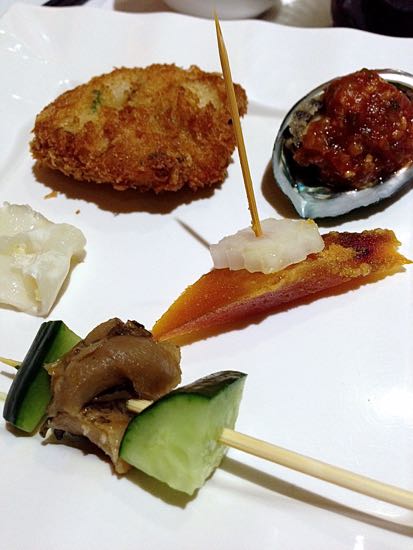 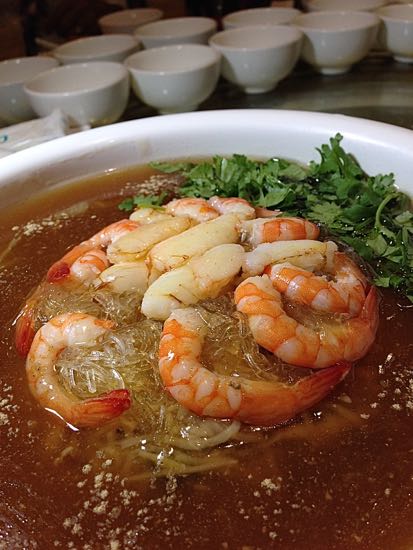 Auspicious soup consists of crab meat, shrimp, ham and mushrooms. The Chinese word for crab and harmony are pronounced “xie.” Therefore, the dish reinforces the desire for peace. Shrimp represents liveliness, and mushrooms represent longevity and ability to sieze opportunities. 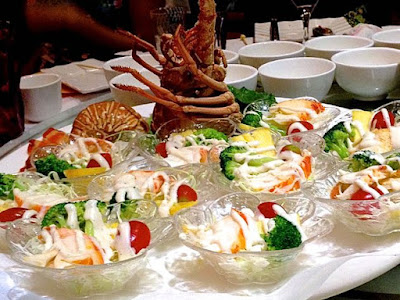 Lobster is known as the “dragon of the sea” and it represents strength, energy and good fortune. It was served chilled in these individual portions of salad. 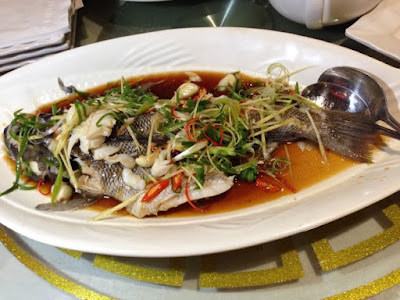 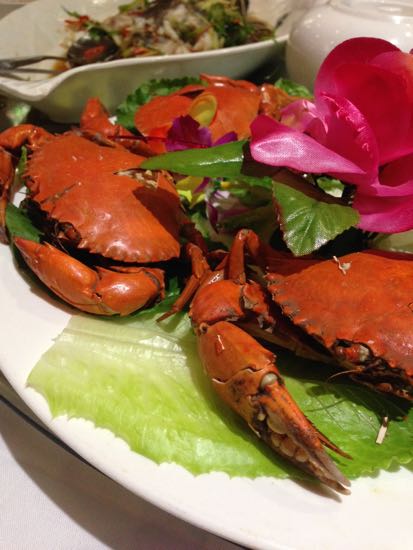 Taiwan virgin, or juvenile, crabs were steamed, then cut in two to expose their insides and supposedly make them easier to eat. No having to lift the carapace. It was not as messy as our way, but I found it a little unappetizing because I thought of horror movies in which people are sliced in two. 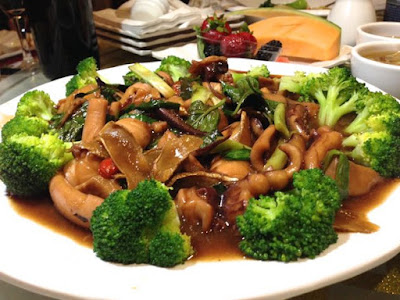 Cuttlefish was stir-fried with sesame oil, basil and mushrooms, and served with broccoli. 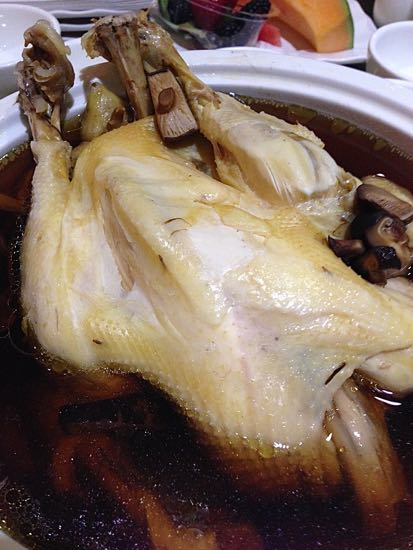 A whole chicken went into this "Happy Family Chicken" soup with mushrooms representing longevity and seizing opportunities. The chicken represents prosperity, joy and togetherness of the family. Sweetened with antioxidant red dates and goji berries, it's also a home remedy for colds. 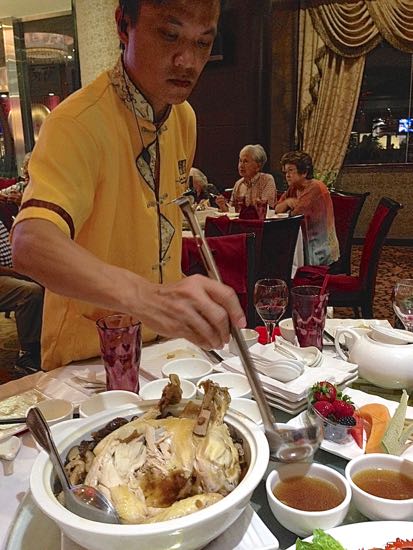 Serving the chicken and mushroom soup. 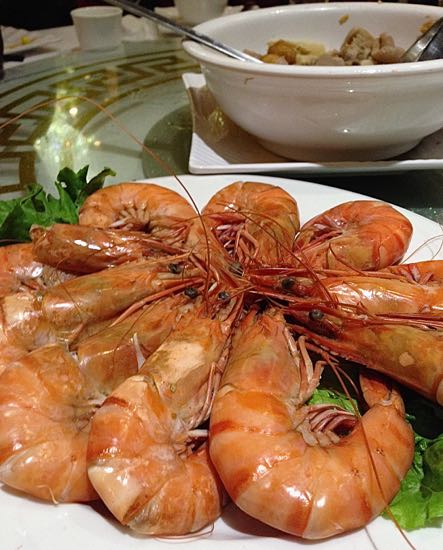 Aniseed and angelica were among the medicinal seeds and herbs that went into this dish of herbal shrimp, along with sorghum liquor and shaoxing rice wine. The flavor was light, but complex, not at all the basic salt/pepper shrimp offered at most Hawaii Chinese restaurants. I also detected a celery/celeriac component. 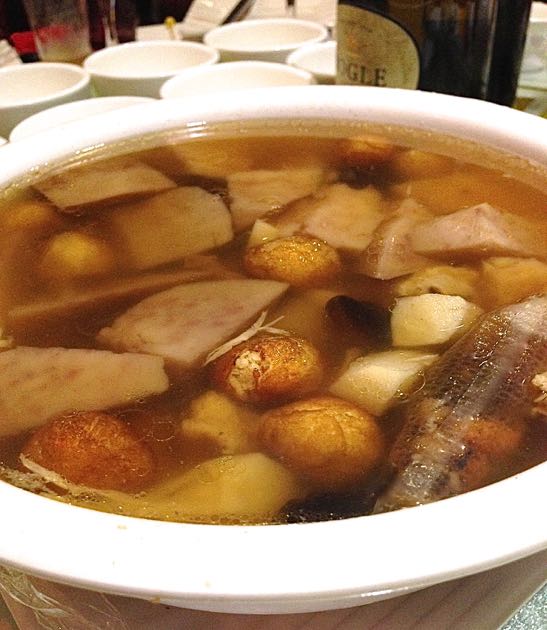 We were most curious about the dish called "Buddha Jumps Over the Wall," a seafood and poultry casserole said to be so good that smelling it would have Buddha beating a path to your door, and have vegetarian monks convert to eating meat. It is traditionally made with 30 ingredients, including controversial shark fin. This one featured dried scallops, crab meat, shrimp, ham and mushrooms. But the soup is the best part, spiced with star anise and cinnamon. 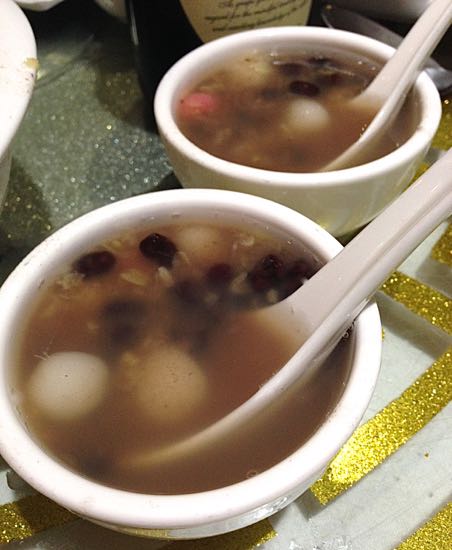 The finale was a "Happy Ending" traditional Taiwanese dessert of warm mung bean and rice porridge with sweet mochi dumplings.

—————
Nadine Kam is Style Editor and staff restaurant critic at the Honolulu Star-Advertiser; her food coverage is in print in Wednesday's Crave section. Contact her via email at nkam@staradvertiser.com and follow her on Twitter, Instagram and Rebel Mouse.
Posted by Nadine Kam at 10:03 PM