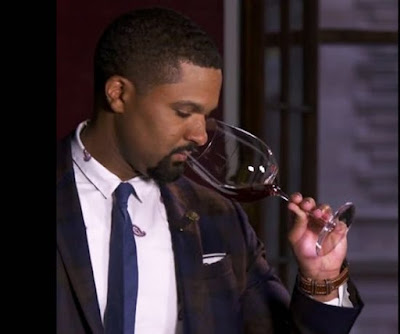 Samuel Goldwyn films photo
Dylnn Proctor, featured here in the documentary film “Somm,” is Penfolds Winemaking Ambassador, and offered a history of the company and its winemaking processes during a Penfolds dinner at Azure restaurant.

Proctor, named “Best New Sommelier in America” by Wine & Spirits Magazine in 2008, is Penfolds Winemaking Ambassador, Americas, and was featured in the 2012 documentary “Somm,” which followed four men through the labyrinth exams of the Court of Master Sommeliers and the grueling Master Sommelier Exam, a test with one of the lowest pass rates in the world. Since its inception in 1969, fewer than 200 candidates have been named Masters. 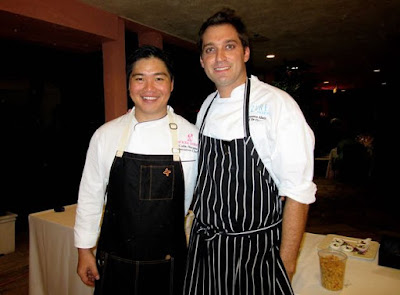 One of the most extravagant wines poured over the course of the evening was Penfolds Bin 707 Cabernet Sauvignon 2012, which Fujioka’s Wine recently offered at $341.99. The Grange wine is a result of the late Max Schubert’s experiments in the 1950s and ’60s to create a wine in the style of Bordeaux, using the shiraz or syrah abundant in Australia, and a small amount of cabernet. The Bin 707 was named after the Boeing 707 aircraft which linked Sydney to California, a sister in wine production.

It was an evening well spent, both delicious and educational. A lot of effort went into the meal and when told I enjoyed the saturated essence of duck captured in the duck prosciutto, chef Alwin shared that he had two more ducks maturing, part of the lengthy process. He shared that he’s not a patient person except when it comes to the kitchen arts. 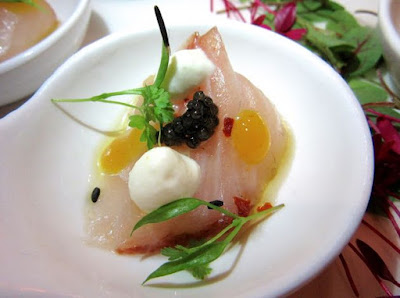 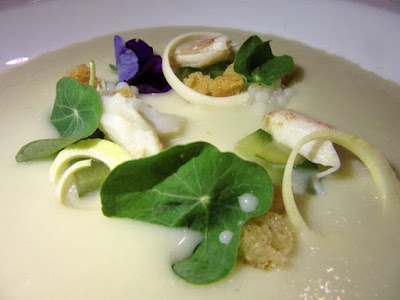 Apple pear gazpacho was poured over Wailea hearts of palm panna cotta, escargot caviar relish, compressed Ho Farms cucumber, kaffir croutons and morsels of Dungeness crab. I was two-thirds pau when I was distracted and a waiter took away my plate. Bummer. I really wanted to finish this. I loved the lightness, multi-layers and beautiful textures. Paired with Penfolds Bin 51 Riesling. 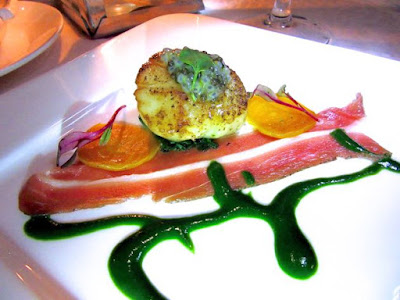 A seared Hokkaido scallop and duck prosciutto were on the menu at Azure’s Penfolds dinner. Also on the plate: roasted baby beets and basil-caviar dressing. Presented with Penfolds Bin 311 Chardonnay. 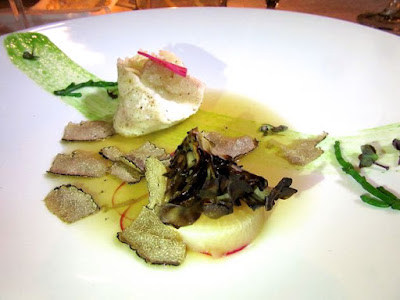 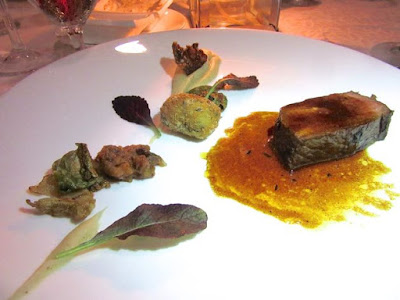 An autumnal offering of wagyu striploin, marrow Dauphine, sunchoke fondue and persimmon mostarda, made even more memorable when served with Penfolds Bin 707, a 2012 cabernet sauvignon. 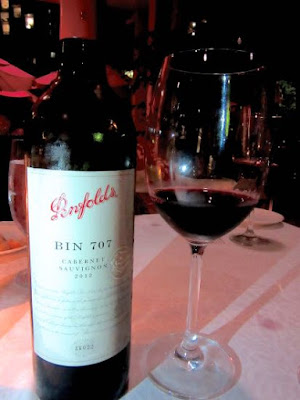 The Penfolds Bin 707 is available at Fujioka's Wine, Times at Market City Shopping Center, for about $342. Note that the two chefs have more holiday feasts planned on Christmas Eve and Christmas Day.

Seating is available between 5:30 and 9 p.m.; and the cost of the dinner is $150 per person, or $195 with wine pairings. Prices do not include tax and gratuity.

For keiki, a three-course children’s menu will start with seasonal fruit; entrée of a grilled steak or fish with rice and green salad, or roast turkey with mashed potatoes and herb gravy; concluding with a dessert of Waialua chocolate flourless cake with vanilla gelato and raspberry sauce. The meal is $45 for children between ages 5 and 12.

On Christmas Day, Hazama and his team will present a lavish brunch buffet in the hotel’s Monarch Room, with everything from pastries from the “Only at the Royal” Bakeshop, to a build-your-own eggs benedicts station, chilled seafood offerings, local greens, and “Pink Palace” pancakes. A variety of carving and action stations will also be open, offering a range of delectables such as sushi and Shinsato Farms suckling pig from snout to tail.

Seating times for the Christmas Day Brunch are at 9:30 and 11:30 a.m. The price is $110 per person and $55 for ages 5 to 12. Prices do not include tax and gratuity. To make reservations for Christmas Eve dinner, Christmas brunch and Christmas dinner at The Royal Hawaiian, call the Starwood Waikiki Dining Desk at (808) 921-4600.
—————
Nadine Kam is Style Editor and staff restaurant critic at the Honolulu Star-Advertiser; her coverage is in print on Wednesdays and Thursdays. Contact her via email at nkam@staradvertiser.com and follow her on Twitter, Instagram and Rebel Mouse.
Posted by Nadine Kam at 5:01 PM