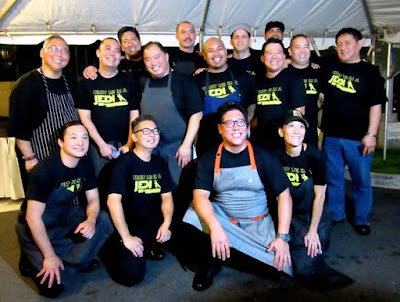 “Star Wars” imagery is everywhere this season in anticipation of this week’s release of the latest tale in the film saga, “Star Wars: The Force Awakens.”

Even so, when I spotted the Jedi T-shirts and life-size Storm Trooper balloon outside the tents at the MW and Friends “Reunited” event that took place Dec. 14 under a tent in the restaurant’s parking lot, I was a little confused about the meaning of the thing.

OK, first things first. As well as being praise-worthy in their own right, chefs Alan Wong, Roy Yamaguchi and George Mavrothalassitis have been responsible for providing the real world training ground for most of Hawaii’s next generation of top-tier chefs. This particular reunion brought together chefs who formerly worked together at Alan Wong’s Restaurant and the Pineapple Room. 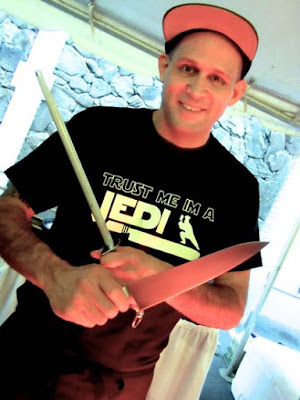 Jedi chef Steven Ariel, now with the W Seattle Hotel, was among the alumni of Alan Wong's family of restaurants who came together for a reunion event Dec. 14 at MW Restaurant.

In addition to MW host/owners Wade Ueoka and Michelle Karr-Ueoka, in house were: 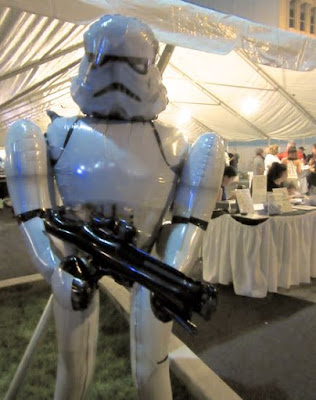 As for the “Star Wars” reference, Wade explained all in his program notes, writing:

“I remember long, long ago, in a kitchen not too far away …
The day I was new to the fish station … I had actually just learned to cook a simple fish fillet, and now, all of a sudden, as service was starting, I was responsible for a whole fish? I had no idea what I was in for. Being it was my first encounter with a whole fish (and nervous as hell), I nonchalantly asked,

“The reply I received in the heat of the rush was, ‘Use your Jedi sense!’ 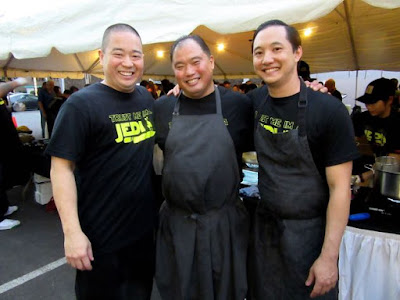 Jedi chefs, from left, Wade Ueoka, Lance Kosaka and Jonathan Mizukami, who has returned home after working kitchens from Alinea, to Per Se, El Bulli and The French Laundry. Planning for the reunion event began about five months ago.

“… Through years of battle, and the opportunity to cook with hundreds of different troops, there have been those with which a group has formed. A group that has shown passion, dedication, determination, and the skills to become a true Jedi master. It had always been a dream of mine to bring all the Jedi back together again.”

As much fun as it may have been for them to see and cook alongside one another once again, it was just as thrilling for guests who enjoyed a lengthy grazing menu. 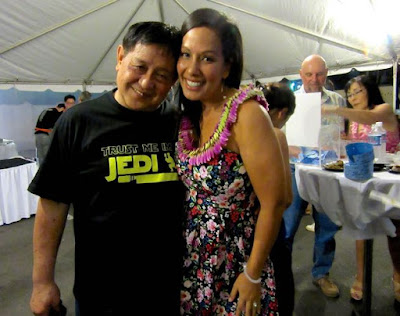 Charly Yoshida and Olena Heu were among the first employees at Alan Wong’s Restaurant. Heu continued working at the restaurant even after she took on full-time news duties at KHON.

Former front-of-the-house staffers were also there to check in with old friends and simply enjoy themselves. Among them was former KHON morning news anchor Olena Heu, who served as hostess when Wong opened his first eponymous restaurant in April 1995.

She had arrived from Kauai and was working at David Paul’s Lahaina Grill. When that restaurant was put up for sale, she simply decided she wanted to work at Hawaii’s No. 1 restaurant and rang them up.

She put in 10 years while attending school, and it was only after taking on an internship at KHON that she decided TV news was the place for her. Yet, even after landing a full-time job with the station, she continued to work at Alan Wong’s restaurant until she could no longer do so after taking the morning anchor job that required getting up at 2 in the morning.

“The restaurant shift didn’t end until midnight,” she said. “But they still let me come in and work one day a week. Everytime I see Alan I tell him I loved the time I spent working at his restaurant.”

As for the man who saw the promise in all of them, he is in Shanghai, preparing to open his next restaurant. 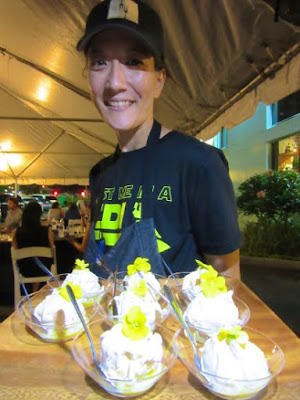 Michelle Karr-Ueoka shows a tray of her lemon meringue confections. 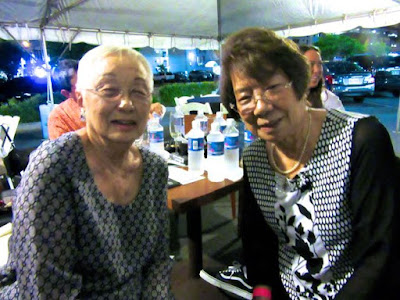 The Jedi moms, Marge Kosaka, left, mother of Lance, and Alan Wong's mom Terry Yamamoto, who's said to be a very good cook. She said she didn't teach him to cook, but through eating her food, he learned the optimal flavors. She said she's proud of all of her son's protégés, who still refer to her as "mama."

Some of the dishes: 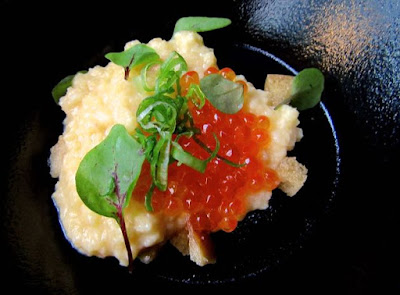 Jon Matsubara offered up a taste of his new menu at Bloomingdale's Kaola Restaurant, with "Hibiscus Egg," creamy "fu yung" topped with a dollop of ikura and scallions. 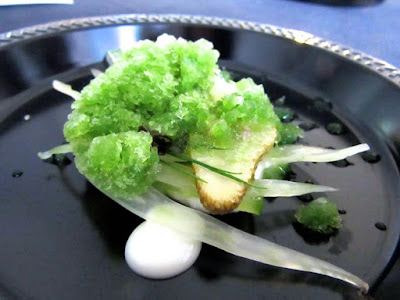 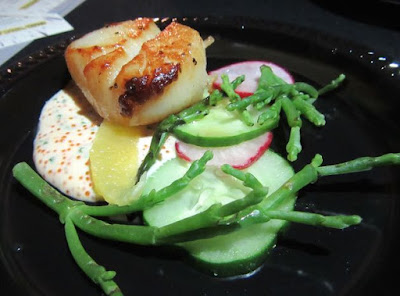 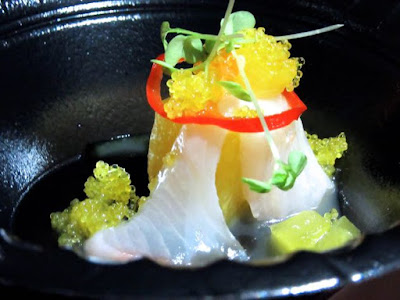 Marc Urquidi of Roy's presented Kona kampachi crudo with citrus flavor derived from being wrapped around a cube of compressed Hawaiian Crown pineapple and yuzu fluid gel, with the heat of jalapeño. 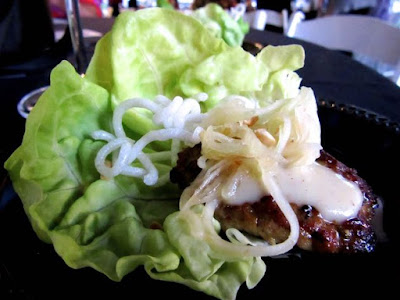 The flavors of Thailand came through in Sean Walsh’s pork sausage lettuce wrap with coconut curry sauce, a touch of green papaya salad and crispy noodles. 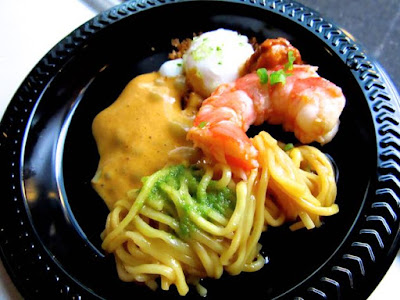 Sonny Acosta put a party on a plate with a combo of Kauai shrimp and Sun Noodle mazemen with shrimp head gravy, uni, achiote, whole quail egg and chicharon. 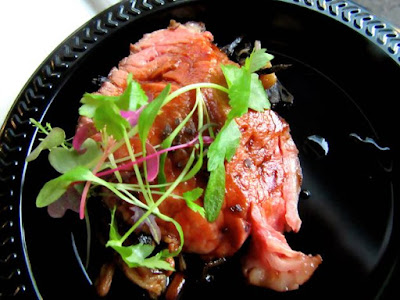 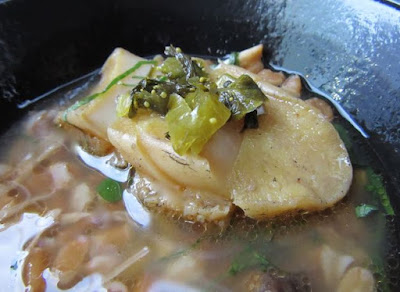 —————
Nadine Kam is Style Editor and staff restaurant critic at the Honolulu Star-Advertiser; her coverage is in print on Wednesdays and Thursdays. Contact her via email at nkam@staradvertiser.com and follow her on Twitter, Instagram and Rebel Mouse.
Posted by Nadine Kam at 4:18 PM