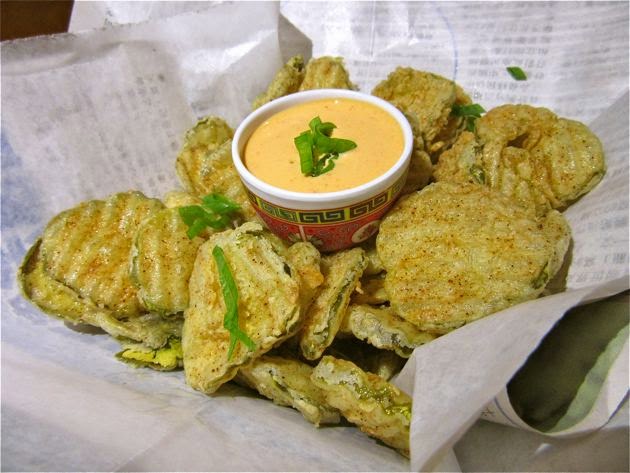 Nadine Kam photos
Bet you can’t eat just one of the flied pickles—that’s right, flied—at Wang Chung, which just launched its new pupu menu. Even though I don’t usually like pickles, I loved these sour-salty, beer drinkers' pupu.


Of course when I first learned about the karaoke bar Wang Chung, I had to wonder, “Is that named after the 1980s song?”
Don’t lie, you know the one, that goes: “Everybody have fun tonight, everybody Wang Chung tonight.”

Nobody knew what that meant then, and nobody knows what it means today, but the song is forever associated with the cheesy, party-all-the-time ethos of the time, and when it came time to name his bar, Danny Chang just thought it was a great directive to head to a physical space called Wang Chung and forged ahead, even though his friends warned him it was the stupidest name ever. 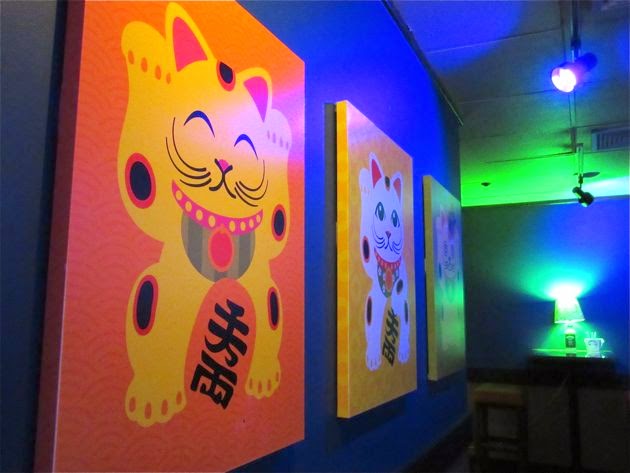 It’s a colorful place for karaoke.

Silly as it may seem, Wang Chung proves memorable and last night launched a new bar menu created by chef Randy Sanchez, fusing Mexican and Asian ingredients in just the right measure. And prices are reasonable at an average of only $5 to $7 per item, and a max of $10 for Uncle Juan Tachos, kalua pork on won ton nachos created in honor of Sanchez’s uncle, Juan Tachos.

There are some racist tones in a menu that features “flied” instead of “fried” pickles, and offers a “drinkie drinkie” menu, but I suppose being Chinese himself, Chang can get away with the tease.

Originally from San Francisco, Chang is an engineer by education, but in a state where who you know is all-important, he wasn’t able to find work in his field.

Well, engineering’s loss is our gain. Wang Chung is a colorful place with a friendly vibe, fun food and libations, with pupu beautifully served atop pages of Chinese newspaper wrapped with waxed paper that doesn’t come cheap. 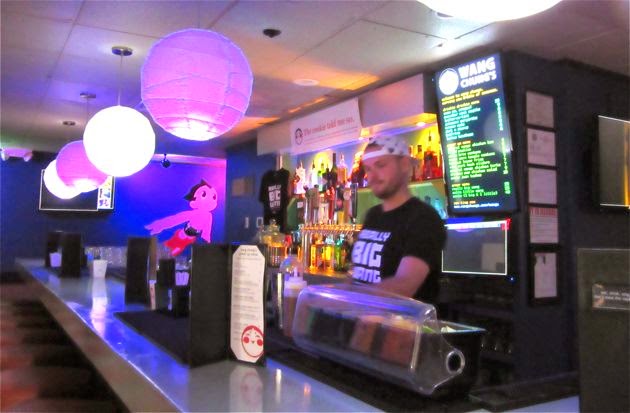 Take a seat at the bar or tables in two rooms. 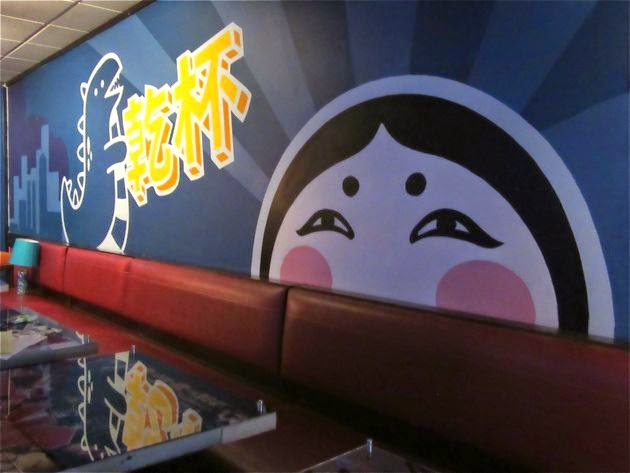 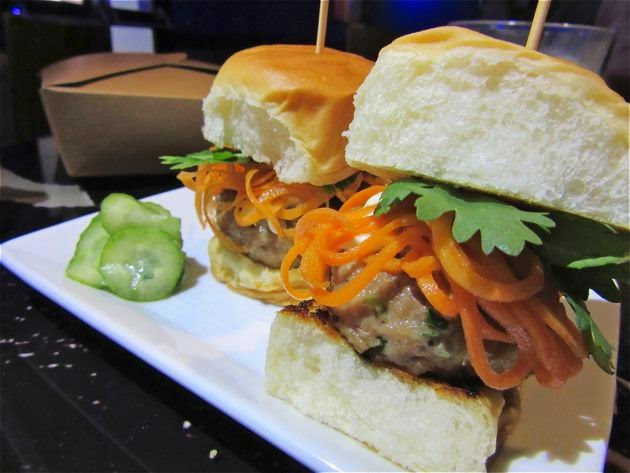 Loved the Saigon pork hash sliders, a twist on the banh mi, served on a soft sweetbread roll that doesn’t hurt the roof of your mouth the way typically stale French bread does. Also enjoyed the crunch of minced water chestnuts in the meatballs. 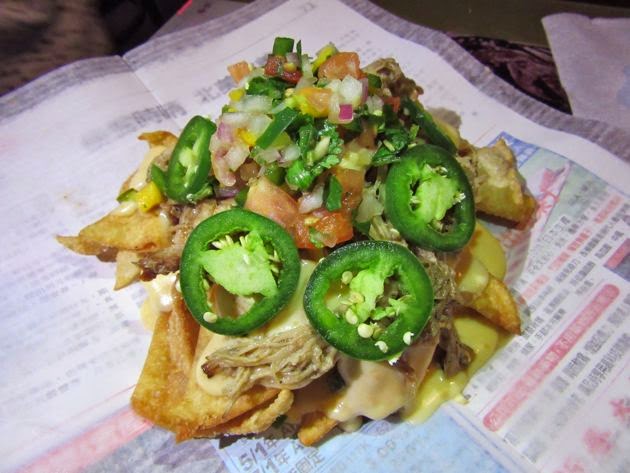 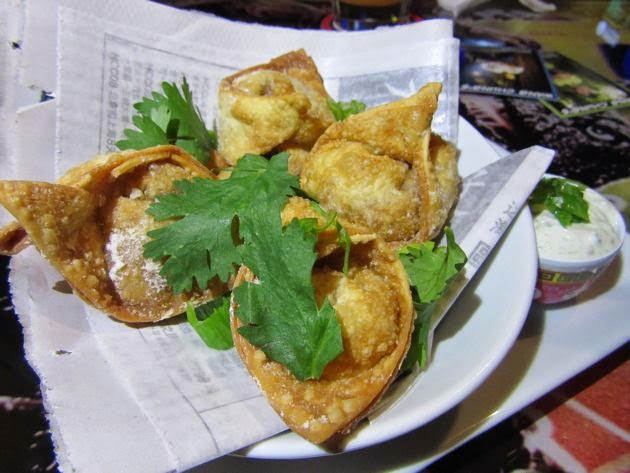 #45 is a crispy ginger crab rangoon. They may offer other fillings from time to time, such as a taco-style filling of refried beans, pork and corn. 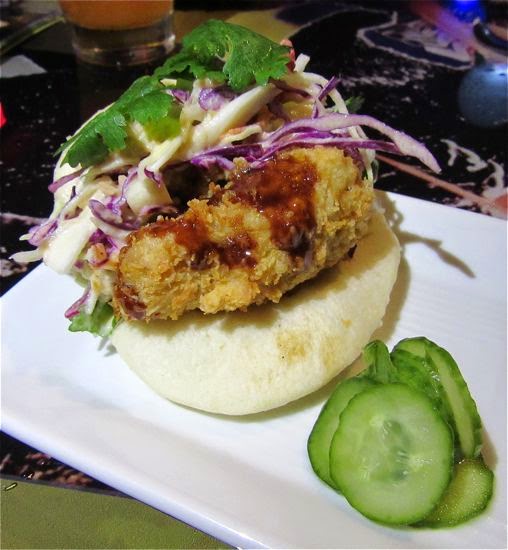 F.O.B. refers to a fried oyster bao representing an Asian take on a po’ boy. 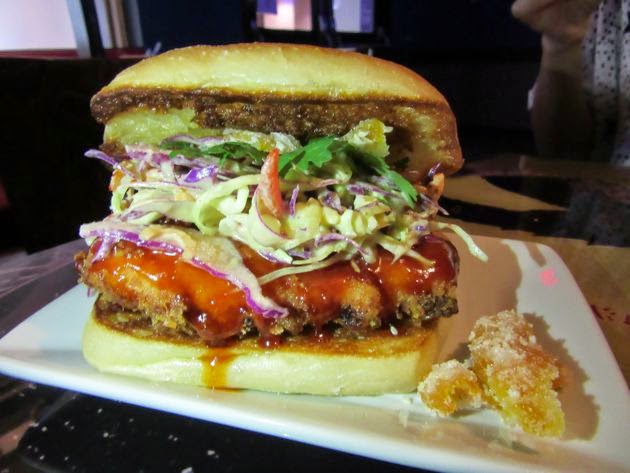 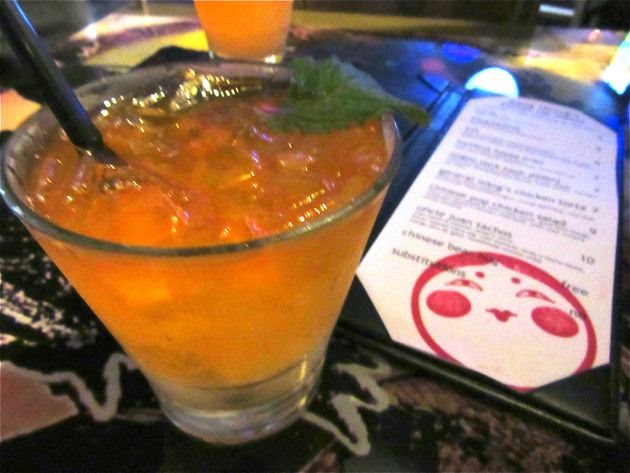 Yuzu Me, Prease! is a $10 cocktail featuring Ocean Organic Vodka, organic ginger lemon, Thai tea and a bottom layer of yuzu gel.
———
Nadine Kam is Style Editor and staff restaurant critic at the Honolulu Star-Advertiser; her coverage is in print on Wednesdays and Thursdays. Contact her via email at nkam@staradvertiser.com and follow her on Twitter, Instagram and Rebel Mouse.
Posted by Nadine Kam at 5:41 PM