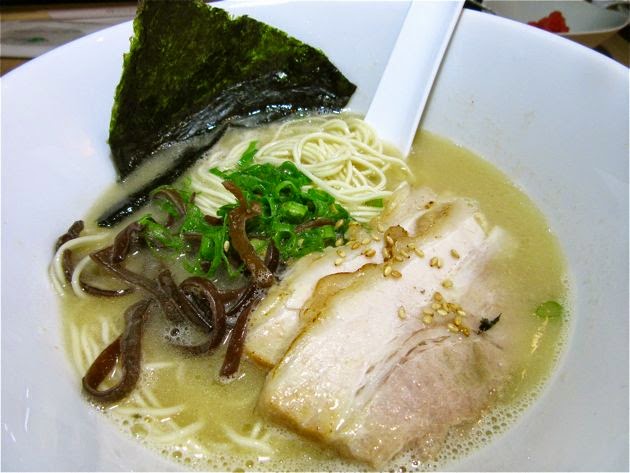 This is the one foodies I know have been craving since their first taste of the collagen-thickened pork bone broth. Spicy and garlic versions also have their merits to the point where, until you find your favorite, you will be caught up in a vicious cycle of desire. If you order the classic, you will long for the spicy. If you order the spicy, you will long for garlic, etc., etc. As much as I like them all, I appreciate the unadorned purity of the classic.

The funny thing is that while the classic elicits many a “Wow!” and “OMG!” moment from local ramen enthusiasts, friends from Japan say people from the Motherland would not be as excited because all this is standard over there. If this raises standards here, so much the better. 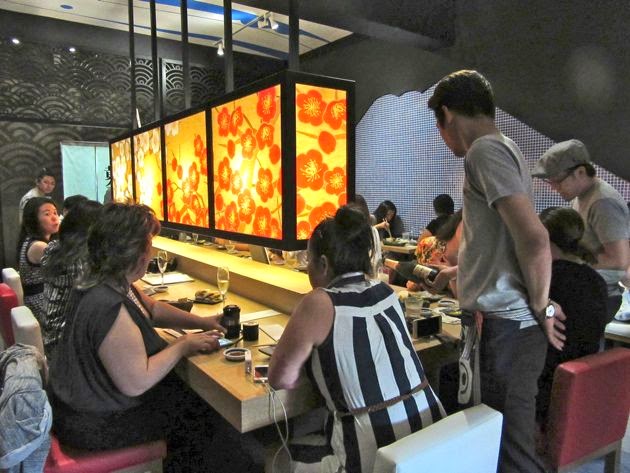 The space formerly occupied by Mediterraneo has been fully transformed. 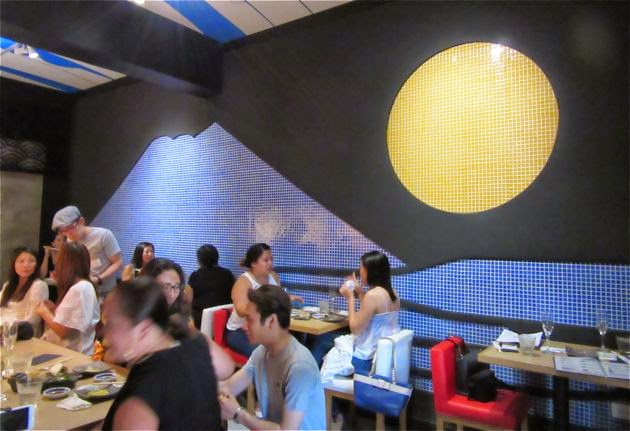 A moonscape featuring Mount Fuji was created in tile on one side of the room.

Of course the broth, created by extracting marrow, minerals and collagen from pork bones over four hours, is only half the equation. The other half is the noodle, and chef Masahiro Endo spent a year going back and forth with Sun Noodle to perfect the thin, straight noodle exclusive to Golden Pork. It is so fine and so much like ramen noodles from Japan that I was surprised it was made by Sun, which I associate with a bouncier, chewier noodle. This breakthrough is very impressive.

Golden Pork was set to be open straight through from 11:30 a.m. to 11 p.m. daily, but word spread quickly during the soft opening period. When the restaurant officially opened its doors March 29, they ended up having to close early after running out of broth by 8:30 p.m.

Beyond the three ramen and three tsukemen specialties, there are salads and side dishes. For something new, try the “Monja” salad, a variation of the Tokyo street-style monjayaki, or crisp veggie pancake. Shredded cabbage and crisp fried noodles are tossed together with corn, bonito flakes and a light dusting of yellow curry. My full review appears in the April 1 issue of the Star-Advertiser. 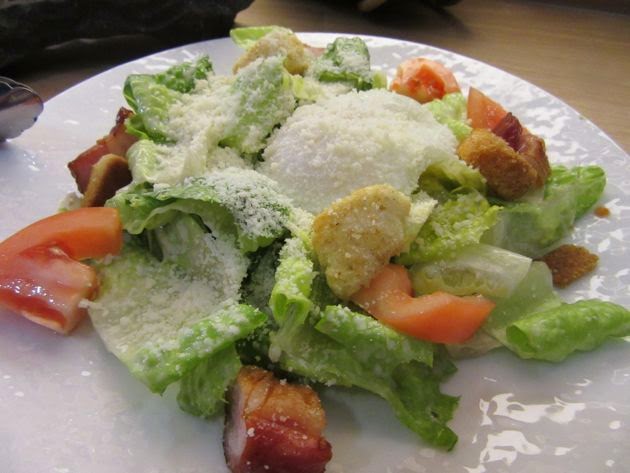 A D.I.Y. Caesar salad allows you to mix in as much or as little of the soft-boiled egg as you want (it’s hidden under all that Parmesan). 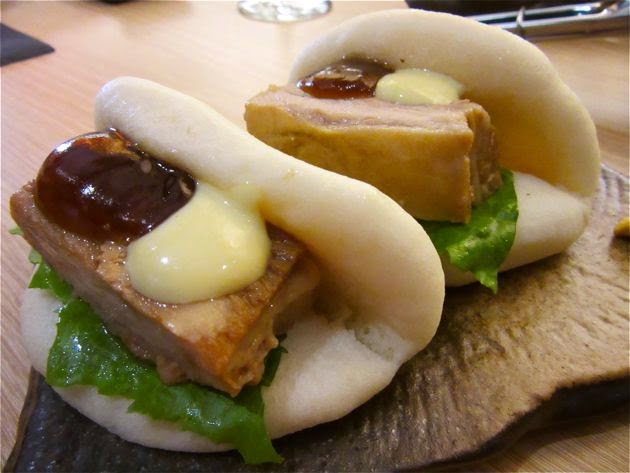 Golden Pork buns are juicy and topped with a teriyaki glaze and sweet aioli with mustard; currently $3.50 each. 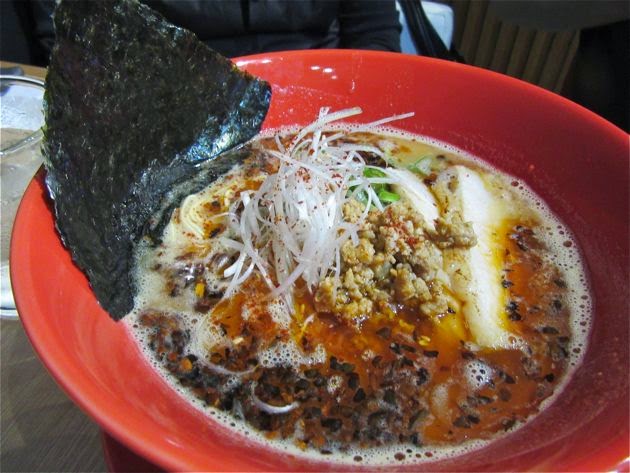 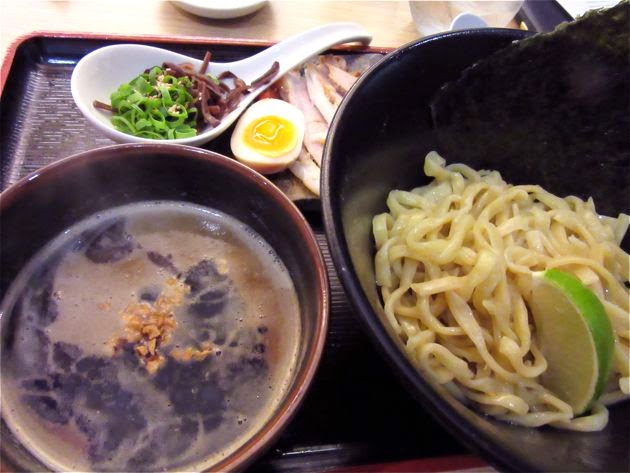 The black garlic tsukemen was also strong on seaweed flavor. I thought there was more purity to the garlic flavor in its ramen counterpart. 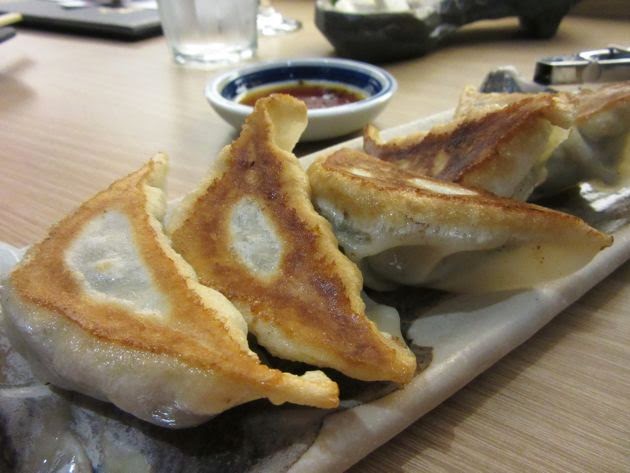 The gyoza is among the best locally, crisp on the outside, with a juicy pork, cabbage and chive filling. Currently $5. 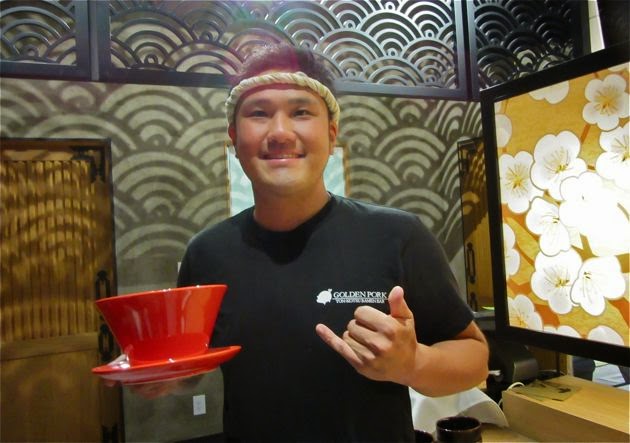 Chef Masahiro Endo had a traditional apprenticeship at an izakaya in Tokyo, where he started as a dishwasher before being allowed near the fryer, eventually gaining expertise in all areas of cooking and fish handling. His passion for food and mastery of extracting flavors from basic ingredients is evident at Golden Pork. 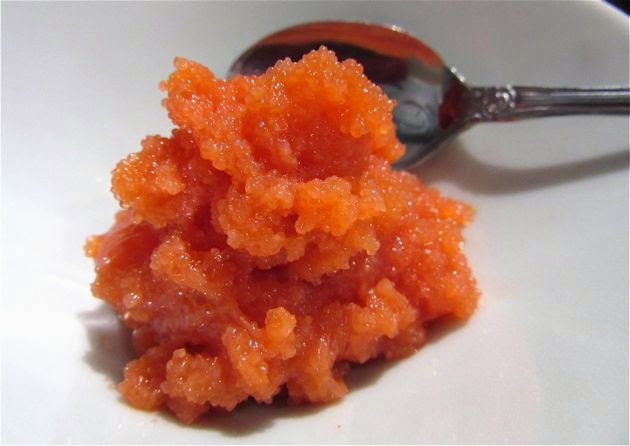 Yuzu-accented cod roe is one of the add-on possibilities. 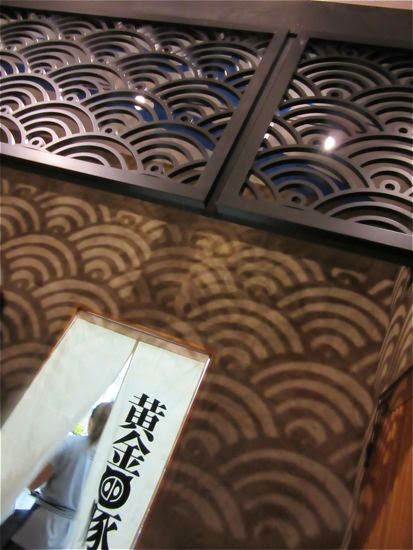 I love the way wood work at the back of the restaurant cast its wave pattern on the wall.
———
Nadine Kam is Style Editor and staff restaurant critic at the Honolulu Star-Advertiser; her coverage is in print on Wednesdays and Thursdays. Contact her via email at nkam@staradvertiser.com and follow her on Twitter, Instagram and Rebel Mouse.
Posted by Nadine Kam at 6:56 PM