Eating SF: Heaven on earth at b. patisserie 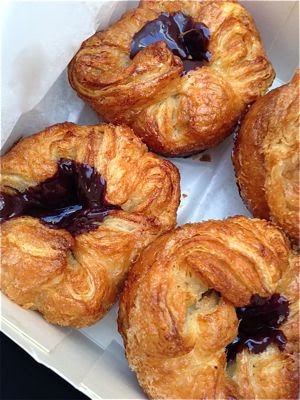 SAN FRANCISCO — When you live in Hawaii, far from any great land mass, you at one point will become a mule. You know the drill. You're getting on an airplane to get off this rock. Friends find out. They tell you beforehand to deliver this to so-and-so, and bring back things. Even if you don't speak to them beforehand, they will find out from Facebook or Twitter posts and text you.

So it is that I received a text while in San Francisco to go straight to b. patisserie and bring home kouign amann. "You have to go! It's orgasmic!!!!"

OK, so it's hard to ignore that many exclamation points, so I made friends with my cab driver and had him at my beck and call on the day of my departure. After dropping me off at the Persian restaurant Maykadeh for lunch, I promised a pear croissant in his future if he picked me up a few hours later and took me to b. patisserie en route to the airport later in the afternoon.

b. patisserie is the work of Belinda Leong and Michel Suas, founder of the San Francisco Baking Institute.

Leong began her career as pastry chef at Gary Danko, before leaving for Europe and working at restaurants and patisseries in Paris, Barcelona and Copenhagen. She seems to have brought back all their secrets because her pastries are divine.

People are particularly enamored by the kouign amann, a caramelized croissant with light candy crunch exterior and fluffy interior, that originated in Brittany, France. The ones I ordered were filled with chocolate, at about $4.50 apiece but soooooo worth the trouble of lugging them onto the plane.

I went straight from the plane to dinner, and they still tasted fantastic 11 hours later as my friends and I surreptitiously gobbled them up after dinner, like drug addicts in the dark parking lot beneath the restaurant.
——————
If you want to go or have a friend headed to San Francisco soon, b. patisserie is at 2821 California St. @ Divisadero St., Pacific Heights. Call 415.440.1700.