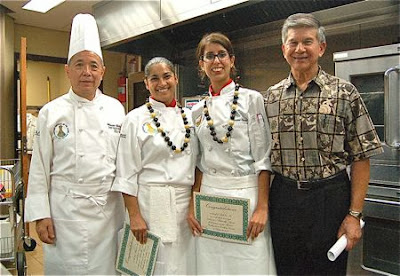 I was lucky enough to be invited back as a judge for Kahala Nui's 3rd annual Healthy-licious Contest, which invites Kapiolani Community College culinary students to create healthy recipes for seniors.

The competition took place Oct. 12 at the KCC Culinary Auditorium, and it's a contest I welcome, because unlike a lot of other food events around town, this one's easy on the opu and body as the students are tasked to use the most beneficial ingredients possible.

In his opening remarks, Pat Duarte, CEO of Kahala Nui, a life care retirement community, said that part of Kahala Nui's mission is to be an advocate for healthy dining for seniors.

He said the dullness associated with low-fat, low-sodium fare often gives hospital and nursing home food a bad rap and, "we want to change that perception and encourage young students to consider careers in this area."

He said diners don't want healthy dishes "to be an afterthought," like presenting a platter of plain steamed vegetables. In creating this competition, he said Kahala Nui aims to push students to create "something that will be the star of the menu."

This year, a field of 60 teams of two were reduced to four, based on submission of essays and recipes. Students were allowed to work with main ingrediens of chicken or a vegetarian protein. Scoring was based on taste, simplicity of preparation, nutrition, organization and delivery, and visual presentation. 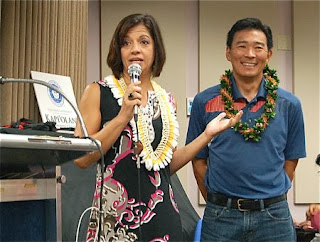 Emcee Kim Gennaula received an assist from her "famous" husband Guy Hagi. She joked that now that she's been off TV news for five years, restaurant hostesses don't remember her, but will rush to seat Guy, and her own son doesn't recall that once upon a time, mom was more famous than dad. 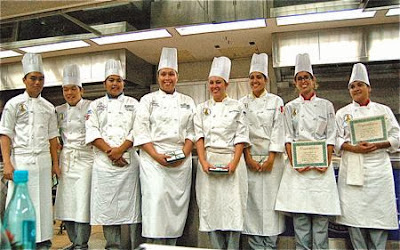 All the students lined up with their awards and gift certificates for their participation. 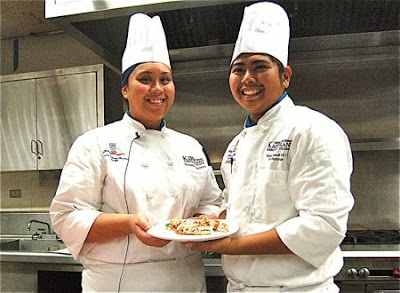 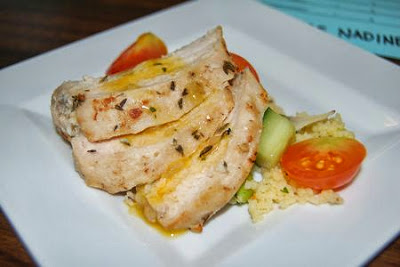 As part of the duo's presentation, they pointed out eight common allergens and presented such substitutions as quinoi for the wheat semolina in couscous, and mushrooms and vegetable options such as grilled eggplant in place of soybeans in the couscous.

The chicken was tenderized and flavored with a marinade of apple and pineapple juices, and among the components of the vinaigrette were pineapple, apple and lemon juices, mango purée, honey, fresh tarragon and olive oi.

I have requested a recipe booklet they are compiling, and may be able to share the entire recipe at a later date. 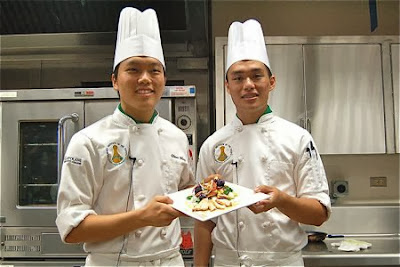 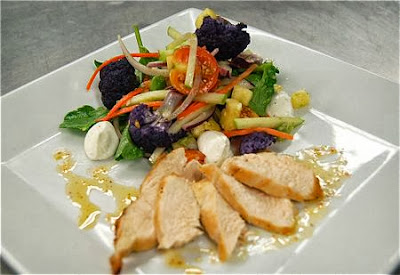 Team 2
Vince Hong, left, and Kenneth Lee prepared a tasty Asian chicken salad with a mix of nutritious greens and purple cauliflower to boost antioxidant and flavonoid compounds such as anthocyanins that may help to regulate blood lipid, insulin levels and body weight, as well as help to lower cancer risk. Purple cauliflower also contains glucoraphanin that can be converted to compounds with anticancer properties.

The plate was dotted with cream cheese to boost protein and vitamin D, and their sauce included the mineral and calcium content of fish sauce, vitamin C of lemon juice, and palm sugar that isn't as processed as cane sugar. 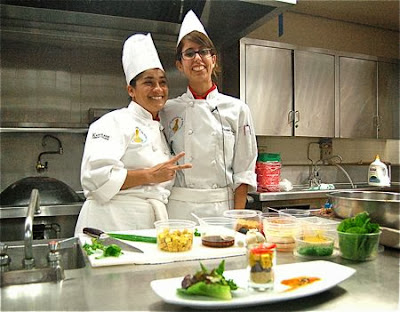 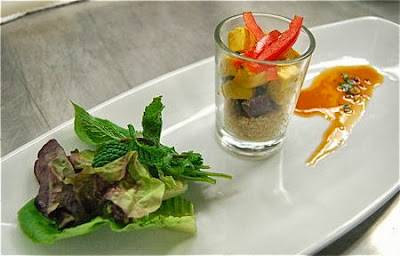 Team 3
Mariana Oliveiro and Santos Quesada won with their simple, but flavorful Asian tofu lettuce wraps that they suggest offering up at your next potluck to impress your friends and help prolong their lives.

In coming up with their dish, they took the typical senior's fixed income, which also tends to apply to singles and families that need to stretch their dollars. Plus, Quesada pointed out, it's easy enough for anyone to make, "even if they don't go to school at KCC."

The garrulous Quesada kept the audience laughing, and she could easily have a future as a TV chef. 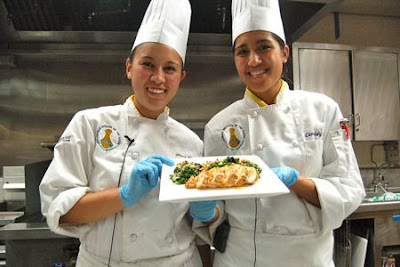 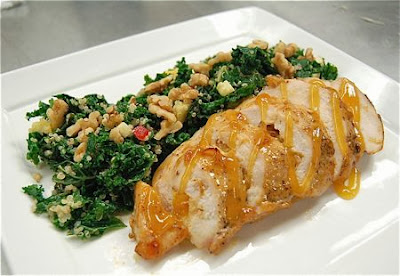 Their chicken was basted with a sauce of apricot preserves, Dijon mustard and lemon juice, and drizzled with the same sauce after it came out of the oven.

Their salad was topped with a layer of crunch walnuts, considered one of the world's healthiest foods, rich in vitamin E in the form of gamma-tocopherol that provides protection from heart problems. 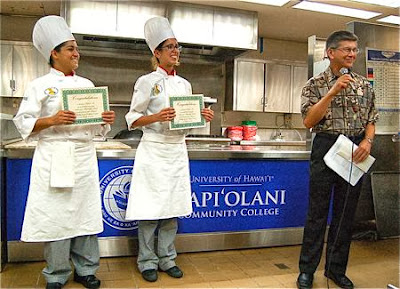 Quesada and Oliveiro received their awards from Pat Duarte.
Posted by Nadine Kam at 6:51 PM