Halloween at Shokudo and other surprises 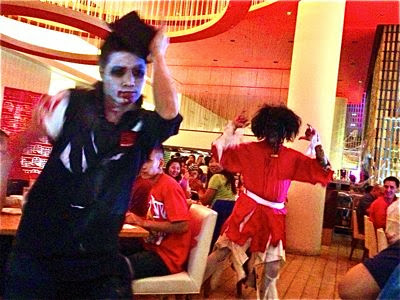 Nadine Kam photos
The "Thriller" flash mob happens again at 7 and 9 p.m. Oct. 30 and 31 at Shokudo Japanese Restaurant and Bar.

Diners at Shokudo Japanese Restaurant & Bar last night were surprised by an early Halloween treat, that was also a trick for a few wee ones who started crying at the sight of a "Thriller" flash mob.

Maybe I would have cried too if I were 1 year old and saw a zombie approaching. I have to admit it was a little unappetizing to see waiters in "bloody" shirts. Luckily, it's more of a seafood than, say, a beef restaurant, and one can get away with a lot for Halloween.

Diners were surprised to see waiters dropping off their sushi and entrees at tables, then suddenly drop to the floor.

I was surprised that no one in the audience got up to join the staff in the dance, but if you can't resist dancing to thriller, the performance will be repeated at 7 and 9 p.m. Oct. 30 and 31.

Meanwhile, you can check out the video here: http://youtu.be/zcM-_4mUwd0

While at dinner, I had the opportunity to catch up with CEO Hide Sakurai, who has plans to open Shokudo's outdoor patio as a beer garden come December. And even bigger plans to open a 12,000-square-foot Mexican restaurant on the top floor of the Victoria's Secret building next spring.

Why Mexican? He feels there are already an abundance of Japanese restaurants in town, and doesn't want to compete with himself either.
——————
Shokudo is at 1585 Kapiolani Boulevard. Call 941-3701. 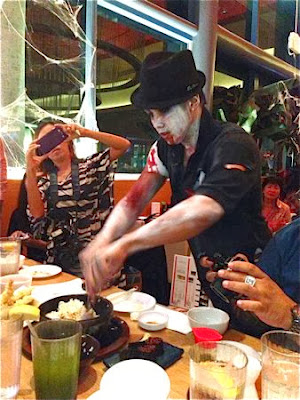 Lucky this isn't a beef restaurant. A waiter bathed in "blood" in the spirit of Halloween mixes a bowl of garlic shrimp rice, while Ritsuko Kukono snaps a photo. 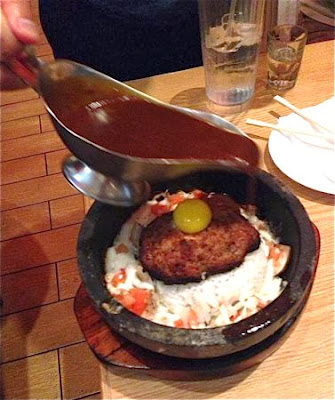 Gravy is poured over a new dish of ishiyaki loco moco, with beef-and-pork patty, $12.45. 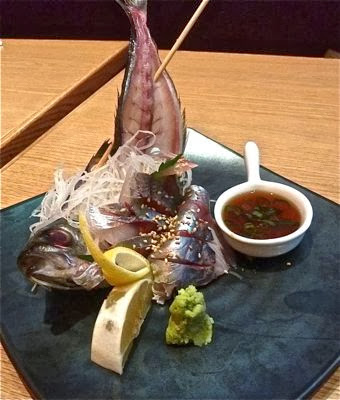 Aji sashimi. We ate the bones (deep-fried) at the end of the meal. 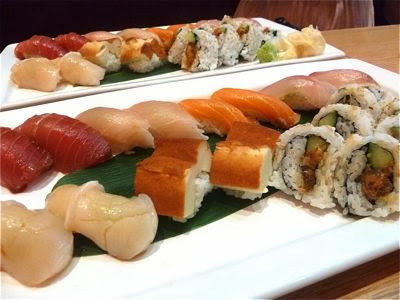 Ginza platter ($32.95) of assorted sushi, most flown in from Japan's Tsukiji Market, with scallops from Hokkaido, and Shokudo's signature cakelike sweet tamago Castella that looks like bread in the center of the photo. 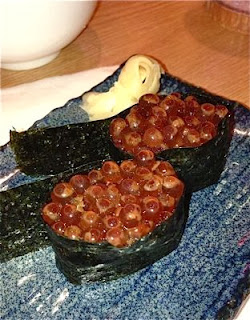 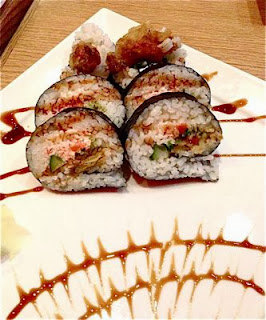 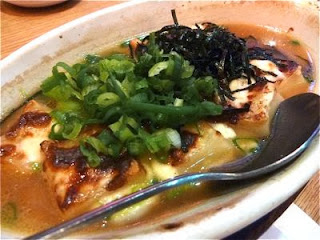 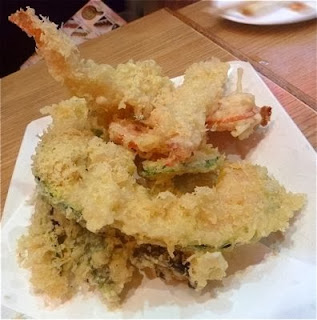 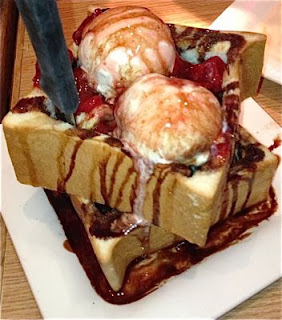 Dessert of strawberry honey toast, $7.45. For a change, you might also try the new tempura-fried bread pudding, served with sake caramel sauce and vanilla ice cream.
Posted by Nadine Kam at 7:09 PM