In memory of Christopher Neil 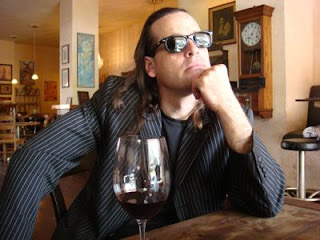 Nadine Kam photos
My late husband, Christopher Neil, during one of our lunches at Du Vin.

Yes, I've been absent from this blog for a while. Maybe you read in the paper or heard that my husband Christoper Neil died, and I have been dealing with all the personal matters that follow with the passing of a loved one.

For as much as I've been in the public eye, we were very private, so most people never knew we shared 22 wonderful years together. And, strangely enough, he never accompanied me much on my restaurant reviews, remnants of a time when we were the outlaw Romeo and Juliet of our two newsrooms, he at the Honolulu Advertiser, me at the Honolulu Star-Bulletin, and the Honolulu Newspaper Agency library was the neutral turf between the two competing newsrooms. The library was where we met, and it was a good thing, because for our entire careers, he worked nights and I worked days, and although I had seen him a handful of times before he introduced himself, after that, I rarely saw him in the building.

Sometimes I would see him peeking into our newsroom from the top of the library steps. It's only now that someone who once worked for us told me that he was looking for me, and when she'd tell him, "She's not here!" he'd run away. But I was there, I did see him and wondered what he was doing there. I never put two and two together.

Because of the competition between the two dailies, once word got out that we were together, he was banned by our management from accompanying me on my restaurant reviews. He was never a foodie anyway. Yes, he had excellent taste and enjoyed good food, but he was too sophisticated to spend his time chasing trends, the next chef, the next hot cuisine. He appreciated the good things in life on his terms, at his leisure.

My favorite story about getting to know him was when, after a couple of botched attempts to go to concerts together—he had invited me to Los Lobos but I couldn't make it, I had invited him to Dread Zeppelin but he couldn't make it—we ended up at some dive bar on Kapiolani Boulevard. I don't even remember the name of it. As we looked at the menus, he said, "I heard the sardines are good here." 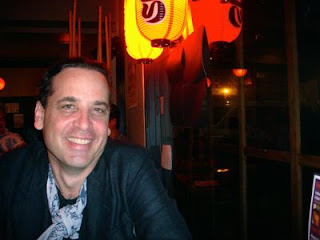 Christopher at a restaurant in Kailua, where we lived for 10 years.

At that time, I was the first and only daily newspaper restaurant critic in town and most guys would have tried to impress me with their good taste and knowledge of food. Not Chris. He was neither pretentious nor ever went out of his way to impress anyone. He was just real and honest to a fault. I was so enamored that in my review of Manoa's Cafe Brio one year, I spelled his name out in the first sentence of every paragraph.

Chris had a beguiling mix of swagger and sensitivity. A rock star is what many people called him. He had an aura and energy that drew people in, irregardless of age or gender. Even those who only met him once came away with strong opinions about Chris and after his passing they were able to detail all the particulars of their meeting.

He cultivated a tough facade, but I knew him to be a kind, sensitive soul. "A soft touch," is how a colleague described his generosity. He was a selfless individual in many big and small ways. Even when he was sick, he put my needs and feelings above his own, so if I came home after a hard day he would ask, with great concern, if I was all right and would do everything possible to make things right. If I even mentioned in passing, that I was hungry, he'd jump out of bed to make me cheese and crackers, when simply moving caused him great pain. 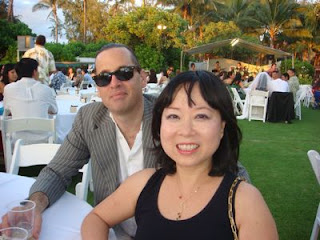 After Chris became sick with lung cancer, whenever he felt sorry for himself, he often thought of students he met in his college dormitory at Kent State, before he moved on to earn a Philosophy degree at Boston University. At school in Ohio, able-bodied students were paired with handicapped students, many of whom had but a few more years to live. Yet, they worked so diligently toward their degrees. He admired their tenacity and the experience taught him a lesson in the strength and capacity of the human spirit. He had also learned early, growing up in Connecticut, about the inequities of life and the arbitrary nature of wealth and poverty, as well as the generational continuity of both states. It made him a crusader for equality and the idea that every child deserves a chance to succeed in life.

Neither I nor doctors could keep him alive, but I do want to keep his spirit alive.

Since the death of his friend Alex Lee, an aspiring chef who was killed outside a bar in the early 1990s when he was in his 20s, Chris and I had always talked about establishing a culinary scholarship once we retired and had some spare cash. I can't think of a more appropriate time than now to make his wish come true, which is why I have established a culinary scholarship at KCC's Culinary Institute.

For those who wish to contribute, checks can be made out to UH Foundation, with the notation "Christopher Neil scholarship fund," and sent to:

Or use this button: