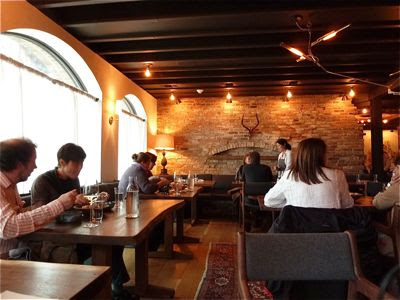 HUDSON, NY — Move over Brooklyn! The hottest restaurant in New York at the moment is Zakary Pelaccio's Fish & Game, over in Hudson, and I was lucky enough to be in the area just a week after it opened on May 15.

It was serendipitous that I was visiting in-laws in Lakeville, CT, after flying to New York via Delta, where I read a small blurb about the restaurant in the airline's SKY magazine. I made a mental note to visit when I was up in Lakeville, an hour's drive to Hudson, which impressed me on my last trip. It's a small, day tripper's town, right on the train line, that makes it easy for Manhattanites to get there. With that steady stream of explorers, Warren Street has filled up with stylish boutiques, jewelers and antique shops, as well as the restaurants that keep them fueled.

When visiting Hudson, though, you really need to keep your eye on the calendar. Many spots open only Thursdays through Saturdays. Restaurants may open only in the evening, making it hard for planning to drive in just for a day. I had planned to be out of there while it was still light to see the way home, or at least out of Hudson, but alas, the prix fixe menu meant dining was on their time and "in by 5:30-out by 7:30" dining plans became out by the darkness of 9 p.m. It took two hours to get back to Lakeville navigating by my phone's Apple Maps—sorry, I hadn't loaded the Google maps yet—after my friend's phone with Google Maps died, and we reached home with 8 percent phone battery. Of course, by then the whole extended family in CT was frantically looking for us in a search that extended to family in New York and Hawaii! I never heard the end of it the rest of my trip.

My desire to visit the restaurant was reinforced when the New York Times followed up with a blurb on the restaurant in their food section on May 22nd. The funny thing is, even though the writers all live in the area, none had been able to make it out there yet, allowing the Hawaii reporter to beat them to the table, though I walked in without reservations on a rainy day, wrongly thinking that perhaps the hype hadn't kicked in yet.

Well, the restaurant was packed and we were told there were no tables available that evening. I asked if we could have dinner in the bar, and they said we could. When I looked over, the bar area was full as well, so we waited a bit and it seemed that a couple was preparing to leave. Just about then, GM Scott Brenner came up to us and said he had made room for us, explaining they try to be accommodating. Nice! 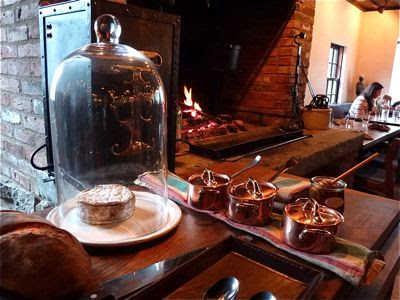 A fireplace that sometimes doubles as an extra oven, brings a rustic, homey ambience to the dining room.

What made it nice, was that it was a followup to my visit to one of Pelaccio's other creations, the Malaysian barbecue restaurant Fatty 'Cue, in Brooklyn, two years ago. He seems to favor Asian flavors, but the effect is much subtler at Fish & Game, where the menu highlights fish, game and produce from throughout the fertile Hudson Valley region.


The entire project marked a collaboration between the chef and architect Michael Davis, who restored the red brick 19th century blacksmith shop, owned by Pelaccio’s partner, Patrick Milling Smith, with handcrafted and/or reclaimed and repurposed details. The dark wood interior warmed by a wood-burning oven and fireplace. The decor is vaguely hunting lodge meets bordello, an effect of red velvet wallpaper in the foyer.

The seasonally driven menu changes each day, and we were presented with the option of two seven-course tasting menus—one vegetarian, one not—at $68 per person. Quite reasonable, though one couldn't be too strict a vegetarian because I saw duck egg as one of the ingredients on the menu. At any rate, my friend and I are confirmed meat eaters, so ordered the same menu as follows. Food is prepared simply to allow diners to appreciate the freshness and natural flavors of the area ingredients. Truly the work of an assured chef who doesn't feel the need to entertain with the bells and whistles of heavy sauces and liberal spicing, though there is enough there to maintain diners' interest, such as the use of preserved lemon and salted chili to spark the palate. 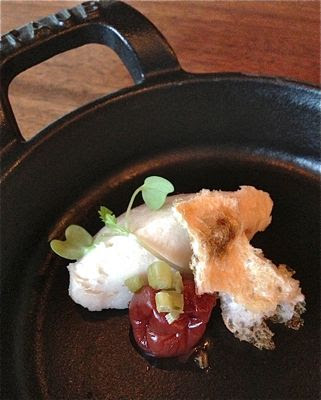 Trout rillette with chicharones and cherry. 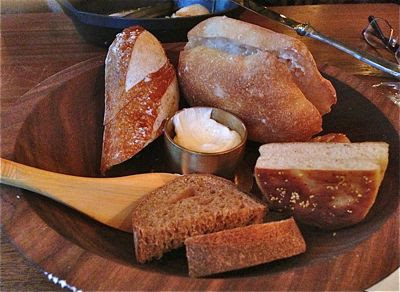 Swoon-worthy bread, including salted pretzel bread, all accompanied by nine-month aged butter, washed with moonshine, with the flavor of a goat milk cheese. 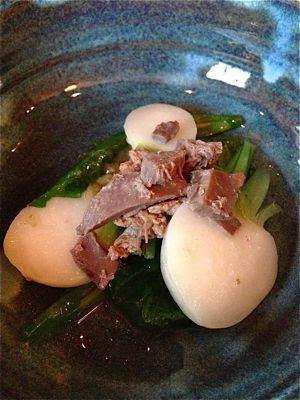 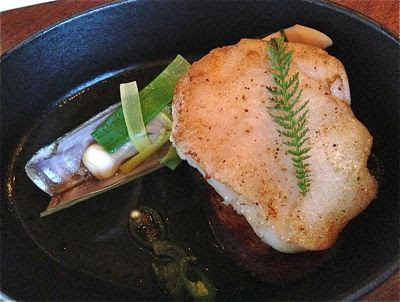 Wood-roasted hake in clam juice with salted chili and sweet razor clam with green onions. This dish was delicate perfection. 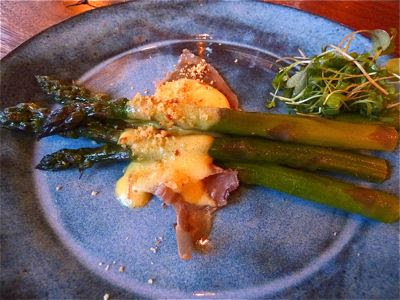 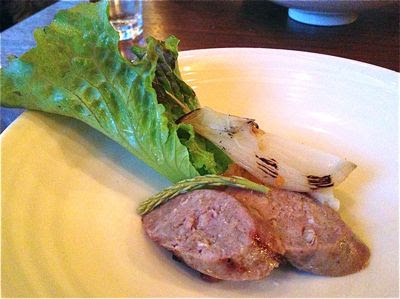 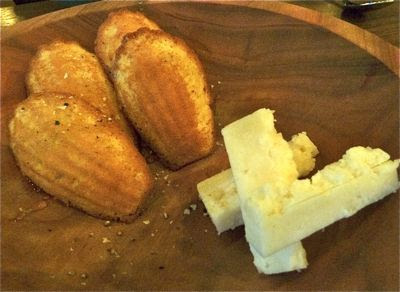 Warm madeleines sprinkled with cracked black pepper and drizzled with raw alfalfa honey, with Lancashire cheese. Not pictured here is the rhubarb sorbet, and "assortment of leaves" salad dish that preceded dessert.

Fish & Game is open for dinner from 5 p.m. Wednesdays through Sundays. 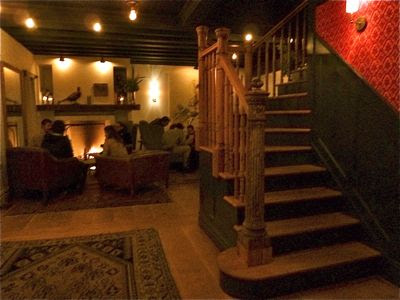 The foyer and bar area with fireplace at Fish & Game. 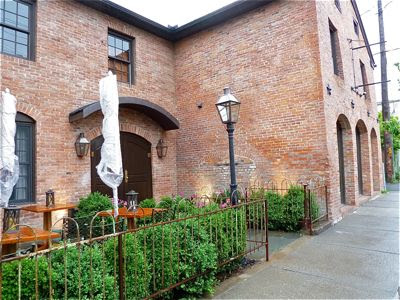 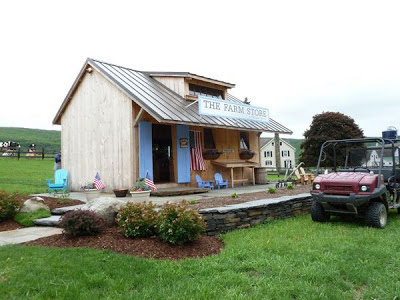 En route to Hudson, day adventurers can stop at many a farm store to pick up area produce, honey, meats, jams, jellies, goat and sheep milk soaps and other wares. This is the farm store at Willow Brook Farm. 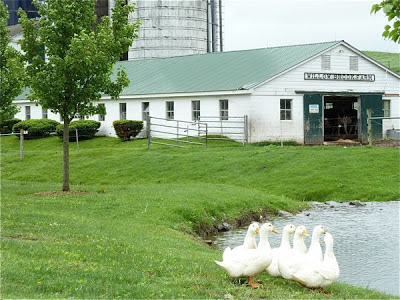 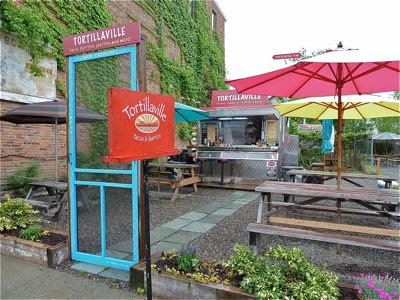 The entry to Tortillaville on Hudson's Warren Street. 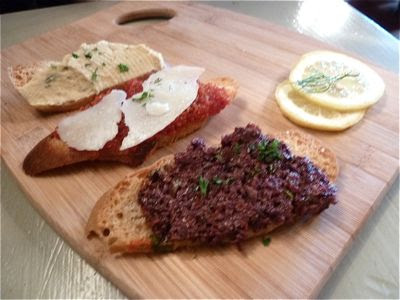 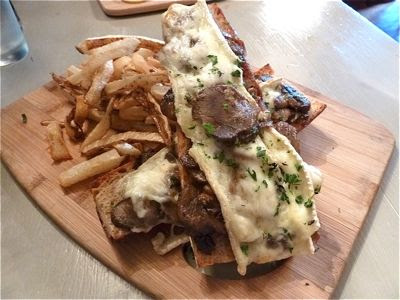