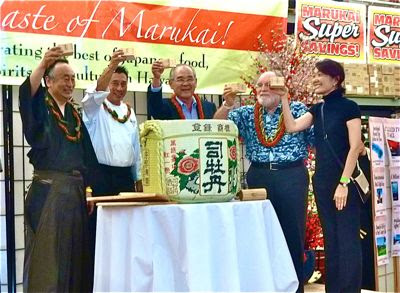 Marukai Wholesale Mart welcomed food and sake fans to enjoy dozens of dishes along with a variety of sake, shochu and Japanese beer during its annual Taste of Marukai event that took place April 11 at Marukai's Dillingham store at 2310 Kamehameha Highway, which packed in its 1,000 guests easily.

Sure there were lines for sashimi, sushi from Gokujo Sushi and edibles cooked up by 3660 On the Rise chef Russell Siu, but there was plenty to go around, so much so that chances are, most people probably got full before they could sample every offering.

Although there is less emphasis on outside chefs than in past years, in favor of showcasing fresh seafood and products carried by Marukai, crowd pleasers from past events were back, including fresh grilled abalone, platefuls of sashimi, made-to-order handrolls, tempura, yakitori, and more.

Elsewhere in the store, highlights included a soba-making demonstration, amezaiku Japanese candy art, and a fish-cutting demo. People seem to be fascinated by the process because a video I made three years ago continues to draw hits and comments. 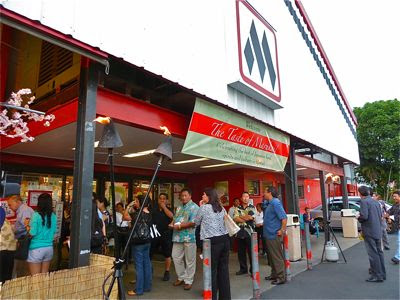 Guests started lining up early for Taste of Marukai for a bite of Japanese specialties. 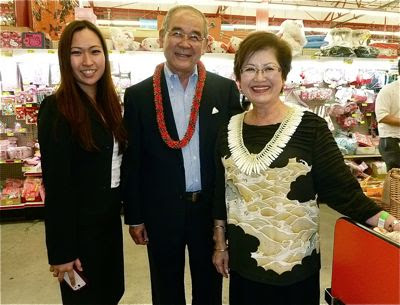 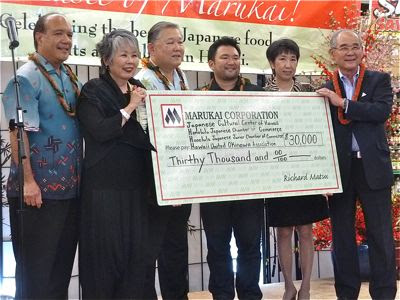 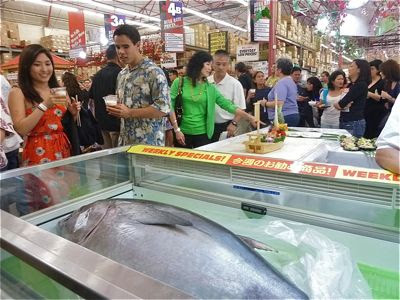 Diners in line passed a sashimi boat, below, and ahi en route to sashimi plates. 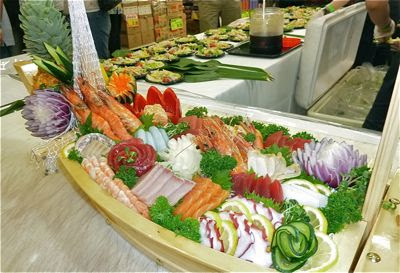 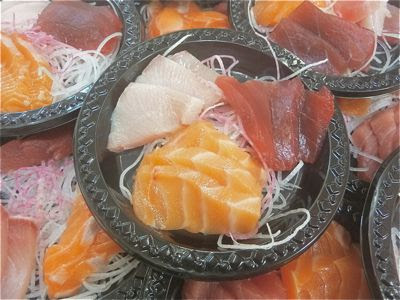 Plates full of the big three of sashimi: hamachi, maguro and sake; the fade in the photos is due to refrigeration mist. 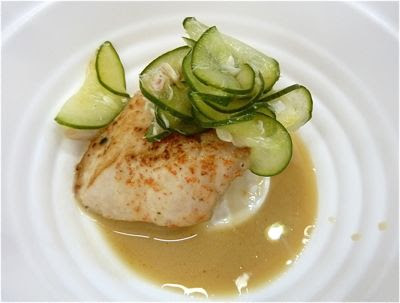 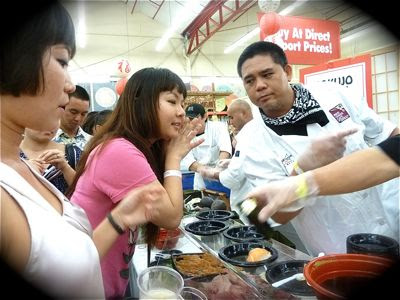 An event goer shares her wishes with a sushi chef from Gokujo Sushi, which provided made-to-order nigiri and handroll sushi. 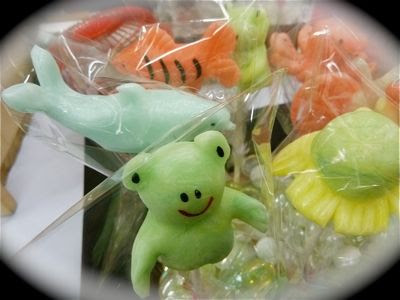 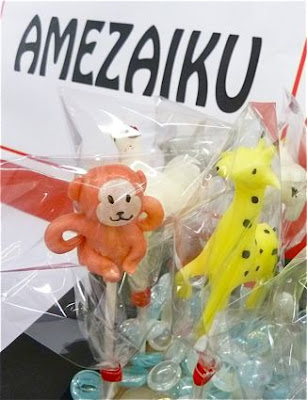 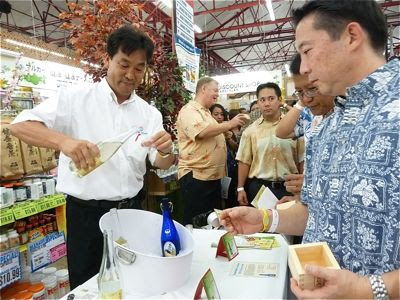 Several breweries were represented at stations throughout the store, offering premium sake and shochu samples. 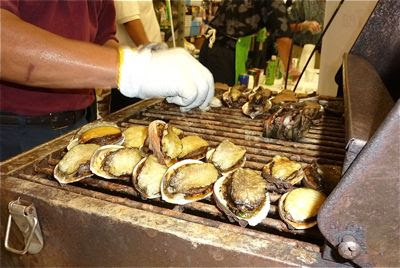 Abalone fresh off the grill. 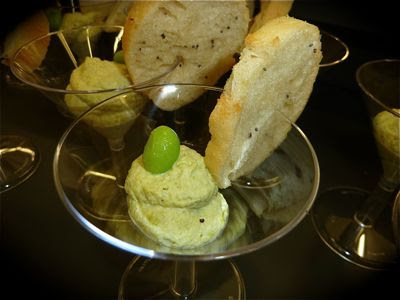 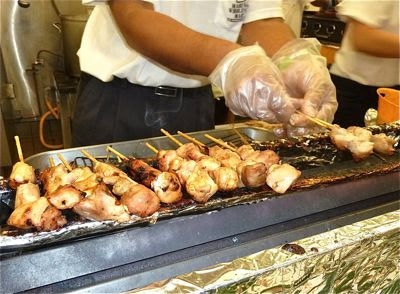 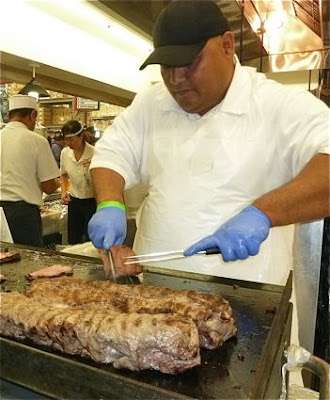 Slicing into Harris Ranch prime rib roast, on the plate below. 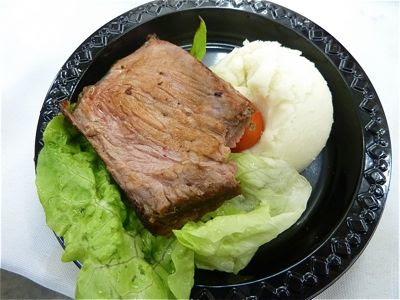 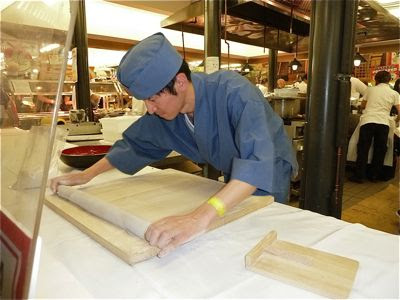 Mr. Sugata from Shimane, Japan, rolls out soba dough. Demonstrations continue from 10 a.m. to 3 p.m. April 13 and 14 at the Dillingham Marukai. 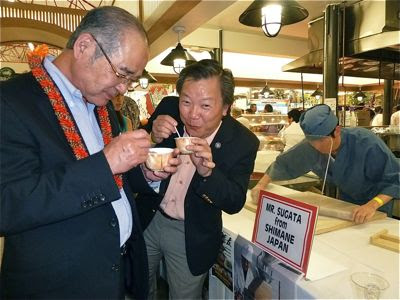 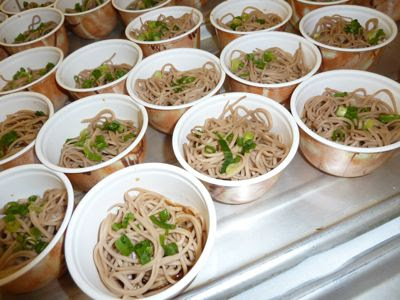 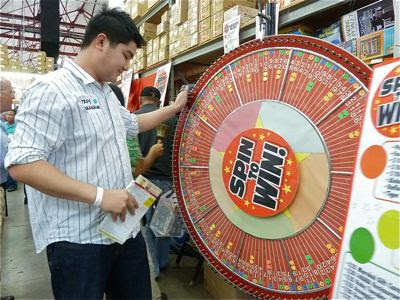 Guests could spin a wheel for prizes ranging from restaurant gift certificates to interisland vacations and a Las Vegas trip for two.
Posted by Nadine Kam at 7:07 PM