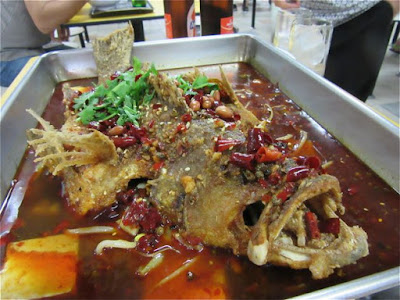 Nadine Kam photos
When in doubt traveling in a foreign city, follow the locals. In Singapore’s Chinatown, a lot of parties were centered around this fish dish. Watch the video to see the fish cooking over fire.

Day 2 in Singapore saw us heading to Chinatown where we were hoping to find the nation’s famous chilli crab. Possibly because of demand, hawker stalls were out. But, in People’s Park food court, we saw a wondrous sight: people walking by with large pans carrying Chong Qing grilled fish.

It’s a variation of a hot pot dish that originated in Chong Qing, China, part of Sichuan province, which explains its spicy character and use of the tongue-numbing Sichuan peppercorn. Here though, the sauce was so balanced I didn’t mind the peppercorns at all.

The fish—in this case grouper—is not really grilled, but deep-fried; layered over bean sprouts, sliced onions and other veggies; doused with the soy-sesame-black bean-ginger-spice sauce; then topped with peanuts and cilantro. It is delicious! 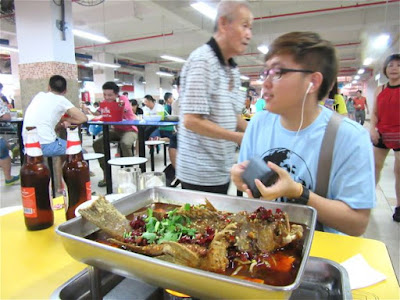 It wasn’t hard to spot locals sitting down for a lunch of Chong Qing grilled fish, one of those dishes you see and know you must try. 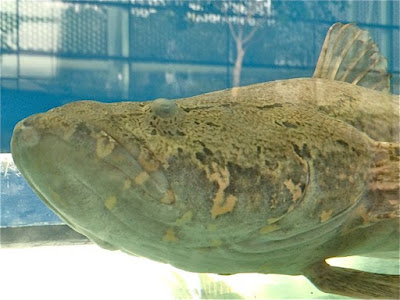 The grouper doesn’t look much more attactive when it’s alive. I took this photo at my hotel, the Marina Bay Sands.

Another Chinatown treasure is bak kwa, which translates as “fragrant jerky.” Singapore’s sweet, tender and juicy pork jerky sells for about SG$25 per pound, or about $18.50 in U.S. dollars, at outlets like Bee Cheng Hiang, where customers can sample different varieties.

Fresh fruit is also sliced, wrapped and sold in healthful single-serve to-go style. While there I also tried bingtanghulu, or candied Hawthorn berries, for the first time. The inch-and-a-half berries are stacked on skewers and not something I would try if I just saw it on the street because I’m more attracted to savory bites than sweets. But, I was with Sean Morris who recognized them and liked them. We certainly don’t have such a thing in Hawaii, so I tried it and liked the crunchy, crackly sweetness. If you happen to go and try them, watch out for the large seeds.

Singapore’s Chinatown is so clean compared to our own. In spite of the number of seafood dishes being offered, there were no fishy odors, no sight of fish guts lying around or puddles of fish water.

In fact, everywhere we went was clean, without a scrap of paper or cigarette butt on the ground. It just goes to show you what can be done if everyone takes pride in their city and makes the effort. 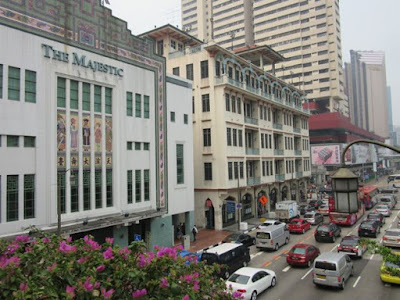 Singapore’s Chinatown is beautiful. The Majestic theater on Eu Tong Sen Street had a long history, initially built as a Cantonese opera house in 1928, converted into a theater by the Shaw Brothers in 1938, taken over by the Japanese during World War II for the screening of propaganda films, then converted back into a Chinese film theater until it closed in 1998. In 2003, it reopened as a three-story shopping complex. It is now closed. 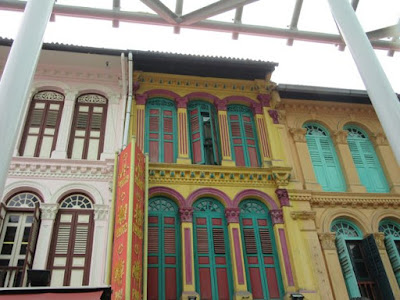 I love the colonial architecture of the Chinatown and that they have the pride to keep the buildings beautifully painted. 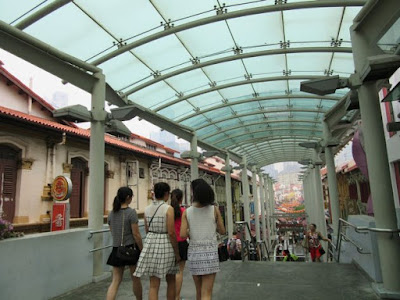 An overpass allows you to avoid traffic below, although Singapore is one international destination where drivers tend to be cautious because laws there can be Draconian. That’s what makes it so safe for travelers, unless you bring in drugs. If caught, you will likely be executed. 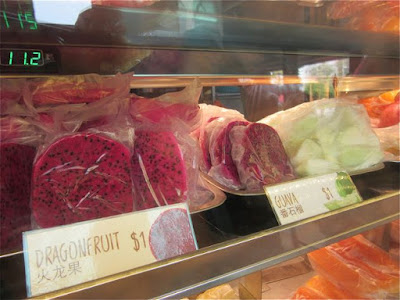 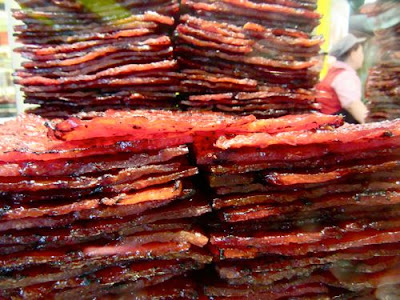 Singapore’s Chinatown is also known for its bak kwa, or sweet grilled pork jerky, this batch from Bee Chang Hiang. Alas, I tried to bring $40 worth of jerky home and was honest and listed it on my Customs form. And they confiscated it! So mad! Now my friends and family won’t know how sweet and juicy and tender it is unless they travel to Singapore themselves. If I thought it would be taken away, I would have saved myself the trip of going back to Chinatown to pick it up fresh before my flight. Customs should at least reimburse us if they’re going to steal our food! It’s not like it’s poisonous. I already ate it on the street!
—————
Nadine Kam is Style Editor and staff restaurant critic at the Honolulu Star-Advertiser; her coverage is in print on Wednesdays and Thursdays. Contact her via email at nkam@staradvertiser.com and follow her on Twitter, Instagram and Rebel Mouse.
Posted by Nadine Kam at 12:40 AM