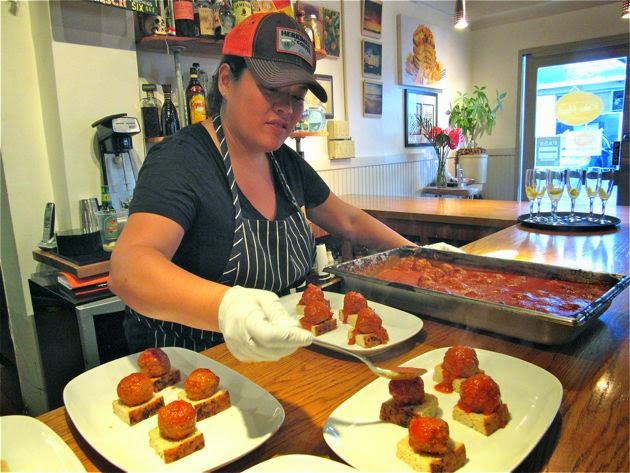 Koko Head Cafe was the site of the second in food writer Sean Morris’ Secret Menu dining series. As a culinary insider, he’s privvy to dishes chefs are able to pull together with ingredients in their kitchen, that are not on their formal menus. These dishes are generally available by request, staff time permitting.

The dishes they build are often the things they like to eat themselves, and at Koko Head Cafe represent, that meant a no-holds barred feeding frenzy far more decadent than anything you could create for yourself at home, considering what they’re starting with. Imagine: A whole deep-fried Jidori chicken karaage burger topped with cheddar cheese, sugar-coated billionaire’s bacon and rich mushroom gravy, on sweetbread bun, arriving halfway through the meal.

Then there was Donburi Chen, named after fellow chef William Chen, who helped Koko Head Cafe chef Lee Anne Wong in preparations for her book, “Dumplings All Day Wong.” After preparing a meal for all who helped her, Chen insisted he put this particular dish on her menu, a sweet chili glazed pork and egg combo over greens with black garlic “soil.”

With chefs trying to outdo each other with each dinner presented, there was a generous amount of food, and with nine similarly weighted courses, there was plenty of to-go boxes being handed out at the end of the meal.

If you are intrigued by any of these dishes, it doesn’t hurt to inquire about availability. I was particularly enamored of another over-the-top course of a kim chee hash brown Reuben, which I would love to have again … next time starting with an empty stomach!

During the evening, chef Lee Anne Wong took the opportunity to give shoutouts to her kitchen staff, including Clark Neugold and chef de cuisine Nicole Anderson, who will take over duties at Koko Head to allow Wong to focus on her newest endeavor, a ramen bar slated to open before summer. 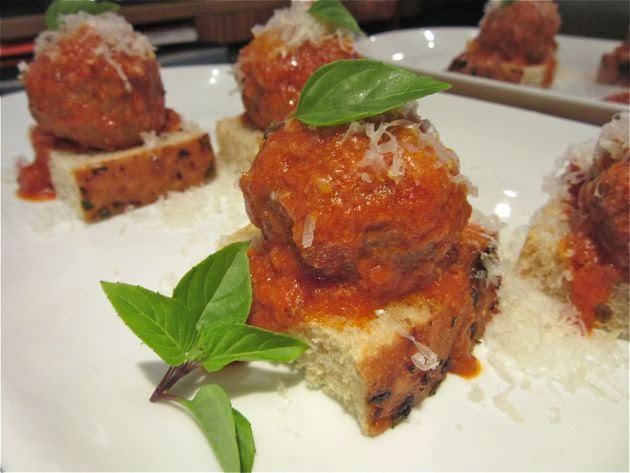 The Parmesan and basil-finished meatballs. 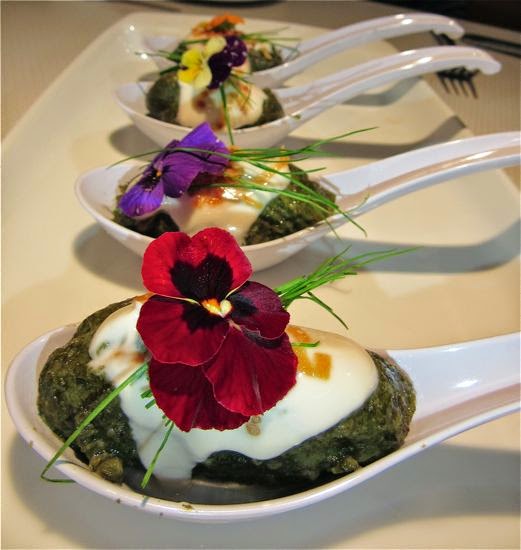 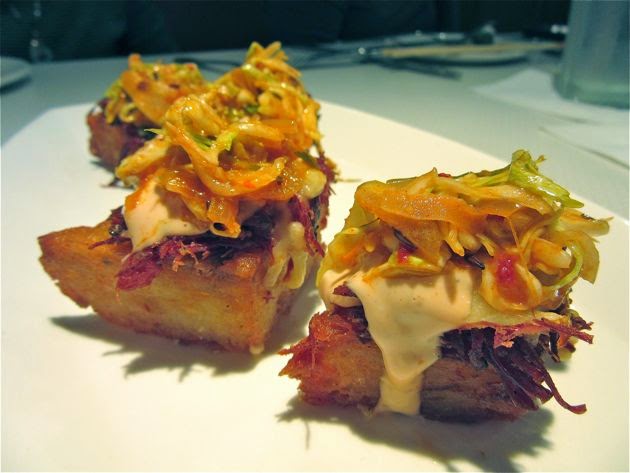 Call it over the top, but the kim chee hash brown Reuben was my favorite dish of the evening. I will definitely be back for this. The slaw makes it healthy, right? 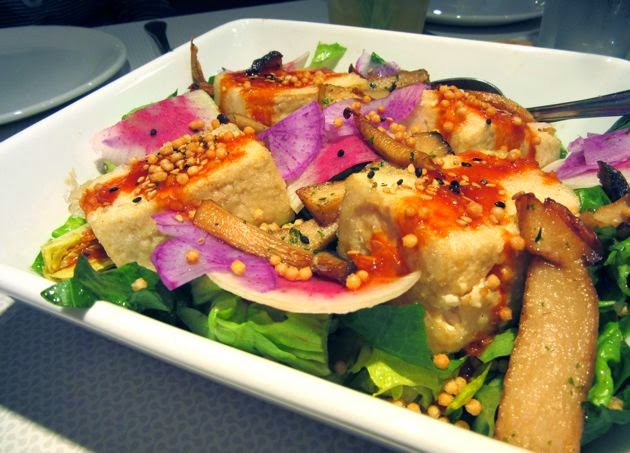 The Koko Head Cafe staff gets creative in building their daily “kitchen sink salads.” On this night it was all about fried tofu on a bed of greens beautifully garnished with Ali’i mushrooms, watermelon and timely Easter egg radishes, with the crunch of bubu arare. 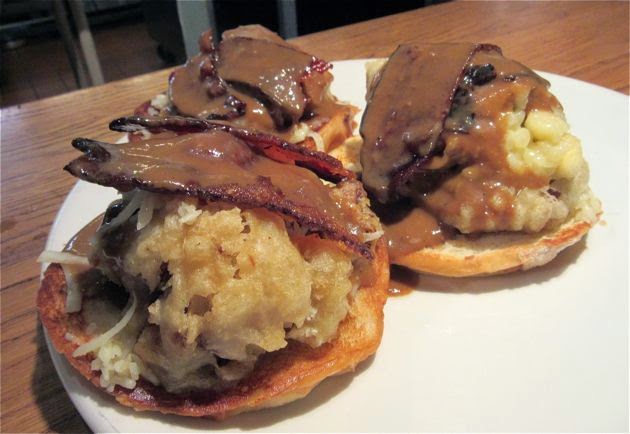 By the time the Jidori chicken sandwich arrived, people were beginning to feel stuffed and we could not believe we each received a whole sandwich. We thought they would be quartered, because that’s all I could handle of this mochiko fried chicken topped with cheese, billionaire’s bacon and mushroom gravy on sweetbread bun. Oy! This proved to be a favorite of many. I loved the gravy the most, with all its glorious mushroom essence. Because our table of four shared a couple of sandwiches, I was able to take home 3/4 of mine to enjoy the next day. (It was just as good!) 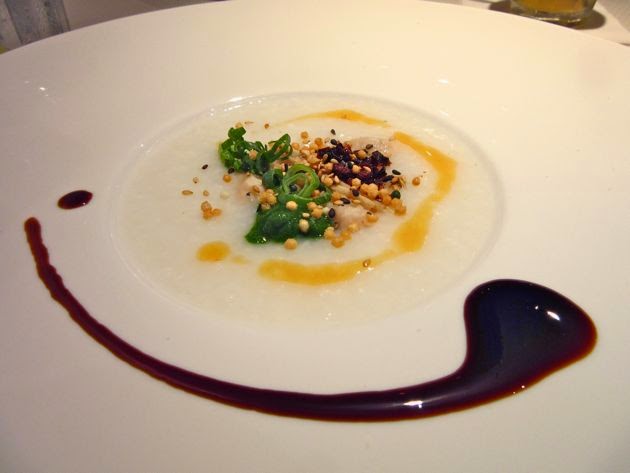 Next up was a soothing bowl of jook topped with scallions and scallion sauce, chili flakes, bubu arare, chili oil and Indonesian sweet soy sauce, all meant to be stirred in. Because the shoyu was more sweet than salty, a pinch more salt and heat would have been nice.

By the time Donburi Chen—named after fellow chef William Chen who prompted Wong to add it to her menu—arrived, I was sad I had but one stomach. As delicious as this sweet chili glazed pork and egg combo was, I could not finish. 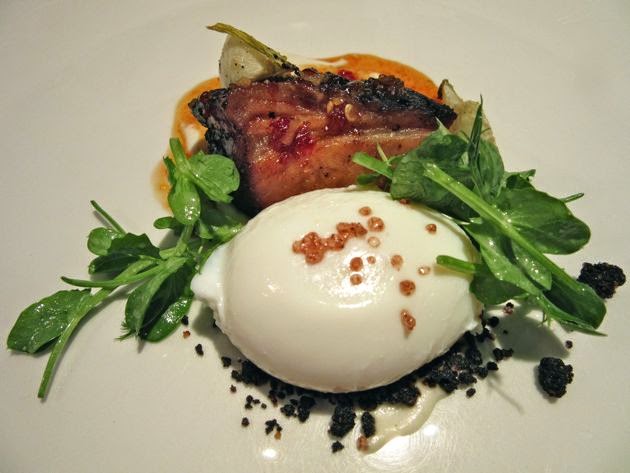 I could not finish the pork belly and certainly couldn’t add carbs to my opu so a course of Okinawan soba with miso smoked pork and caramelized and crispy fried onions also came home with me. 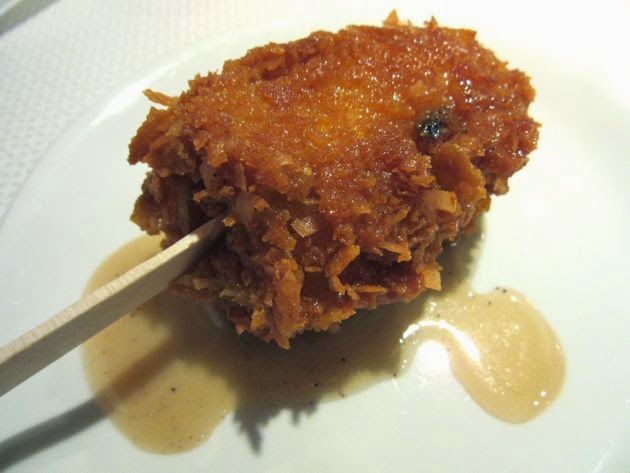 Dessert was cornflake-crusted banana drizzled with lehua honey, that Wong said we should be able to finish in one bite, but no, after the feast that came before, I could only nibble. This is one instance in which I wish I could have started with dessert.
———
Nadine Kam is Style Editor and staff restaurant critic at the Honolulu Star-Advertiser; her coverage is in print on Wednesdays and Thursdays. Contact her via email at nkam@staradvertiser.com and follow her on Twitter, Instagram and Rebel Mouse.
Posted by Nadine Kam at 3:20 PM