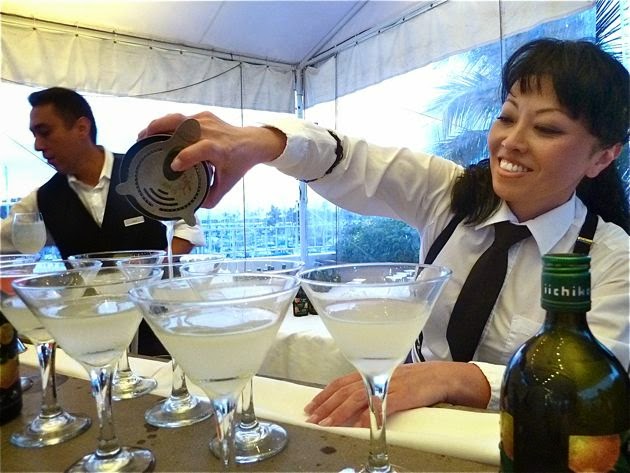 There is such a thing as being too popular. I first tasted iichiko’s Bar FRUITS YUZU and Bar FRUITS UME at Honolulu’s ART after DARK back in May and wondered where I could get my hands on more. They’re so light and refreshing, and with only 8 percent alcohol, just my speed.

As best-sellers in Japan, iichiko couldn’t turn out enough to meet demand, so at the time was slowly introducing the bar liqueur, comprising iichiko’s concentrated barley shochu and fresh fruit, to restaurant clients.

At that time, only a few bars were offering it, but a lot has happened in six months, and iichiko Bar FRUITS YUZU and Bar FRUITS UME can be found at nearly 80 restaurants and bars in Hawaii. They’re that good, and are naturals for cocktails. Bar FRUITS YUZU offers a blend of yuzu and honey, while UME is balanced with lychee.

The Bar FRUITS YUZU recently received a Double Gold Medal at the San Francisco World Spirits Competition, one of only 10 winners in a field of 1,474 entries.

Iichiko held a launch party Nov. 3 in The Modern Honolulu’s Sun Suite, announcing that their popular shochu liqueurs will be available in retail stores beginning January, a great way to start the new year! 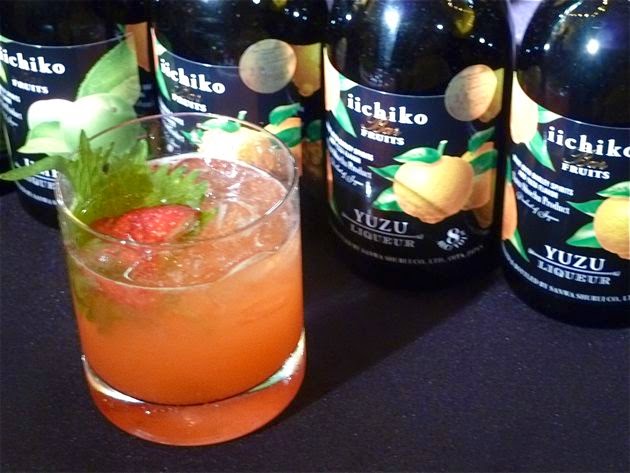 
Iichiko USA CEO Kazunori Nishi shared some interesting stats about the brand, as well as the rise of shochu, which surpassed sake in popularity in 2002, with an upward trajectory ever since, which he attributes to people learning that shochu leaves them with no hangover. 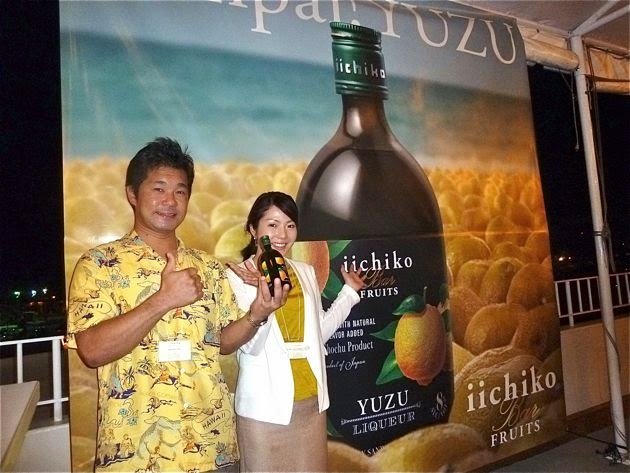 The company was born in Oita prefecture in Japan, where “iichiko” means’s “It is good.”

In Japan, Bar FRUITS YUZU and UME are enjoyed simply, on the rocks. But here, bartenders are finding them fun to experiment with. During the event at the Modern, we were able to sample cocktails pictured on this page, as well as a Lemongrass Yuzu Fizz made with iichiko BLU, iichiko Bar FRUITS YUZU, Pacifickool Ginger Syrup, lime juice and club soda, and Yuzu Pink Drop of BLU, Bar FRUITS YUZU, yuzu sorbet and Campari.

This month, the following locations will be offering tastings or highlighting menu and bar items featuring iichiko shochu and liqueurs:

Through Nov. 16
Shokudo will offer a limited special menu featuring a play on their popular Honey Toast, with iichiko YUZU, along with specialty cocktails made with iichiko Bar FRUITS YUZU. 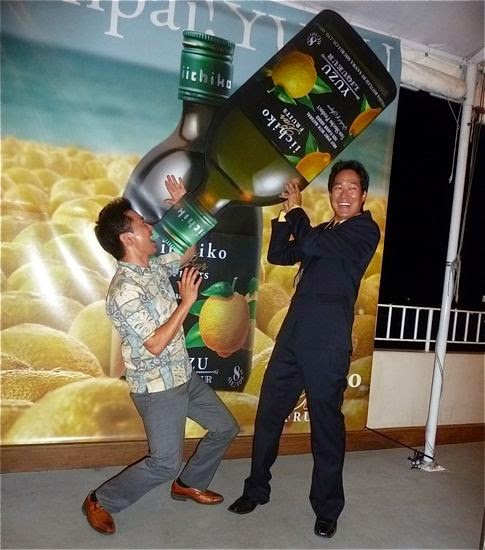 A little shochu gets the party going. Toby Tamaye has a little fun with iichiko USA’s Tetsuro Miyazaki, left. 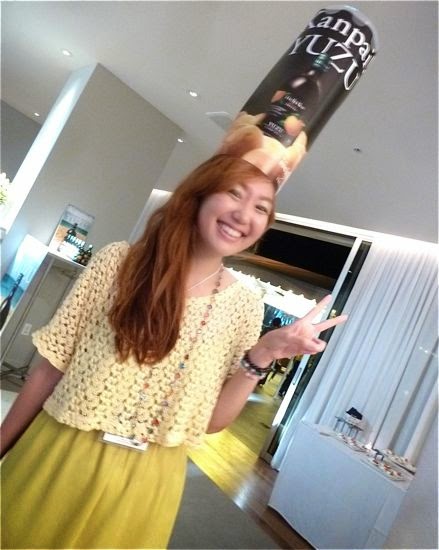 Before you know it, guests were rolling up posters to accessorize the yellow ensembles we were asked to wear to celebrate YUZU. Lindsey Muraoka in YUZU yellow. 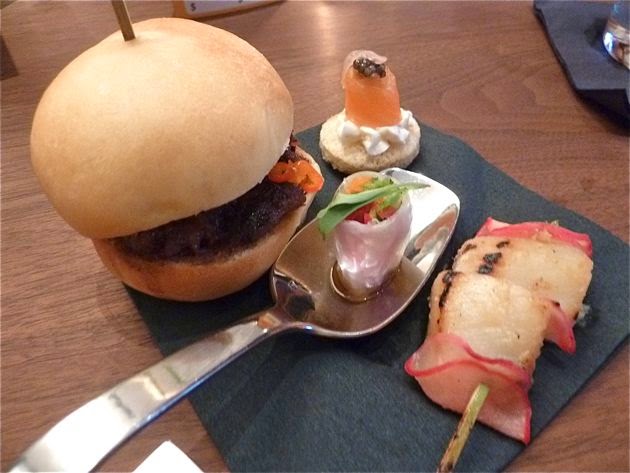 Some of the bites accompanying the iichiko cocktails were a pulled pork slider, mini veggie springroll and scallops with pickled radishes on skewers. Thanks for the food styling, Cory Mitsui! A favorite bite, not pictured here, was a cube of truffled mac 'n' cheese. 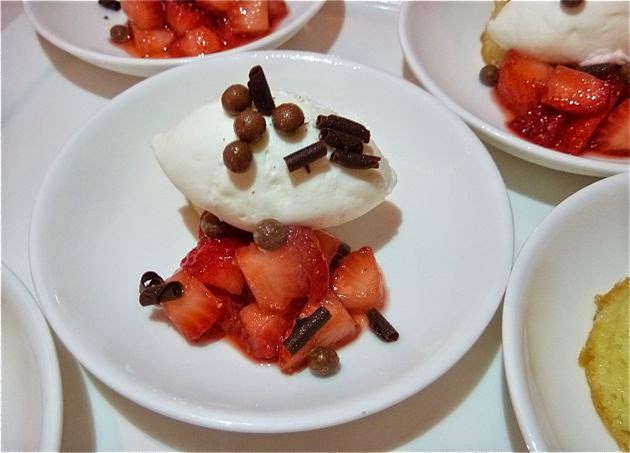 For dessert, there were yuzu marshmallow s’mores, and shown, strawberry shortcakes. 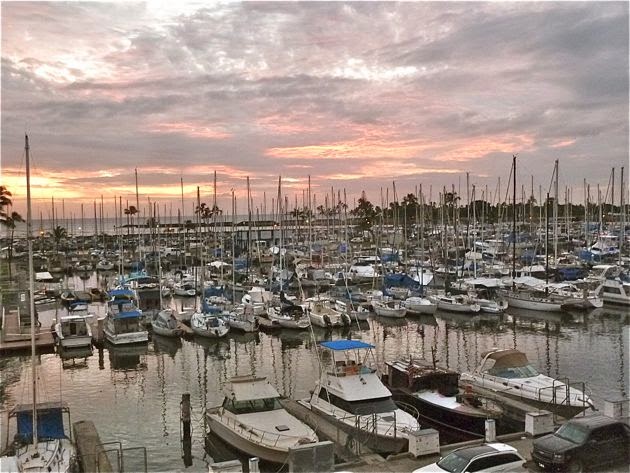 The Sun Suite setting, overlooking the Ala Wai Yacht Harbor, offered another gorgeous sunset view. I’ve been racking up a lot of sunset photos lately, a beautiful way to close the day.
Posted by Nadine Kam at 6:17 PM